Gifting the Zululand battlefields with Orgonite

The purpose of this trip was orgonite gifting the Zulu heart land and there particularly all those historical battle fields that hold so much symbolic meaning for the forming of what is now the modern post-apartheid nation of South Africa.The main roads defining the perimeter of this large area had been done before.Of course we would do all the entropy transmitters on the way, but the main idea was to pacify the lingering spirits of those decisive battles between Zulus, Englishmen and Boers like Isandlwana, Majuba, Rorke's Drift, Spioenkop, Ulundi etc... 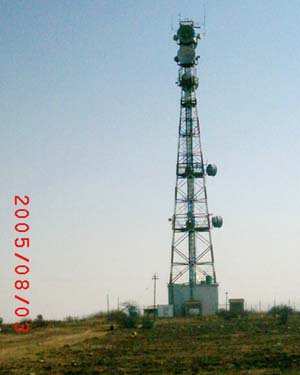 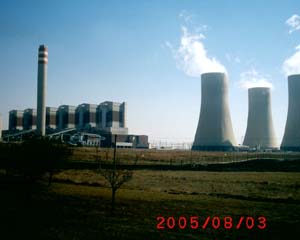 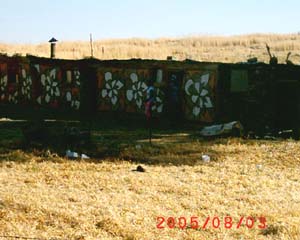 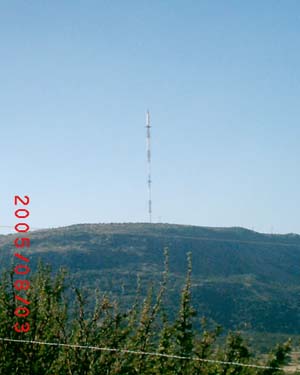 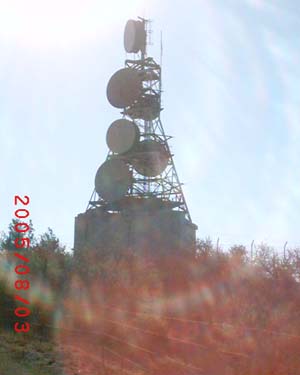 Orgonite to the Battlefields: Majuba 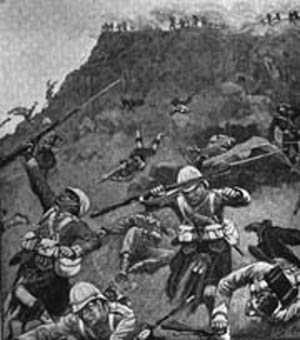 The Battle of Majuba The battle of Majuba in 1881 was the first battle in the First Anglo-Boer War, known to the Boers as the "Eerste Vryheidsoorlog" (First Liberation War).In it a numerically inferior Boer militia  defeated a British contingent. The British Commander fell in battle.This was the first of a series of pitched battles that finally (but only after a policy of scorched earth with burning of farms and incarceration of women and children in the first ever concentration camps where tens of thousands died under unspeakable conditions) led to the crushing of the independent Dutch / Afrikaans speaking Boer republics (Zuid Afrikaansche Republiek and Oranje Vrystaat) and incorporation of the Goldfields of the Transvaal into the greedy British Empire.These goldfields at times produced 70% of the world's newly mined gold.The Boers are really a somewhat tragic people, since right after they had snatched the land from the blacks, (of course never acknowledging that it ever belonged to the Blacks) the English came after them and snatched it from them. And not surprisingly they did so after the gold finds at the Witwatersrand had proven substantial. The battle site was bought by the Ossewa Brandwag, a popular right wing nationalist Afrikaner movement that strongly sympathised with Nazi Germany in World War II. Surely a place to leave some gifts at... 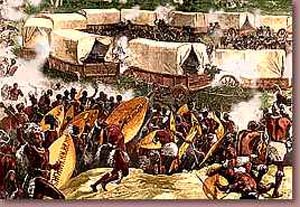 Almost no event in South African history divides the nation deeper than the battle of Ncome or Blood River. A Party of Boer Voortrekkers under Andries Pretorius repulsed a superior force of Zulus, killing about 3000 without suffering any losses except 3 wounded. This happened after a Party of Boers who had been at the Royal Kraal of Zulu king Dingane for negotiations were slain by the Zulus, an act that was seen by the Boers as ultimate treachery.So the astounding victory over a large Zulu Army, won from the defensive position of the "laager", a ring of ox wagons tied together and the gaps filled with "fighting fences", was hitherto celebrated as something like the mystical founding day of Boer Nationhood.No wonder that the same event that meant "deliverance" for the Boers, was a national catastrophe for the Zulus. Zulu elder Credo Mutwa told me some of the things he knows about the background of these events:According to the oral history handed down to him the slaying of the Piet Retief Party at the Royal Kraal was the result of a British intrigue, whereby a missionary resident at that Kraal sneaked into the royal harem, a serious crime that could only be answered with death under Zulu law and made it appear that the Boers were the perpetrators. Thus they were killed as "sorcerers" who had violated important taboos in Zulu society.Whether this is true or not is beyond my scope of research, but wouldn't it fit nicely into the British strategy of "divide and rule" that was so successfully employed everywhere in order to subjugate much larger peoples the world over, skilfully setting them against each other in order to finally rake the winnings when all other combatants where exhausted...According to Credo, the Zulus were almost self sacrificing themselves at the Battle of Ncome by endlessly storming with their spears against the cannons and rifles with practically no hope of entering the laager alive. This must have been out of a feeling of guilt for the murder of the Retief party that was of course a sacrilege under Zulu law and customs as well. 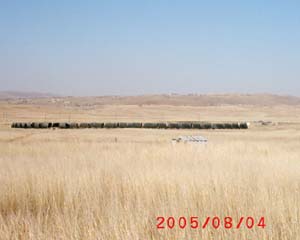 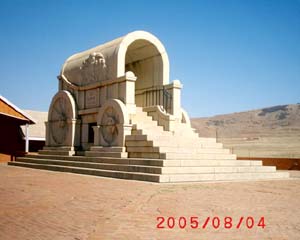 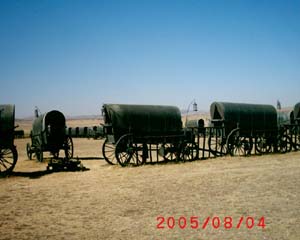 More of the Laager Monument

The "New South Africa" has built a new museum on the other side of the Ncome River to represent the Zulu side of the story, but it lacks the monumental kitsch and grandeur of the gigantic 1:1 reproduction of the laager on the Boer side and the marble replica of an ox wagon in front of he museum.. The Day of the Battle was one of the main commemoration days of Apartheid South Africa, a day were blacks had not much to laugh. It is now still commemorated as "reconciliation day" in an attempt to build the "rainbow nation"...When I last checked however Afrikaners were still celebrating around the laager in traditional Boer costumes, waving placards like "apartheid is heiligheid" (apartheid is holiness), while the Zulus were celebrating on the other side in a rather hostile and un-reconciled fashion.You would agree that some massive orgonite gifting of the place was appropriate, wouldn't you? 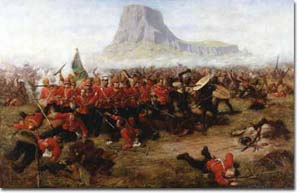 The Battle of Isandlwana - First defeat of the British Empire by an indigenous people The Battle of Isandlwana in 1879 was the first defeat of an English colonial army at the hands of the colonised people. This had never happened to them in Arabia, India or wherever they chose to expand their empire.My heart goes out to those brave Zulu Warriors who overwhelmed the supreme firepower of an arrogant occupational force! No graves remember their fallen heroes. The battle site is full of masonic symbolism. Not less than 5 Obelisks etc...We went on via the battle site of Rorke's Drift from where we wanted to continue to Ladysmith and later to Ulundi, the "Great Place" of king Cetshswayo, where the Zulus suffered their final defeat in the Anglo Zulu War and still a center of traditional Zulu power today..Unfortunately that was not to be as we had a terrible car accident on the way. Was somebody trying to stop our advance? 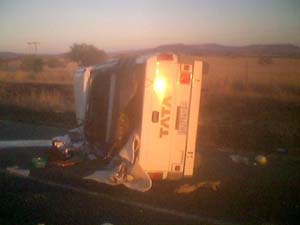 Before we could reach the royal Kraal of Ulundi, Mr Tata met his very own Isandlwana 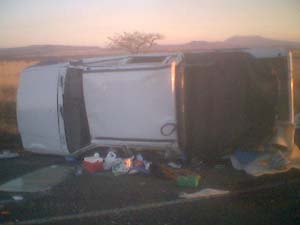 We felt like a defeated army - napoleon in Russia or something like that.This is of course highly speculative, but isn't it strange that I had 3 almost fatal accidents within a time span of a bit more than 2 years and all on these busting expeditions? The 26 years before that I had only minor bumps and never caused an accident of such severity.In all three cases there was a moment of blanketing, a missing time of fractions of a second. This accident was completely unnecessary. With no other vehicles involved, I suddenly found myself getting carried out of a sharp bend and rolled sideways 2 times after a misguided attempt to correct the steering.Luckily there were no trees or large rocks, so after the frightening tumbling stopped we stepped out and noticed we were unharmed. Our luggage, a CB and a few hundred TBs were strewn about and luckily the whole population of a nearby village gathered and helped us collect our stuff and generally cheered us up while we were waiting for the police and tow truck.The CB we had brought for Ulundi was left with our hosts in Dundee, the owners of a little B&B where we had spent the night and had to spend the next night now as well..They proved unexpectedly open to the whole idea and were very grateful for the gift. I think the CB is in good hands there and we definitely have to come back and finish our job in Zululand. 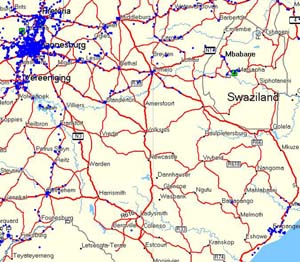 Situation before our trip 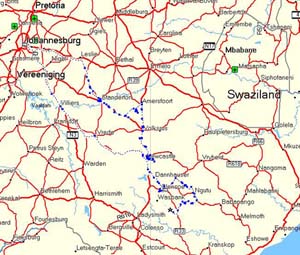 The aborted mission, petering out near Dundee 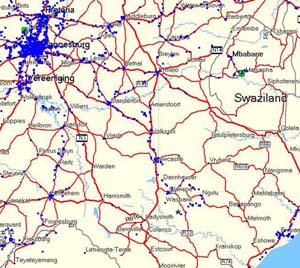