Another Story of healing by Tina v/d Maas

I told you about Tina before. She’s been the one that inspired our health Minister Ms Manto Tshabalala Msimang to her “controversial” stand on AIDS, namely against the pharmaceutical protocols that have already killed so many needlessly. Even though Tina has never really received government funding for her work, she has 400 documented cases of people diagnosed with terminal AIDS and left to die in the rural Areas of Kwa Zulu Natal that were completely healed by her simple nutritional recommendation that consist of drinking a mix of lemon juice, olive oil and crushed garlic while at the same time getting off sugar and starch foods completely.  That’s how easy it is and it really works as the following story shows again. Tsepo’s (name changed but to protect his privacy) Story so far …

We met Jill, Tsepo’s mother in October 2004 during one of our 1st health talks we held in KwaZulu-Natal (KZN) when making the documentary “Power to the People”. She had adopted Tsepo, an “AIDS” baby, the year before (July 2003) after fostering him from the age of 6 months. (See “6 Months old Tsepo and 2 weeks at Jill’s home)She had already done her research on ARVs, which had her convinced it was not the road to go, but needed more information to get him well. By the time we met her, Tsepo had already been in and out of hospital numerous times with pneumonia (a total of 7 times), TB, diarrhoea etc. etc. For whatever reason, she did not put Tsepo on our Wellness Program as in her own words it was too difficult to get it in. He did not “like" it

We lost touch with her, till Friday, the 14th March when she phoned me. I don’t want to go through all the emotional stuff, but the line about Tsepo was, he was dying, and was given up by all the medical professionals, from doctors, nurses, homeopaths, naturopaths, etc., each giving her the message to “let him go” and “to end his suffering”. They put their money where their mouths were by all sending them both home without any treatment, the hospital even refusing to admit him. On top of his TB, he had developed chickenpox  (See photos), and was struggling to breath, his heart racing in overdrive. She told me he is a real fighter, and we know from experience that as long as a child has the will to live, you can pull it through. If on the other hand they have given up and are “tired”, even if you think they have a good chance of making it, you can stand on your head, but they will die. I again explained all this to her and told her what to do.  The last time he was able to stand he was 12 kg (5 years old and should be about 20 kg), and looking like a real AIDS child. We know that when we start them on the Program, they will always first loose weight, getting rid of a lot of toxins or “rubbish”, before starting to pick up weight.  With phone calls going backwards and forwards, Jill managed to get all the things in, literally spoon by spoon and the results were like always: After 1 day he was sitting up, after 2 days he could stand and shuffle a bit around, and started re-engaging with the world, listening and talking back. Every day there was improvement, or in Jill’s words: “A miracle”. 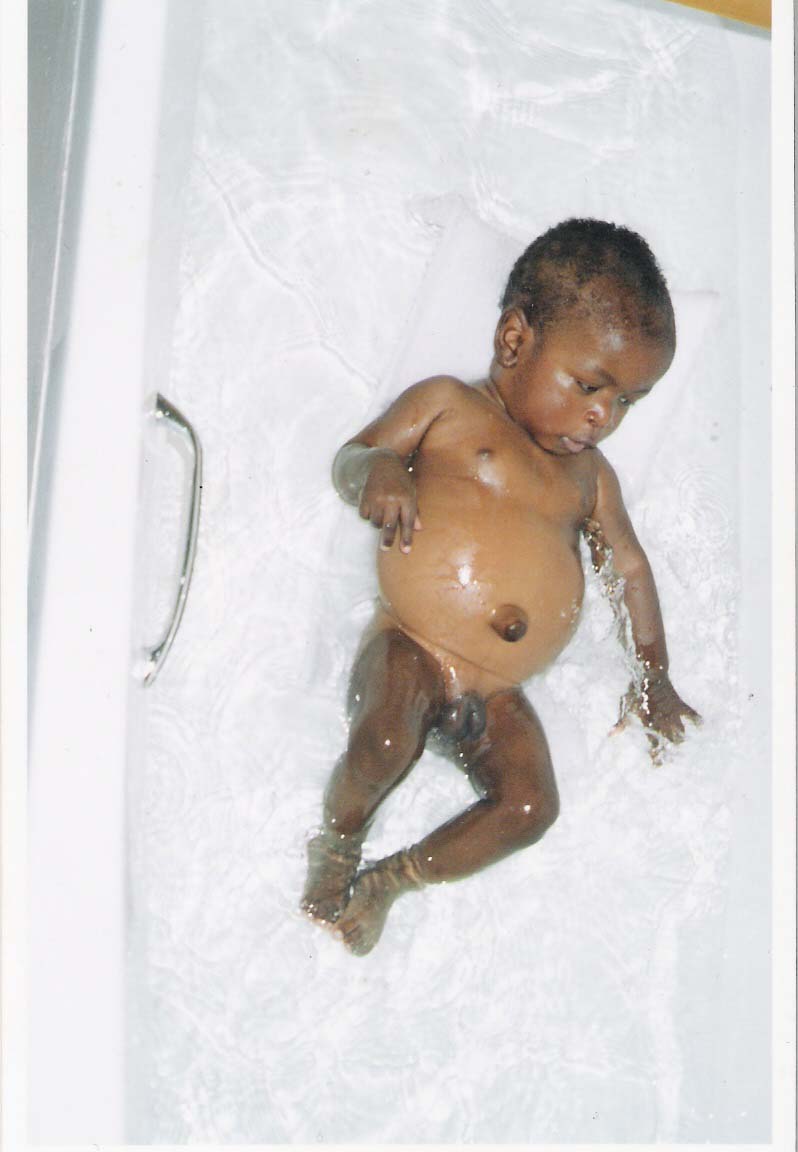 As he had been sick his whole life, Jill was afraid that he did not even love her anymore, as he was always so angry, not wanting to react to anyone, either spending time on her lap, her hip, the sofa or her bed. 2 Weeks later he walked up to her in the kitchen, grabbed her leg and said: “Mummy, I love you!” for the 1st time in his life. And so the miracles happened, everyday at least one:

In between there was one small drama and we learned some of their history. In 2007, he was so sick (again with pneumonia) that he needed to be admitted to hospital. This time, the doctor only wanted to admit him if Jill would give permission to start him on ARVs. (It was well known in this small town that Jill was refusing to put him on ARVs.) In desperation she agreed. This was on a Thursday. By Friday, the doctor called her into his office. First he told her that he would stop ARV treatment, as Tsepo was deteriorating so fast, and the ARVs were now too much too handle. Secondly, he told Jill to take some photographs of Tsepo so “She could see and remember what she had done to her son by refusing to give him ARVs much earlier” … In other words: You killed him! Thirdly he asked her if Tsepo had been baptised and if not, he would arrange for a priest to come and do the honours. Jill was so numb with grief, that she just let it all happen. The priest came, and with his thumb, baptised Tsepo with his thumb on his forehead, pressing so hard as if baptising an elephant. He then started praying, not for Tsepo’s soul, but for God to forgive “this women” for withholding ARV treatment from her son. She never saw either the doctor or the priest again during the next 2 weeks he was still in hospital. 3 Weeks after starting on our Program she got a phone call from the doctor in the hospital asking her if Tsepo was still alive. She told the doctor he was doing well and was playing outside as they spoke. He then asked her if he was on ARVs and when the answer was negative TOLD her that he is expecting her to attend a meeting on Tuesday morning to discuss his (ARV) treatment.  In complete panic she phoned me and then told me the above little story above about this particular doctor and the priest. I explained to her that last time I checked, ARV treatment was still optional, and that they could not take him away from her as she had legally adopted him. We even had a lawyer phoning her, to offer his services … if needed. We also advised her not to let anybody from the hospital or clinic into her home, and to otherwise phone the police and lay a complaint of harassment and even to go as far as to get a restraining order. Luckily this has not been necessary yet. In the meantime, Tsepo is thriving. Saturday, 11th May he: 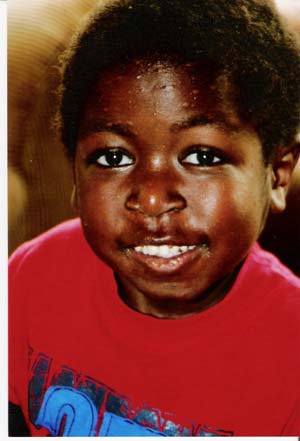 Would you believe that is the same boy as shown above just a few weeks after starting the nutritional programme? Last week he saw on TV a child with cerebral palsy. When Jill explained to him that the child was very sick, Tsepo quickly suggested that the child should also go on the lemon juice.Would you belive it's the same boy? The one thing that still needs to improve is his liver. In a perfect world he should have a liver function test and a scan as his belly has been extended right from birth. However, after the way they both have been treated by the ‘professionals’, we will have to wait to find less hostile conditions. He is not yellow, his eyes are clear, and if it had been cancer of the liver, he would have been dead by now.

On our program liver functions improve by about 10 - 15% per month, so we will be following this closely and have increased the lemon/olive oil/garlic mixture. We also know that even if the hospital doctors decide to try and force him on ARVs, the danger is over, as CD-4 counts go with an average of 150 per/month. Even if he had started with 1, he should be over 200 by now, and protocols prescribe ARVs below a CD-4 count of 200. Jill said it best: “I have got my little boy back!” Tina van der Maas The background to this story is the relentless character assassination campaign against Manto Tshabalala-Msimang and everybody who resists the official reading of an "AIDS pandemic" by the TAC, (Treatment Action Campaign) a pseudo grassroots organisation (David Icke calls that kind of artificial outfit an “astro-turf organisation”) that advocates massive roll out of toxic ARVs and steamrollers everything that purports to be an alternative treatment. Meanwhile 18% of all patients who are on ARV treatment in South African hospitals die within the first 6 months.That’s while all those who did Tina’s nutritional treatment and stayed with the recommendations (!) are not only still alive after many years but actually thriving. Tina is a brave woman indeed and as you can expect, the mighty power group behind this complex and mean assault on humanity has not left a stone unturned to make life miserable for Tina. She’s been “robbed” 8 times (always coincidentally records were missing) and due to denial of recognition to her successes she’s been reduced to starving level by now. Tina has produced a broadcasting quality video of her work which is tear-jerking and I will offer that to you on my website as a matter of supporting Tina’s work. At this point it will just be home made copies as Tina has no more access to a professional reproduction facility.  We do believe that the Campaign for making ARV treatment mandatory and pushing a large percentage of South Africa’s population through this deadly mill is an outright attempt of massive population culling, in line with the illuminate strategy of getting rid of “useless eaters”. (Henry Kissinger)Creating awareness of how senseless and fraudulent the paradigm behind this campaign that is orchestrated on all levels of society is, will help to stop it.Also the simple demonstration of successful healing of hopeless cases with proper nutrition, zappers and orgone energy can help to deflate the pompuous claims of the pharmaceutical cartel. Is it not funny that alternative healers get slapped with court restraining orders for claiming  they can “heal AIDS”, like recently Dr. Mathias Rath,  while the press and TAC can use the word combination “life prolonging AIDS drugs” for ARVs even though all clinical evidence is to the contrary. It is an amazing case of mind control and manipulation of public perception that is unfolding right in our midst and goes unnoticed by the majority of our brain entrained population.   Viva the “psychotronic age”, properly announced by Ex-US-president Carter’s Security bagman Zbigniew Brzezinski already in the 70s! We are there, but we are also waking up in numbers, so Illuminati beware, your days of roaming freely are numbered and those of you that participate in the mass murder knowingly will be held to account. It is still time to jump ship and become a hero by exposing the multiple scams that are perpetrated today.