From time to time, when I'm very stressed, it's good to look back at what has already been achieved.

So I've just gone into my files and produced these maps that show how the cover of little orgonite gifts has slowly expanded over larger and larger parts of this beloved continent.

Our "gifting career" started some time late in 2001 with the first CB that brought us astounding results.

Only then did Don and Carol also come across the urgency of neutralising the microwave towers or "deathforce transmitters", to use a more accurate term.

I still remember how I sneaked up to my first tower with a pounding heart and dug in a HHG (Towerbusters were not yet invented then) under a group of trees nearby.

First, of course, we started to gift our neighbourhood in Johannesburg and then started our first little trips. Characteristic in that period was that we always got quite dramatic results when putting up one of our orgonite cloud busters.

Typically in a blue sky, a ring of very nicely articulated cumulus cloud would form, surrounding a blue hole. This would later collapse toward the centre, implode so to say and in most cases this implosion would be followed by strong rain. 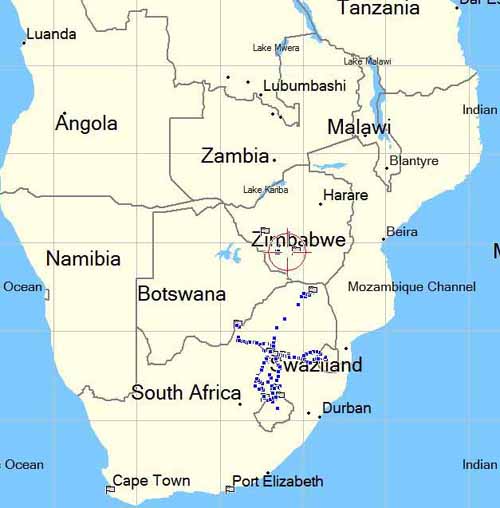 Our humble beginnings - gifting up to February 2003

Towards the end of 2003 "predictions" of a major drought catastrophe for Southern Africa were being circulated in the orchestrated press. Front page photos of emaciated villagers were beefed up with dire predictions of the impending death of 10 million people in Southern Africa.

We have learnt to read "predicted" as "planned"  which is one of the little tricks for the discerning reader to extract at least some real information from the corporate "What To Think Network (WTN)" Just know that whenever the say they predict something, they have actually planned it to happen. This of course triggered us into real action, albeit our means were very limited then.

After going to Uganda with Don in late 2003 we extensively gifted the Northeastern parts of South Africa, especially the stretch along the Kruger Park, where endless concentrations of HAARP towers (all cellphone masts double up as weather warfare and Mind Control weaponry) were blocking the moisture from the sea (Mozambique) from coming inland.

This unleashed major and lasting rainfall over the Mpumalanga and Limpopo provinces of South Africa and further inland. (see http://www.orgoniseafrica.com/krugerbarrier1.html and following expedition reports) 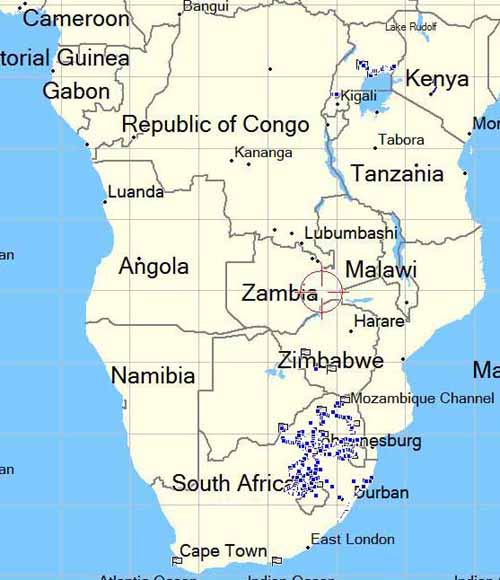 The subsequent busting of the Indian Ocean coast of Kwa Zulu Natal province helped consolidate this success. A major breakthrough was achieved in September 2004 with our busting expedition to Namibia, our first large overland expedition to a country outside South Africa.

Deploying 5 orgonite cloudbusters and about 1300 tower busters (TBs) and neutralising more or less Namibia's complete tower network which is concentrated along the major roads in this thinly populated desert country unleashed the greatest rainfalls in recorded history. (That's since the white man arrived with his ideas of metereology etc.)  It was also a major breakthrough as now the Indian Ocean and the Atlantic were now linked by a network of orgonised routes. We also employed a new tactic for the first time, where we would place orgonite in all dry river beds we crossed, working on the assumption that under the dry beds underground water veins would carry the orgone into the surrounding countryside. I believe the results showed that this was a viable tactic. We also had our first go at gifting from the air by chartering a 6-seater Cessna 210 out of Walvis Bay to gift the Namib Desert between W-Bay and Lüderitz, a stretch of 400km unaccessible terrain. Gifting on land on our way out and into the sea on the way back.  Read about this expedition on www.orgoniseafrica.com/desertrain.html

another very succesful enlargement of our orgonite coverage was the trip to the Eastern Cape over Easter 2005, (www.orgoniseafrica.com/obstaclerun.html) which resulted in major rainfalls in the region, ending a precarious drought. A major natitional Highway, the N2 was washed away as a result, but overall residents of the region described to us a restauration of the natural rainfall patterns of their childhood. 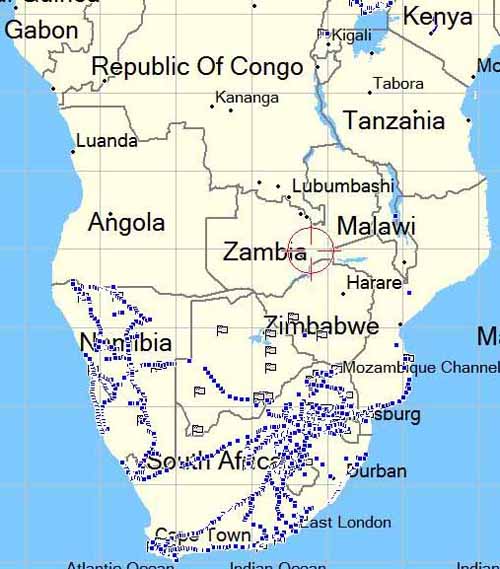 The second half of 2005 and saw a trip to Mozambique (http://www.orgoniseafrica.com/mozambique1.html) and our first "Naval Orgone Attack" by embarking on a cruise ship with lots of most of the time fairly drunken people from Durban to Bazaruto Island in Mozambique and back, where we left some 300 Orgonite Gifts in the water. (This was the beginning of our "orgone necklace around Southern Africa" project that we have now expanded to a length of  over 4000 km of orgone gifted coastal waters.

A planned round trip through Zimbabwe, Mozambique, Malawi, Tanzania, Kenya, Uganda, Burundi and Rwanda ended with our temporary imprisonment in Zimbabwe and asomewhat shortened itinerary. But we met the wonderful Dr. Chipangula in  Malawi, president of the Malawi International Council of Traditional Healers whom we entruted most of our orgonite which he duly distributed all over Malawi, ending another manufactured drought there with abundant rainfall. (www.orgoniseafrica.com/prisoners.html) A short trip to Zanzibar in December 2006 allowed us to gift that island where 400 dolphins had just been found dead, probaly as a result of US-Navy activity and by liaising with our Kenya based Friend Judy Lubulwa, we could get some serious water gifting done in the channel between Dar-Es-Salaam and Zanzibar. 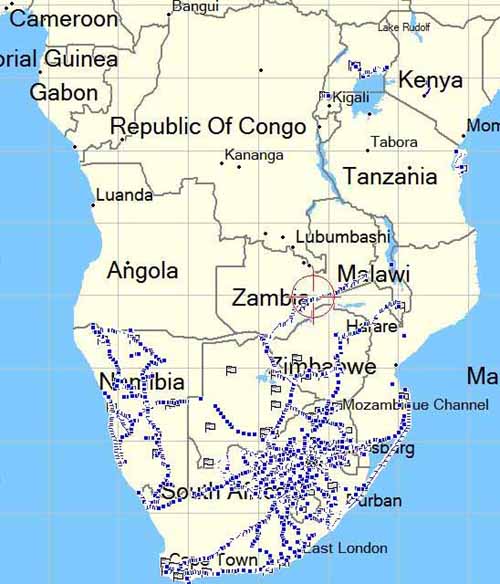 In the first half of 2007 we closed the last really big ungifted spot in South Africa by gifing the Karoo, the large, almost uninhabited semi-desert in the central and south-western parts of the country.

(www.orgoniseafrica.com/vastinterior.html) Our plans to continue the Orgone Necklace of water-gifting the coastal waters by means of cruise ships was contiually thwarted by strange coincidences. One cruising company where we had already booked a passage went out of business. The freight ship of Namibian Friends who were offering us passage from Cape Town to Walvis Bay sank under strange circumstances. This situation was only going to change with the aquisition of my own boat for the first Zambezi tour in May 2007. In late 2006 and early 2007 the Monster of manufactured drought had been rearing it's ugly head again in Zimbabwe and Zambia, both countries bordering the great Zambezi River that flows from the Angolan and Zambian Highlands into the Indian Ocean in Mozambique, one of the major streams of Africa. The psychics on www.ethericwarriors.com, especially Carol Croft, identified Lake Kariba as the crucial spot to gift in order to unblock the rainfall again.

Interesting then that Credo Mutwa had written about Kariba extensively in his book "Indaba my children" identifying it as a major holy place in Africa that had been deliberately desecrated by damming up the river and  dislocating the spiritual custodian of the place in the 1950s by the then "Rhodesian" colonial government. (www.orgoniseafrica.com/zambesi.html) 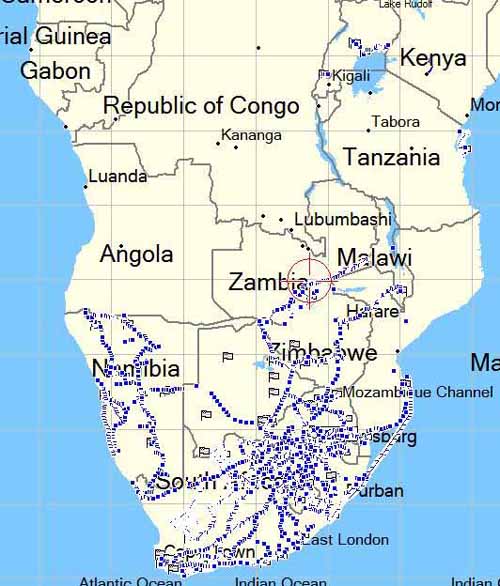 The boat that I had bought for the Zambezi trip, then totally inexperienced with boating, had to undergo serious upgrades before I could take it out to sea and the same was true for may own  abilities as a seafarer.  I had to learn for an pass a skipper's liocense that involved some very adventurous sea lounch instructions in the high surf of the Indian Ocean.

This done, we started gifting the coast of the Western Cape in several trips in November 2007, December/January 2007/08 and March 2008 This resulted in the whole coast from cape Town to East London being gifted. A stretch of some 1200 km. (check http://www.orgoniseafrica.com/Allthatwater3.html and following)

By end of January we had been able to get on another cruise, this time on the Royal Mail Ship RMS St. helena from Cape Town to Walvis Bay. (http://www.orgoniseafrica.com/cruisade2.html) Only the small stretch between East London and Prt edwards remained unorgonised now and that was closed in another cruise from Cape Town to Durban just recently in December 2008.

In July we went up to Central Mozambique and Malawi to gift the great Lake Malawi, the southern part of the Great Rift Valley faultline that stretches from there up to Lebanon and is considered to be the energetic spine of Africa by some who have looked into the subject of earth power points 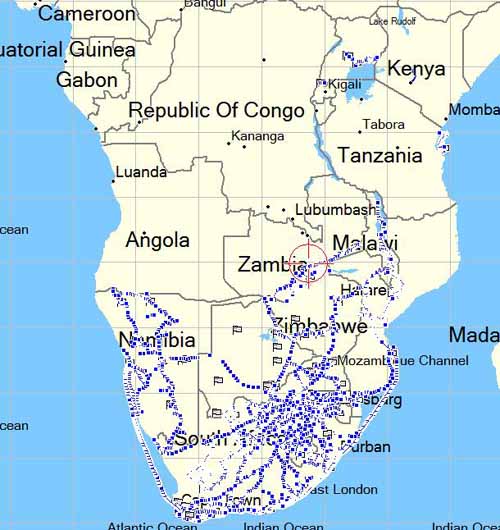 Status of orgone gifting End of December 2008 - The Orgone Necklace in coastal waters is complete and uninterrupted for more than 4000 km.

The Results: abundant rainfalls,  in the region with very few dry patches left. The  major negative scenarios have been stopped from unfolding. No massive droughts with 10 million starvation victims.

Of course the NWO agenda for souther Africa is still going on, althiough we feel that it's already lagging behind schedule.

The greatest acheivement: There is parctically no more chemtrail activity ecxept for very sporadic attempts to white out the sky in very localised spots.

We have also not seen the widespread herringbone patterns of HAARPed skys  for some years now. The sky looks lively and enegetic 80% of the time at least.

The next big move is planned in April, where we will follow the mighty Zambezi all the way down to the sea and connect this mighty band of positive orgone with our ocean gifting by closing the gap between the Zambezi delta and Bazaruto Island on sea. My trusted little boat had to make way for a slightly bigger one with 2 engines for added safety as we are going to be very far from "civilisation" at times on this trip. The waterways to be gifted stretch about 1200km and the road trip involved will be some 5000 km.

You can support this  venture by coming along (still 2 places available, contact me on georg@orgoniseafrica.com) and contributing to the cost, or by donations