Was Fukushima another seabed nuke?

The jury is still out on what caused the tsunami. My gut says it belongs in the same line of fake events as the 2004 tsunami in Java, the fake quakes in Haiti, Chile, China. This is covert warfare. Some sources like Zuernovah Starr - Livingstone say it was done with sea bed H-Bombs (like Java 2004)The reactor was spiked with small tactical nukes to make it look like the tsunami did it according to the same sources. The leaked radioactivity was then to cover as an explanition for the raised radiation levels due to the original sea bed nukes. Apparently the tsunami did not go off as planned (it was supposed to be 175ft high and kill a lot more people) and so the scam got somewhat exposed. The Japanese government apparently knows who did it and a lot of US military personnel stationed in Japan left very suddenly.

After the attack: This is what environmental warfare looks like

Apparently the Japanese were about to reveal an industrially mass produced free energy generator size of a box and able to power a small factory or a residential block.

Japan has little to gain from the power play around oil with no military muscle to compete with the Anglo-US-Israel axis. So they are indeed the most likely candidate to break the deadlock around free energy and go mass production first.

Reports of officially tested "over unity devices" have been coming out of Japan for years. Be this as it may, (our psychics at EW saw this tsunami as being caused by a space weapon) orgonite in general helps against nuclear fallout if this should become a real problem.

It is very hard to assess how real the danger is because the news are contradicting each other on an hourly basis. I belive there is a lot of scaremongering going on at the moment. It is now an open secret that the nuclear reaction (ultimate and accelerated entropy) cannot take place in a strong positive orgone field.

"Another DOR-creating problem was atomic testing within the desert region. Reich was later to consider the possibility of immunizing the atmosphere against atomic explosions, much as living systems are immunized against infection. By creating a highly 'orurized' atmosphere, he reasoned, the DOR energy from atomic blasts or from Ea could be siphoned off. It was noticed that during the ORUR operations, there were 'coincidentally' many publicly announced postponements of atomic tests."

In the early days of the orgone gifting movement (circa 2001/2002) we heard of an Australian guy who made noises about this simple fact and got visited by 4 rather sinister "men in black" like types who made it clear to him that they wished him to shut up about it or....

So, no matter how much you are scared of the recent incidents (better not, cuz that's what "they" want) or not. Gift your local nuke plant with orgonite and maybe add a few of our new "nuke busters" to make it count. 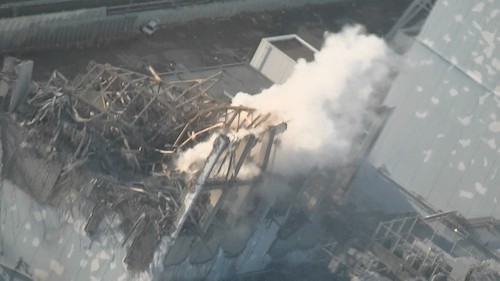 Steam coming out of no. 3 reactor at Fukushima

It seems that enough orgonite brought close to the reactor core or into the cooling water circuit stops the nuclear reaction.

Ultimately the radiation coming off a nuke is hard electromagnetic radiation similar to the microwave emitted by death towers (falsely labeled as cellphone towers) and radar sites, only a lot stronger.

Please note: I'm not advocating that you grab a piece of orgonite and walk into a highly radioactively polluted site, assuming that you cannot be harmed. That would be stupid. Just like the cellphone towers don't stop radiating with orgonite, only lose their DOR, the physical properties of the radiation measurable with our scientific instruments at the moment will stay pretty much the same initially. Am I talking in riddles? For example a cellphone chip (like our minishields) does apparently not change the thermal effects of the microwaves emitted by a cellphone.

Your brain will still get about 0.5 degree Celsius hotter after talking for 30 minutes. And yet subjective impressions, muscle testing and conclusive plant growth experiments show the energetic change effected by the orgonite and it's vitalising and protective effect on living organisms. Most likely the disease causing effects are not the thermal ones and also not the electromagnetic energy that you can measure in Watt/cm2. So gift your nukes in the neighbourhood with ordinary orgonite or use our special ones that have been optimised with gemstones and other ingredients known for their radiation absorbing, protective properties. Apparently there are a lot more nukes around than officially admitted. Every child knows that mini-reactors are powering submarines and aircraft carriers. The same compact encapsulated nukes are being used to power death tower sites and much other secret NWO-tech. The giveaway factor are the cooling ponds.

Typical cooling pond for subteranean mini nuke (they call it waste stabilisation pond, but watch the sky after gifting one of them)

Don Croft writes about this extensively. They seem to be quite common in the US. I haven't seen them here in South Africa, but we found one in Kabale, Uganda in 2003. If you see a pond that looks supicious, lob one in.

It can not do any harm anyways. Gifting stagnant algae infested water bodies always clears them and improves the energy around be the nuclear cooling ponds or not. My friend Carl has gifted numerous ponds on golf courses (while playing) and found that they all cleared up nicely. They were mostly slimey and green from all the fertilizer and pesticide run-off before gifting.

To optimize the radiation absorbing properties we have made a special TB - the nuke buster - now.

Please refer to the product description below for the exact ingredients: