Was Haiti Earthquake a nuke or other exotic weapon?

The article below is presently making the rounds on the net. If the information is true, it would confirm what our friends in the Chat have already seen psychically. I'm talking about the chat in the German Forum www.cb-forum.com now. I'm not sure if the EW-psychics have identified the same.

We are pretty sure that the Tsunami on 25 December 2005 that devastated Java was a nuke.

There's not only "psychic seeing" as evidence but quite a bit more. Reports in the Indian "Times" about the untypical seismic signature of that quake were augmented by a first hand report from a friend who was there as part of a German rescue team. They measured heightened radiaoactivity on the beach and found that the corpses of the victims were not eaten by sharks and other fish, as there were no such fish around. 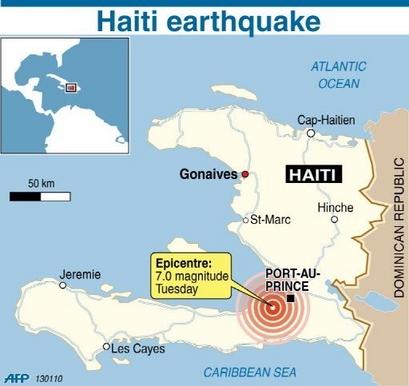 A grim report prepared by the Russian Northern Fleet for Prime Minister Putin is stating today that the catastrophic earthquake that has devastated the Island of Haiti was the ‘clear result’ of a United States Navy test of one of its ‘earthquake weapons’ planned to be used by the Americans upon the Persian Nation of Iran but had gone ‘horribly wrong’.

The Northern Fleet has been monitoring US Naval movements and activities in the Caribbean since 2008 when the Americans announced their intention to re-establish their Forth Fleet that had been disbanded in 1950, and which was responded to by the Motherland when later that year a Russian flotilla led by  nuclear powered cruiser Peter the Great began their first exercises in this region since the ending of the Cold War.

Though virtually unknown to the American people, the use, and perfection, of earthquake weapon technology has a decade’s long history that began with the former Soviet Unions exploding of a 10 megaton nuclear bomb in September, 1978 and then ‘redirecting’ its shockwave towards Iran where it resulted in a catastrophic 7.4 magnitude earthquake, an event which hastened the downfall of the US backed regime headed by the Shah.

This attack upon Iran by the Soviets was countered by the Americans in April, 1979 when they unleashed one of their newly developed ‘atomic powered’ earthquake weapons against the former communist Nation of Yugoslavia which resulted in a 7.2 magnitude earthquake.

Since the late 1970’s, the United States has ‘greatly advanced’ the state of its earthquake weapons and, according to these reports, now employs devices employing a Tesla Electromagnetic Pulse, Plasma and Sonic technology, along with ‘shockwave bombs’ they have previously been accused by Russia of employing in their war against the Afghan peoples when one of these ‘devices’ was exploded in Afghanistan in March, 2002 triggering a devastating 7.2 magnitude earthquake.

Interesting to note in these reports they are stating that the earthquake weapons test conducted by the US Navy this week in the Caribbean that destroyed Haiti was ‘most probably’ based upon the same type of Tesla technology held responsible for the catastrophic January17, 1995, 6.8 magnitude earthquake that laid to waste the Japanese city of Kobe, and which the mysterious Aum Shinrikyo cult had warned 9 days prior was going to occur, and as we can read:

“Aum’s charismatic guru, Shoko Asahara, predicted the Kobe quake nine days before the event.  In an 8 January 1995 radio broadcast, Asahara stated “Japan will be attacked by an earthquake in 1995.  The most likely place is Kobe.”  Hideo Murai, the late Science and Technology minister for Aum Shinrikyo also adhered to this view.  Murai - said to have been the most intelligent Japanese who ever lived - was murdered in a Yakuza orchestrated assassination shortly after speaking on the record to foreign news correspondents. “Murai presented his allegation in an April 7 1995 news conference at the Foreign Correspondent Club in Japan.  In answer to questions about the Kobe quake, Murai said “There is a strong possibility of the activation of an earthquake using electromagnetic power, or somebody may have used a device that applied force inside the Earth.”

The Aum leadership believed the Kobe quake an act of war: “The City of Kobe was hit by a surprise attack…” they claimed, adding the City was an “…appropriate guinea pig.”

Note: The Aum Shinrikyo religious order was destroyed shortly after their releasing of this information to the public when blamed for the March 20, 1995 sarin gas attack upon the Tokyo subway system which resulted in 11 of their members, including their leader, being sentenced to death. FSB reports on Aum Shinrikyo further state that their knowledge of the planned use of these ‘doomsday’ devices was gained from the US computer hackers belonging to the Branch Davidian religious order who had penetrated some of the American defense establishments most secret files and resulted in their, likewise, being completely destroyed in what is now known as the Waco Siege ordered by then US District Attorney, and currently Obama’s  US Attorney General, Eric Holder.

The Tesla weapons being developed by the United States are based upon the research of Nikola Tesla who was an inventor and a mechanical and electrical engineer. He was one of the most important contributors to the birth of commercial electricity and is best known for his many revolutionary developments in the field of electromagnetism in the late 19th and early 20th centuries. Tesla's patents and theoretical work formed the basis of modern alternating current (AC) electric power systems, including the polyphase system of electrical distribution and the AC motor, with which he helped usher in the Second Industrial Revolution.

Tesla is also credited as the inventor of modern radio by the US Supreme Court. To Tesla’s earthquake weapons research conducted in the early 20th century we can further read:

Important to note at this point are that modern day experiments seeking to discredit Tesla’s earthquake weapons technology have been directed against structures designed to withstand the effects of earthquakes, buildings which in the early 20th century, like those in Haiti today, were not built to withstand such resonance.

A most critical difference when viewed in the light of the US Navy’s testing of 2 of these earthquake weapons this past week and where in their Pacific test it resulted in a 6.5 magnitude earthquake hitting the area around the Northern California city of Eureka causing no deaths, their Caribbean test has caused an estimated 500,000 innocents to die. Equally important to note are these reports stating that ‘more than likely’ the US Navy had ‘full knowledge’ of the catastrophic damage this earthquake weapons test could potentially have upon Haiti and had pre-positioned their Deputy Commander of their Southern Command, General P.K. Keen, on the island to oversee relief efforts if needed.

To the end result of these weapons being tested by the United States, these reports warn, are for the Americans planned destruction of Iran through a series of catastrophic earthquakes designed to bring down their present Islamic regime. Most unfortunately in all of these events are the peoples of Haiti, who are suffering under conditions so horrible, that even in the best of scenarios, their functioning as a viable Nation has completely come to an end, and for reasons and purposes they have no comprehension of at all as they have become just the latest victim in the New Great Game that will decide the winners and losers of this 21st Century.