Since Oprah featured the book "The Secret" in her show, manifestation has become a popular theme, rapidly proliferating in the realm of mainstream "self help" literature and spiritual books. "The law of attraction", "radionics", "how to manifest abundance" are the important keywords. Since millennia people have used "magical" tools in order to influence the etheric realm in favour of a desired outcome.  Orgonite wands and what we call SP-crystals are the latest and potentially most powerful addition to this  arsenal of "manifestation aids" in the arsenal of the orgone warrior or anyone interested in practical magic and manifestation.

I: Applications of Orgone Wands and SP-Crystals

Boosting is an activity that we etheric warriors engage in on a regular basis. You can read more about it on www.donebydooney.com.

What is "boosting"? Basically it's  sending energy with intentional direction. Boosting becomes even more powerful when done in a group.

When we boost negative human, not so human or etheric beings with the intent of neutralising their negativity, (we do a lot of cleaning up in the ether every week) we call that "blasting". Boosting and blasting is an effective and proactive defence against etheric or radionic attacks. All serious gifters sooner or later find themselves subjected to such dirty attempts to make their lives miserable.

That's where we work in a group with at least 1 or 2 "clairvoyant" or "psychic" participants.  It really helps to go back to the source of such attacks and walk up the "dirty chain of command". We do the same on a global level in order to deactivate the negative parasitic agenda on all levels.

What role does a PW or SP-crystal play in this process.

Many of you who read this have some understanding of "shamanic processes". You will then also know that it's the human mind that does the work. But powerful energy tools like especially the  PW DeLuxe help us to develop an awareness of this energy. We will then find it much easier to visualise a target and direct the energy towards it. Experienced "boosters" do not need such "crutches" though.

In a way, Manifestation is then a special form of boosting. Sending energy towards a desired outcome. Manifestation has been a part of all cultures before the victory of the mechanistic world view in the 15th and 16th century.

The Tibetan prayer wheel, the wishing candles in catholic churches, coins thrown into sacred wells in order to manifest prosperity, these are just a few examples.

And surprise, surprise: They all work!

The difference between Radionics and Boosting is that in Radionics the INTENTION is represented by a WITTNESS, while in BOOSTING it's the ACTIVE MIND that directs and channels the ENERGY. Radionics is "Boosting for Lazy Jacks" you could say.

All radionics machines have some kind of energy source. That's ORGONE, doesn't matter how they call it. So we could say that all effective Radionics machines work according to the formula ORGONE + INTENTION = MANIFESTATION.

How do you use for example a PW DeLuxe (and I would not recommend less for this application if you are serious about results) for Manifestation?

Simple: You just write your wish or intention on a piece of paper and slip it in the leather sheath of the PW. That's your witness.

There's a lot more to know about manifestation. There are certain spiritual laws to it. An Orgonite PW will not allow you to manifest negative or destructive intentions.

A very good introduction to the world of Manifestation is Donna McCallums book "The fairy Godmother's guide to getting what you want". It explains a lot of the  spiritual and psychological dynamics of manifestation. Well worth the read. You can order it on Donna's website.

Just having an SP-Crystal or one of our wands in your immediate presence, blocks out most electronic surveillance devices and gives you protection against psychic spying (remote viewing) . Many gifters have reported that they stayed miraculously "invisible" to snooping government goons who would otherwise have harassed them on their gifting missions. I even heard a report that it helps with speed traps. (no guarantees here)

The pulsed scalar field is creating a "white noise" that is difficult to penetrate for etheric predators. Apart from that and to a different degree - depending on the type of SP or Wand - these devices do of course generate a strong orgone field with all the stimulating and  healing effects that go with it. Carrying one of these devices is essential for gifting trips to avoid complications.

(Gifting is not illegal, but the New World Order gang hates it and has trued to harrass gifters again and again)

Especially the Wands are creating a very focused and directed orgone beam. It follows naturally that this beam can be used for topical healing. Directing this beam at an affected body part, will definitely have a revitalising healing effect.  When you begin to understand that on some level every disease is energetic stagnation, this will make sense to you. One of my earliest customers of the PowerWand DeLuxe reported a cqase of spontaneous cacer remission just from having the PW on in his room. I'm telling it as it is, not making any generalised claims of course.

The first such animal was the famous SP crystal. SP stands for Succour Punch or in American spelling Succor Punch.

It was borne out of a necessity.

As the Orgonite gifting network developed, it became apparent that a whole army was being mobilised to stop us in our tracks, because we were making a difference from minute one.

Orgonite was the stone in David 's slingshot that could really bring Goliath down.

But over and above that it became apparent that the new world order has armies of dirty psychics in their employ that would try to mess with our consciousness in many ways.

This was an effort appart from the infiltraton of forums with agents* of different degrees of subtlety and the creation of fake orgone gurus with great following and much fanfare. This is the usual way by which normally everything that could have an impact on the occult hierarchy's fear based empire is brought down by inner strife and corruption. This is the reason why we authentic orgone gifters who convene on Etheric Warriors (www.ethericwarriors.com) and a few other forums such as the German www.cb-forum.com have never tried to create a structure. We will never elect a president or appoint a last authority or allow guru worship to come in our way.

*The word “agent” comes from latin “agere”, the infinitive form of “to act”. An agent “acts” for a third party. This does not necessarily imply that the agent needs to know the agenda of the party he acts for. He may be (spell-)bound into this service by means of mental corruption, greed, fear, vanity, blackmail. He may be a victim of trauma based mindcontrol or just plain power hungry, drugged, hypnotised, or otherwise unbalanced. I explain this to clarify that an agent is not necessarily someone who has been in a military breefing room, where a crew-cut-cleanshaven instructor from Langley with rectangular jawbones has ordered him to go and sabotage this or that orgone forum. He could just by that fuzzy-brained dope head hippie type who really comes over totally anti establishment. Capisce? That's what I'm talking about.

Given these attempts at undermining our efforts in typical “divide and rule” fashion,

we needed something to defend and protect ourselves

That's when the Succor Punch crystal was born. Again, as so often in this effort, the credit goes to Don Croft. (no, he's not our Guru, he's just contributed immensely to this effort)

Mobius coils have been around before and were kind of known in the alternative border science research community.

This is what Wikipedia.org has to say:

The Möbius strip has the mathematical property of being non-orientable. It can be realized as a ruled surface. It was discovered independently by the German mathematicians August Ferdinand Möbius and Johann Benedict Listing in 1858. The shape of the Möbius Strip probably dates to ancient times. An Alexandrian manuscript of early Alchemical diagrams contains an illustration with the visual proportions of the Möbius Strip. This image, on a page titled 'The Chrysopoeia of Cleopatra, has the appearance of an Ouroboros, and is referred to as the 'One, All' 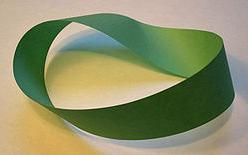 A mobius strip can easily be made from paper

Note the alchemical connection here. Mobius coils have been experimented with in "border science" for a while. They are said to create a scalar electromagnetic field, a STANDING WAVE or FORM WAVE rather than a moving wave. This is where physical electromagnetism blurrs into the etheric. ETHER is ORGONE, is CHI, is PRANA is ZERO POINT is ULTIMATELY CONSCIOUSNESS but you can also call it QUANTUM FLUCTUATION, TORSION FIELDS or the NON MANIFESTED CLOUDS OF PROBABILITY. It seems that the way our mobius coils are made, they are producing a zero strength measurable conventional electromagnetic field. Just the scalar field. Now imagine such a knot slipped over a nice, pointed crystal.That was the step Don took to create the SP and pulse the Möbius Knot with a 15Hz pulsed DC from his standard zapper circuit. 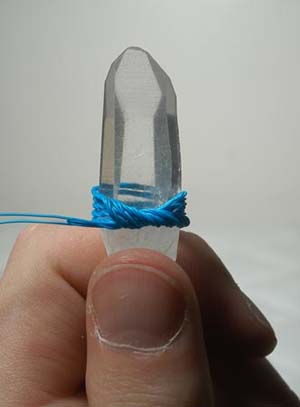 The SP-crystal seemed to create an etheric white noise, virtually making the gifter “invisible” to psychic spies and also blocked out a lot f electromagnetic survellance like the weak signals of implanted microchips or even bugs planted in cars of active gifters.

after the SP crystal was the Power Wand (Don Croft again). It was a logical step, embedding a humangous pointed crystal, wrapped in numerous mobius knots in Orgonite and inserting this contraption into a copper pipe for a more directional energy. Several gemstones were added and it was found that an additional spiral coil was giving the energy even more direction. Don only allowed Andy Schwarm, the founder of www.ctbusters.com and probably the first vendor of Don Croft style orgonite tools, and ourselves to replicate his proprietary design. 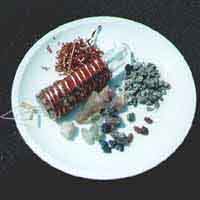 The finished product  is a powerful orgone generator with many applications. The energy is so strong that most people that we've tesed can see and feel the energy.

is a further offspring of the orginal SP-crystal. A hybrid of Cloudbuster and Powerwand, it combines the range of the CB with the Power of the mobius pulsed wand concept. 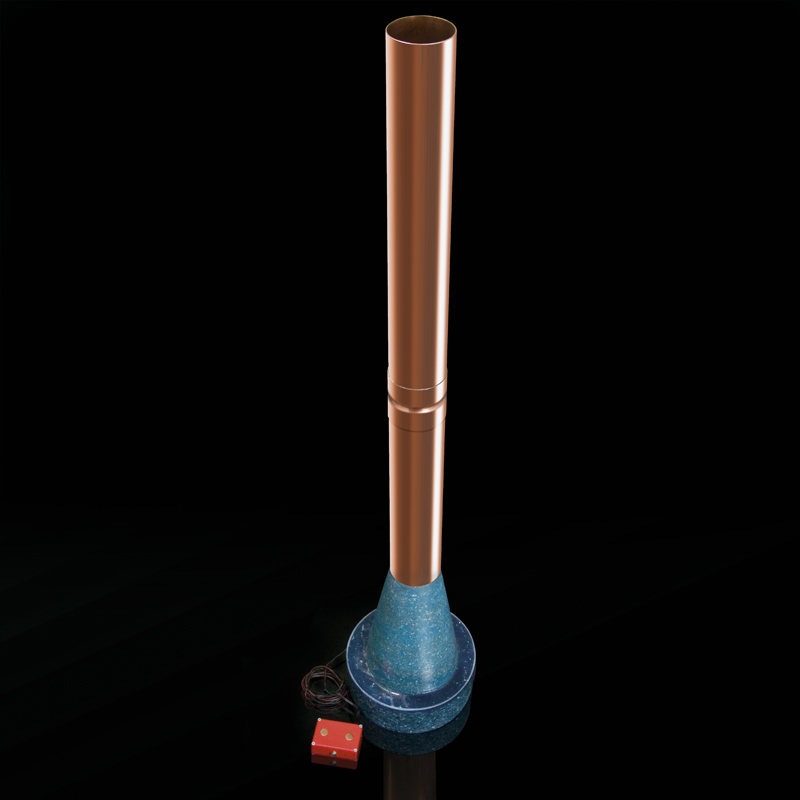 III: Which Tool for which application?