For the last 1-2 centuries countless pioneers have braved the odds and organised ridicule by their more streamlined scientific colleagues and presented the world with working free energy machines. Often found out intuitively, these devices contradict the alleged 2nd law of thermodynamics according to which energy can neither be created nor destroyed.

Unfortunately for that law, the devices worked until the full power of the established world order crushed down on these intrepid challengers of the enshrined paradigm and crushed them thoroughly.

How many genial inventors have been murdered, bankrupted, driven into social or professional isolation in the 20th century?

Postulating the existence of an all encompassing life energy that is actually the essence of matter and all known and measurable aspects of energy means implicitly that "free energy" is possible.

Free energy in this sense is nothing else than tapping into the boundless counsciousness-/energy ocean or "quantum fluctuation" and channelling a tiny fraction of it into our perceived 3-dimensional world. We are doing that every day with our orgone generators that produce often astonishing makroscopic effects in the atmosphere with no visible conventional energy source to explain these motions of clouds in a "normal" way.

Our feeling is that there are now so many experimentors out there that the wave cannot be stopped.

We have also learned one thing in this battle for human freedom:

We have to ignore the officuial structures and drive this as a completely open source movement.

No use in registering patents or beeing secretive about your inventions. That's old school!

One of the most promising lines of thinking is the water car concept, where an adjustable electric frequency is pulsed through specially formed electrodes in a pressure tight water jar to create hydrogen on demand.

Quite a few of these are driving around in various stages of development and, hey, they cannot kill us all, can they?

The free energy comes in here because splitting the water molecule via its inherent resonance takes much less energy than you get by burning it in an ordinary combustion engine.

Let's go mass produce then, hey? (here's where the resistance is still extreme)

While I'm still busy getting my hands upon a functioning kit for a water conversion (I don't want to re-invent the wheel) of my car, a friend told me about an intersting experiment involving a simple Wilhelm Reich style orgone accumulator, used instead of the airfilter of an engine to extremely orgonise the inflowing air.(I'll attach the document here)

Since we deal with orgone all the time, we fealt immediate sympathy for the idea of just weaning a car from petrol, by simply charging it with orgone to the max.

The famous Joe Cell seems to be doing something similar. So instead of taking the detour through sophisticated electronics and other technolgies. 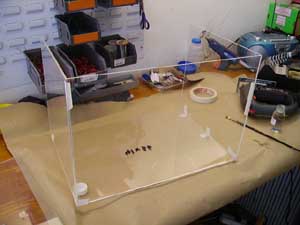 The box has two openings for in and outflow. if you want to work with a petrol car, a much smaller one is fine.I used 40mm plexiglass tube. 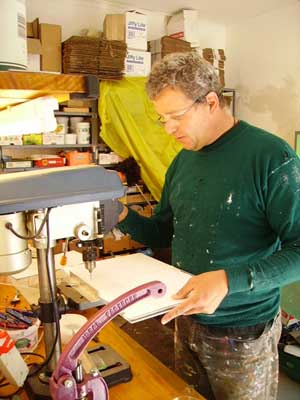 The box will get 2 baffles or "false bottoms" about 1.5cm from the cover with the holes.

These baffles should have about 300 holes of approx 1.5mm each in a regular grid. I drew the grid on a CAD program and glued it onto the plexiglass for drilling. If you have mm-paper, that also works. 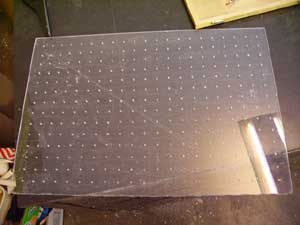 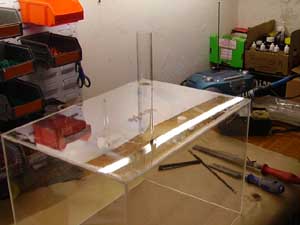 All connections must be absolutely airtight. Glueing of plexiglass is done with a solvent that creates like a welding seam of equal strength with the rest of the material. I did not trust the process entirely, because some edges of the plate were a bit jagged from sawing. So I caulked it with silikone on top of the glue. (Did not help much) 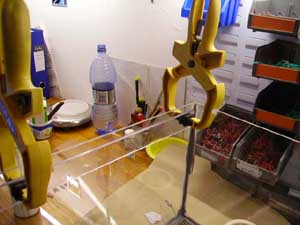 Preparing for the second baffle.

Between the baffles you fill in mineral wool to ensure a slow and well distributed airflow. This is also the purpose of the baffles. You want the air evenly distributed, so it will take the orgone charge from every bristle and strand of that mineral wool. 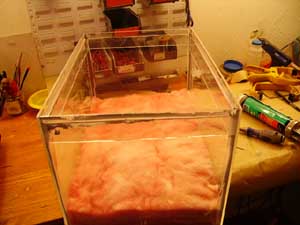 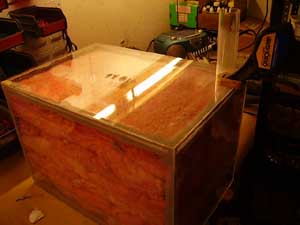 I did numerous air pressure tests with the box and there were still tiny leaks, so I decided to secure all edges with duct-tape after I had run out of the plexiglass solvent. 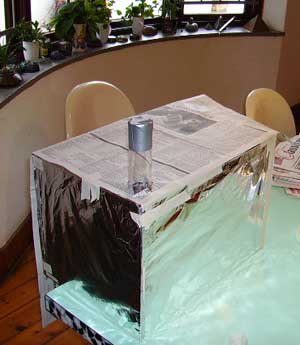 Then comes the Reichian part: wrapping up a christmas gift 40 times in newspaper and 40 times in aluminium foil. That was almost a week of work, believe it or not. 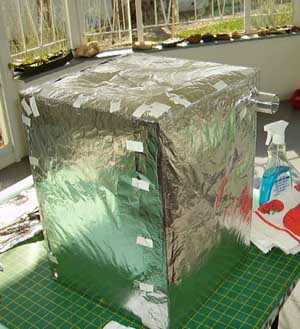 The original article on the orgone box

The final layer of aluminium foil is on. 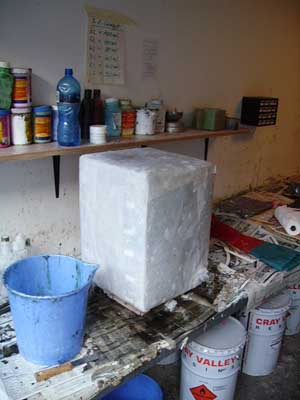 I felt that these layers were very vulnerable for the kind of field experiments I had in mind. So I wrapped a shell of fibreglass around it and then decided to make it even better by cladding the whole box in solid orgonite plate. (20mm) 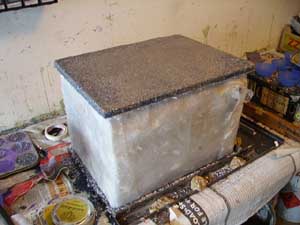 I used a professional baking plate with angle profiles that I can adjust to fit the size. 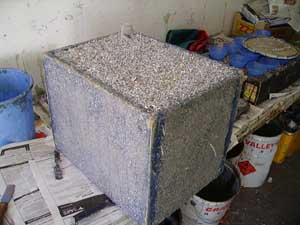 The last face of the box.