Strangely enough, I never really had the feeling of being under surveillance on any of my busting excursions.

This one was to be different...

Our dear friend Dr. P. from Uganda was visiting us for a few days in July. We had been travelling with him during our visit to Uganda in 2003 and stayed in contact ever since.

He has built the first orgonite CB in Uganda and successfully used zappers in a hospital environment.

We had briefly visited Pretoria before and DrP had spotted several places where he suspected underground bases of sorts.

So we joined forces with Fungai one day to have a look at busting some of these spots.

I had done a general busting of Pretoria a few years ago, but by now was convinced that it could be expedient to do some more now.

At the time of my first busting of Pretoria (must have been 2002/2003) I had received several hints at vast underground bases, often connected to airforce bases in the area.

This time however we wanted to "drift aimlessly" and follow mostly Dr. P's intuitive hunches.

When I drove into Pretoria from Johannesburg with him the first time in order to meet Fungai and some of his Zimbabwean friends, he had perceived several spots that seemed to cry for attention to our right. (East of the Ben Schoeman Higway)

When we set apart a whole day for busting Pretoria again, we started with the gigantic Mast near UNISA. That one was ringed with about 20 or so TBs and several Earthpipes. surely I had been much more stingy with my ammo in those early days. 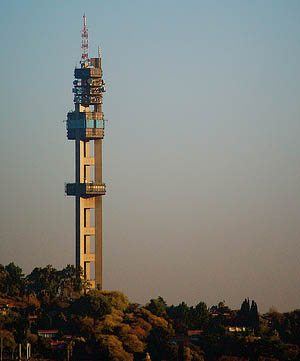 From there we drifted aimlessly (which means guided mostly by Dr. P's intuition) through suburban Pretoria, basically from tower to tower until we found ourselves getting from the extremely wwealthy suburb Waterkloof onto Waterkloof ridge.

As we left the suburb, tha last compound we passed turned out to be the "Secret Service Academy", a spy school! We surely hammered 2 earth pipes along the lon fence.

The whole ridge seemed to be abuzz with a very strange energy and that led Dr. P. to surmising that it might just be one great underground hive. 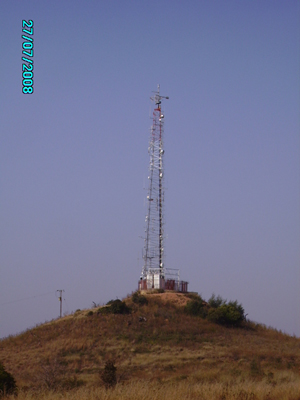 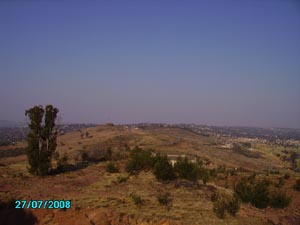 Strangely now, whenever we stopped we definitely felt watched. A white Audi A4 passed us to stop a few 100m behind us while we were out hammering. Then another one.

In fact most of the time there would be a white Audi behind and in front of us. Is that the standard issue spy car they use in the secret service academy?

Since I have experienced very little in the way of open surveillance so far in Southern Africa, this was new and exciting. 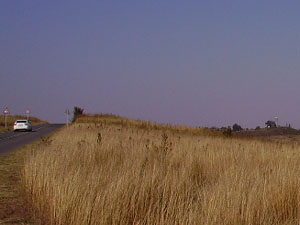 One of the many white Audi A4s 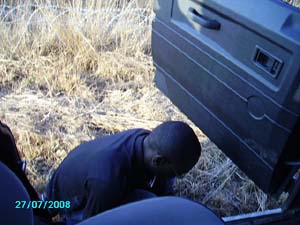 DrP hammers it in close to the door 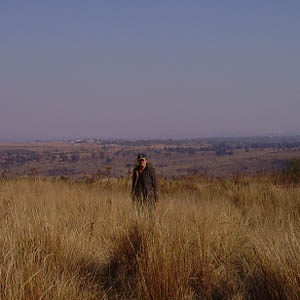 Even stranger it got, when we had stoppend again and a police van drove up to us. It was not on a routine patrol as we would later confirm because they would go back to where they came from and not continue in the same direction. They had been sent to check us out. Higher orders.

Luckily Dr. P has a very proactive mind and challenged the 2 cops to a lot of humorous banter, taking all the zeal out of them.

A communicative genius, I must say.

Fungai, equally alert,  stole away to catch the whole scene on camera. 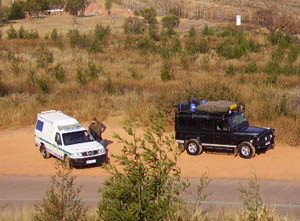 Police car sent to check us out 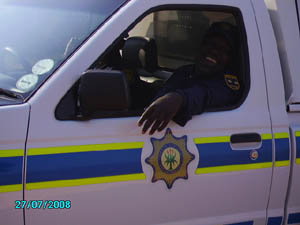 Charm and good humour can be an offensive weapon

But the weirdness was not to stop anytime soon. We had (by "aimless drifting") come very close to Fort Klapperkop, one of 4 old forts around Pretoria. Fort Klapperkop had been pointed out to me by erstwhile psychic busting companion Caroline as another alien underground base. We had busted it then (5 or 6 years ago) and she had reported that the alien activity there had died immediately after placement of the gifts.

And yet it seemed strange that we would end here again.

Fort Klapperkop is of course a museum these days and supposed to be a harmless family outing.

However the gate was closed and the guard inisted in telling us a very lengthy joke. The joke WAS actually funny, but took about 2 minutes to tell during which time we could not move on.

I had an eerie feeling that they were using this forced immobilisation to scan us in some strange way.

I also had a weird feeling of something dangerous approaching from behind. But it was of course invisible. 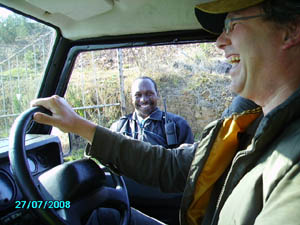 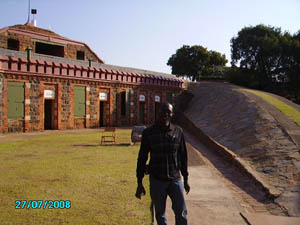 DrP inside the fort

Even the casual guards in the middle of the enclosure of the fort were untypically watchful and weird as was the man selling the tickets.

We used the same "weapon" as with the police: proactively chatting them up.

Of course there was no thought of putting earth pipes right there but we were able to hide some standard orgonite in good places.

2 earth pipes also made it in along the driveway from the lower gate to the top. 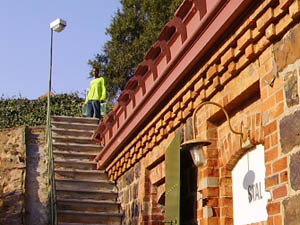 Fungai doing some footwork inside the fort 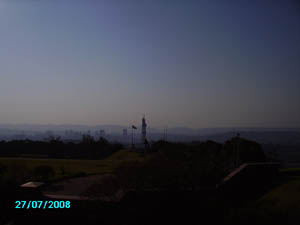 Looking at Pretoria from the Fort

To top it all up the same guard had another joke for us (again 2 min of scanning) as we went out.

On our way out we passed Waterkloof Airforce Base, another suspect for underground activity.

It had been gifted before, so just routine maintenance. 2 additional earthpipes and a few TBs at accessible places. 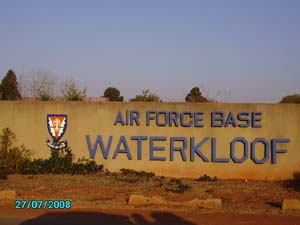 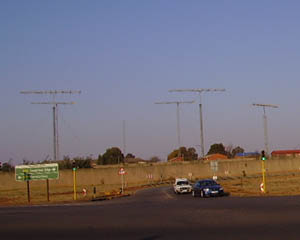 Strange Antennas on the AFB grounds

The psychic companion I travelled with 6 years ago identified these strange fishbone antennas as extraterrestrial stuff. Whatever, I say "in dubio busto" od, if in doubt, bust it.

A few final nails in the coffin of the  local representatives of the occult New World Order were hammered in and around Groenkloof Nature Reserve, apparently another somewhat hollow mountain ridge.

When I had done Pretoria with Caroline , she had alerted me to the fact that all the unbuilt Koppies (Buttes) were underground bases in Pretoria and kept free of human habitation for that very reason. The whole episode could be dismíssed as a product of our hyperactive Phantasy of course. But I've never felt so constantly watched over several hours and I don't think it was a human operation at all.

Who- or whatever populates these "underground bases" must have been very upset about our presence and instigated all this overt human activitiy. Caroline spoke of a hive back then and the energy felt like beeing near a beehive.

I thank my two intuitive companions for their wonderful alertness and swift and unspeaking coordination of actions.

This was really fun.