For a while now I've frequently been going on hikes with the Johannesburg Hiking club.It's a wonderful way to spend a day in nature and a great workout too.The club gets access to places that are not normally open to the public because all these wonderful climbs and hikes with their waterfalls and pools and far vistas are on private farms.So, last Sunday I was happy to find that the day's hike would lead us up a ridge in the Magaliesberg Mountains near Johannesburg that is adorned with a hectic array of towers.I had often already thought about how to get up there and plant some orgonite. Since I did not expect this opportunity I had come quite unprepared and could only find 2 simple towerbusters in the car to take along on the hike. But see, what a difference 2 simple TBs can make on a powerful installation like this: 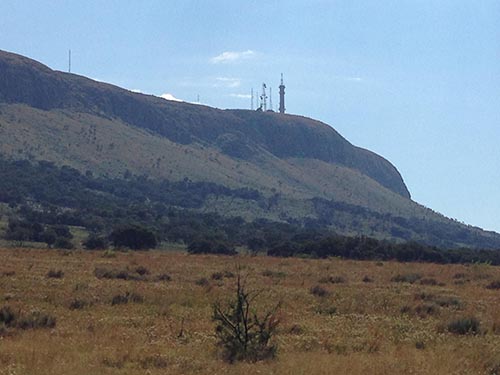 As usual, we find the sky looking flat, virtually 2-dimensional under the influence of the strong electromagnetic radiation. 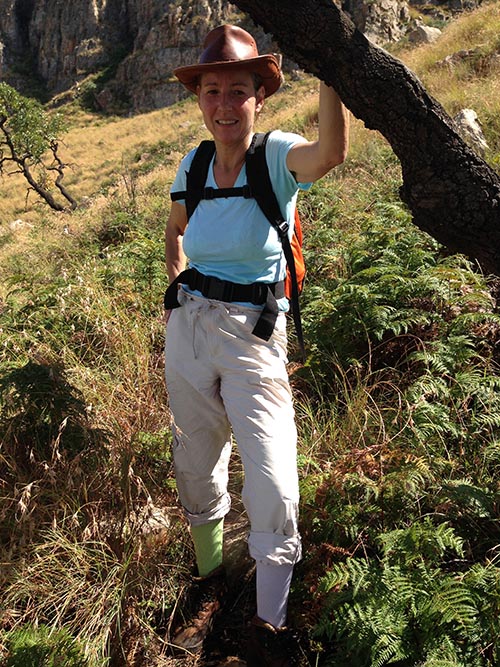 On the way up: a little rest 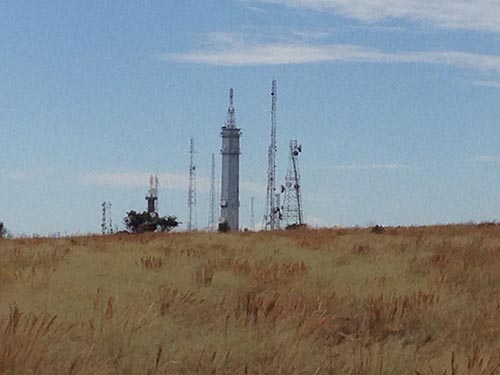 Trevor told me it's a military installation. And that was confirmed. Again, look at the "flat" appearance of the clouds.

People who haven't done any gifting on any noticeable scale often ask me about this or that type of tower, assuming that they all need different kind of treatment. Luckily it is much simpler than that. All strong electromagnetic radiation creates what we call a DOR field (Deadly Orgone Radiation) which could be described as the ether in a state of stagnation.This is equally true for nuclear radiation which is just another range of high energy electromagnetic radiation. Essentially orgonite unblocks the stagnating ether and even transforms the high powered "hard" energy that has caused the stagnation into living orgone energy. This process cannot be explained in mechanistic terms of the "old physics". Don't even try! We wouldn't believe it ourselves, if it could not be demonstrated again and again. Obviously we are standing at the verge of a new paradigm where energy and consciousness are intertwined, creating the beautiful complexity of our universe. 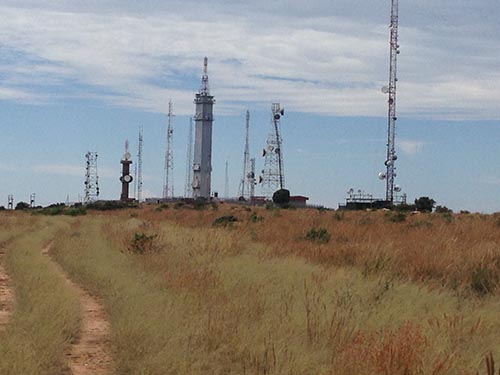 Only minutes after the gifting was done we can already see the clouds "fleshing out". 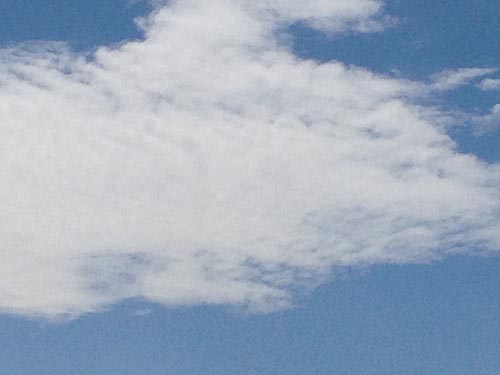 You can still see the typical ripple effect we always get over these powerful transmitter sites. But it's already transforming.. 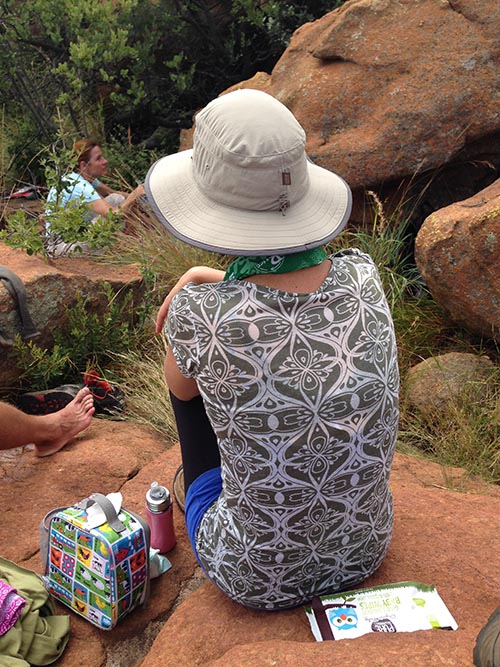 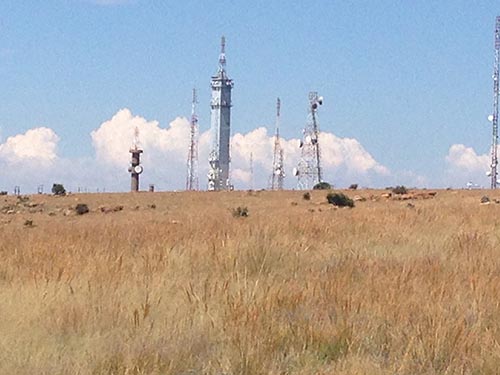 This is about 1/2 hour after the deed was done. You can clearly see a ring of happy cumulus clouds several miles in diameter (only segment of it in the picture) 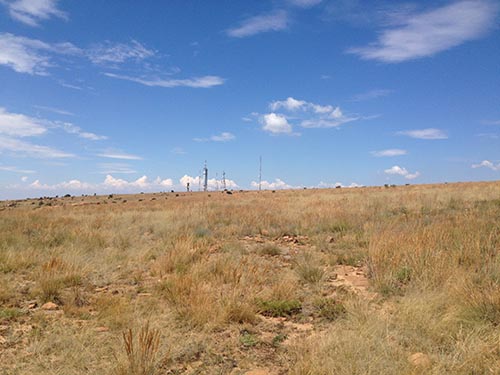 It's beeeg! Nevertheless we can also see that the clouds within the big ring are still a bit "HAARPy".That also shows the limit of only 2 TBs with a powerful installation like that. 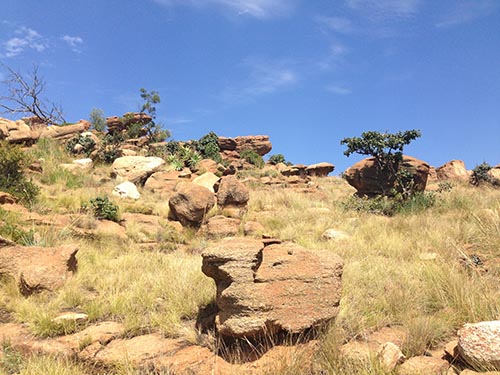 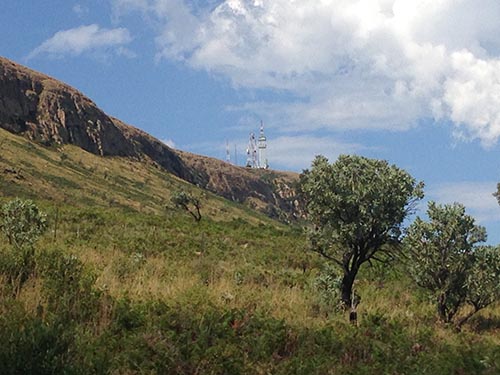 As we go down again, look how alive and fresh the sky looks now 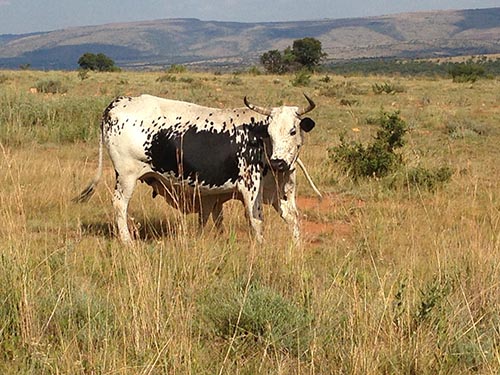 I had to include this beautiful Nguni (the indigenous race of Africa) cow with calf even though it's not directly related. I'm sure the grazing will be much better though.

I have shown you this little episode just as a reminder how little is needed in terms of orgonite to achieve great effects. It also goes to show that the footwork needs to be done by someone.It's not enough to surround your house and yourself with orgonite even though that's a good thing and definitely a starting point.To break the stranglehold of negativity over your area, all cellphone towers must be gifted.That alone is the most powerful intervention you can make in your area.If your funds are limited, do at least this: place 1(!) TB Dirty Harry at every cellphone mast in your area. Starting from your house, your workplace other places you frequently visit.Then expand that "liberated zone" gradually. It can be up to 500m from the tower and still be effective, although it's nicer to place it within about 100m. But sometimes these towers are just not accessible or there is no suitable hiding place. Orgonite thrives on negative energy. So it's actually not doing very much when placed in a genuinely pristine place. People often don't understand this. Orgonite is a transformer of energy.Put it where it's really bad and you get the most "bang for your buck".