Our first Don Croft style orgone energy converting cloud buster outside South Africa now stands in Matabelelnd in a small farming village about 100 km southeast of Bulawayo in the homestead of Kenny Ngwenya. 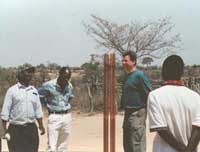 Kenny, his brother and myself with first orgoniseafrica CB in Zim. It was properly inaugurated by a feast that consisted of slaughtering and consuming a goat and drinking lot's of African sorghum beer. 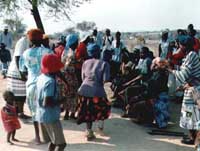 Celebrating the orgoniseafrica cloud buster with song and dance.Dancing and singing went on the whole afternoon under the able guidance of Mama Ncube, a sangoma (psychic healer and herbalist) one of the famous rain queens of Ingelele. 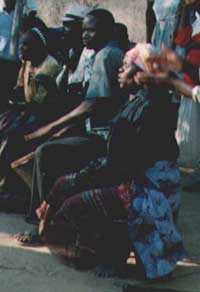 Orgone gifting and the traditional healers

We believe we must work with the traditional healers who have been conducting rainmaking ceremonies for millenia. Ingelele is a part of the famous Matopos hills, which have been seen as a holy area since prehistoric times. They abound with the most beautiful cave paintings from early stone age bushmen that can be dated more than 10.000 years back. 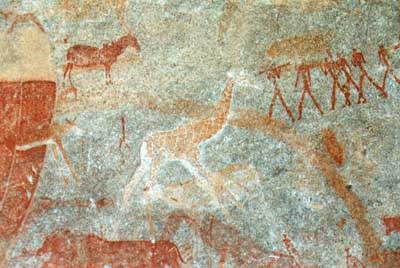 Cave paintings in Namke, Metopes Hills.Every year in August rainmaking ceremonies are conducted by the rain queens which are attended by thousands of people. We were not let near the holy place this time by the custodian sangoma Abraham Ndlovu, but with our new friend Mama Ncube we hope to put a CB right there, where I assume a very strong energy vortex. I guess in Africa one has to always look where the traditional Africans conduct(ed) their ceremonies in order to find the energy spots. The rainmaking cult of the Matopos was a focal point of anticolonial resistance by the Matabele people. Not by coincidence, Cecil Rhodes, the "illuminated conqueror" of much of southern Africa has chosen a fantastically picturesque site for his burial, right in the middle of the Matopos.(after crushing the Matabele and banning them from much of the terrain by making it a National Park of then for-whites-only Rhodesia)His grave was befittingly honoured by a gift of two beautiful red HHGs. 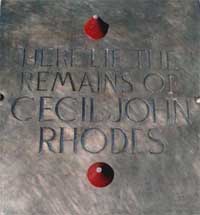 Two orgoniseafrica HHGs on Cecil John Rhodes' grave.We had to hide the orgoniseafrica though. Too many tourists... We were hoping that his his aggressive  and conquering spirit, responsible for so much destruction of African culture and life in the name of the British Empire, could be somewhat mellow and neutralised. There were not many cell phone towers in Bulawayo, so with our limited ammunition of about 12 tb's we took out about 50% I would say. There are none in the countryside yet. Zimbabwe is a wonderful country despite the political tensions. People are very helpful and friendly. Rural people live pretty much in the traditional African way, even if they have "one leg in the city" or in South Africa. The drought is terrible though and pushes large parts of the population to the edge of survival. The so-called "El Nino Phenomenon" (we'd rather call that child El HAARPo) has been on since 1996. Some clouds and a fresh wind showed up after the first orgoniseafrica ZIM-BUSTER was installed but the demonstration effect of some good rain was not granted. Nevertheless, when we left, humidity and cloud cover were building up and when we left Zimbabwe 6 days after installation a hefty rain came down further south far into South Africa. In the meantime it has rained in the area. We'll have to watch it for a while in order to arrive at any decisive conclusions. A year long drought will need more than 1 orgoniseafrica cloud buster to be broken and we hope we'll be able to work on building up a grid over time.