Obstacle course to the Magaben (with orgonite)

Another of the 3 orgonite Sponsorships we originally received for Namibia (that trip had to be postponed) allowed us to deploy a CB in another outlying rural area in South Africa.The Area is called the Magaben and is a so called "tribal area".Our friend Kevin had been frequently visiting this area 12-15 years ago, amongst others with US actor Val Kilmer, but foremost with a man called Adrian Bouchier. Adrian was the first "White Sangoma", after spending weeks and weeks in the Bush, repeatedly for many years, he gained the respect and trust of the traditional African people and was let in on many secrets. He discovered much about ancient settlements and other human artefacts that proved a much earlier occupation by black Bantu People than conveniently assumed by the white settlers who often liked to claim that they arrived almost at the same time as the Bantu. (One of those Apartheid myths)On their trips they had always linked up with a Headman (chief) named Samson, who led and accompanied them into the wilderness of the Magaben (some 80 km North-West from Potgietersrus)Those were the days my friend, I'd thought they'd never end.., but end they did.The obstacle course started with the fact that late departure and heavy infestation with ugly towers (that had to be neutralised) slowed us down so that we reached the target area only after dark at approximately 8pm.Apparently familiar landmarks had been modified to a degree that Kevin couldn't recognise the spot.We drove way past, still scanning the perimeter of the road. When we realised that we had lost it we spoke to some white farmers on the road.They HAD NEVER HEARD OF AN AREA CALLED MAGABEN nor of a Headman called Samson.Things started getting mysterious.We drove back, me already slightly irritated.And then it happened:The strip of grass left and right of the road was used as cattle grazing by the local population and some smaller heards were out that evening.One of the cows suddenly decided to cross the road and PAMMMM! I hit it. It went so fast that I cannot even remember having seen the cow running over, it must have been hidden behind another standing one.Zuuusch, the radiator blows, the lights go off, silence.Middle of nowhere.We step out unharmed but confused. The Pajero is a mess. The cow lies 5m in front of us and is dead. (luckily I don't have to slaughter it) Traffic whizzing by mercilessly. ALL WHITE PEOPLE ZIP BY WITHOUT STOPPING. Quite scary, because we haven't managed to put up any warnings signs yet, and the dark mass of the cow is still lying there. 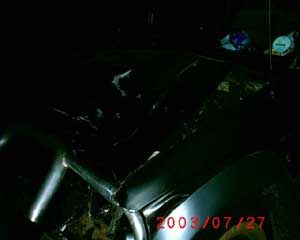 A confused shot of the damaged car right after impact 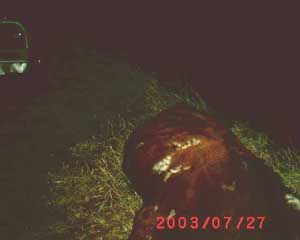 The dead cow, already dragged from streetsome friendly locals finally stop, offering help, consolation and cigarettes. They help us drag the cow from the road and then amazingly I manage to start the engine and hobble the car off the road like an injured animal.We were towed some 150 km to Pietersburg, where we spent the night in the car on the towing service's yard. So shocked must we have been, that we didn't even notice that the windshield was missing. 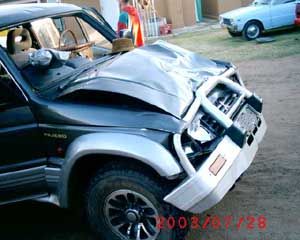 Later at the towing yard.In the morning I thought that someone had pinched it from the yard, while we were sleeping.However undeterred, we got into a rented VW Polo and went back to complete our mission. While busting some towers in Pietersburg, recently renamed "Polokwane" in an attempt to erase white memory as well, we were greeted by a widely visible X, sprayed in the sky. I couldn't help thinking that some bad boy was displaying a strange kind of humour, trying to say something along the line of "gotcha".Well, we'll see who's gonna get whom in the end. 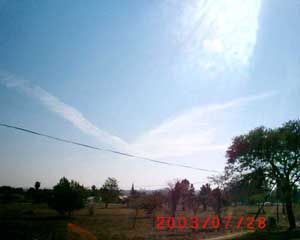 All ideas of a great hike in the wilderness were abandoned, let's just find this Samson and give him the Cloud-buster.We went into the area again and in daylight we finally found the man after an extended search and at a totally different place than Kevin remembered.In his memory the place was still indigenous Africa with traditional huts and a very original African lifestyle.Not so any more. Development had brought wide and straight gravel roads, ugly rectangular cement-block houses and a general aesthetic deterioration. Samson's homestead had been shifted about 30km from where it was, away from the road and into the bush.Finding Samson was the real shock. He is still recognised as the headman, but what had happened to him?He almost lost his eyesight, and worse: he lost his memory!The only white person he remembered was a man from a big mining company who had been negotiating mining rights with them, since Platinum has been found in the Magaben!He didn't know the name Adrian Bouchier or remember Kevin. Totally blanked out.We talked to some younger men who were staying close by and found a very friendly guy who was keen to be the custodian of the CB for the time being. 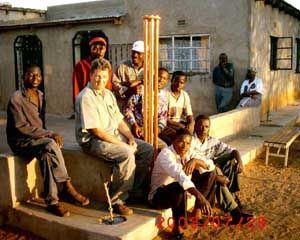 Finally, at least we can leave the CB in the area in good hands.We left with very strange feeling, Kevin probably even more affected then I because a world that he had known and loved had disappeared forever.We were of course wondering what was going on there.The destruction of a once vital and strong man.The total memory loss of the area.The idea of throwing cows in our way to halt our advance. (A healer friend told me I had been "blanketed" for a split second in order not to notice the danger in time, but of course there are more banal explanations, like my anger and frustration for not finding the place etc..)The looming encroachment of the mining company. Traditional Africa and each and every memory of a time different from ours is wiped out at a breath-taking  speed, turning the once proud owners of the land into a destitute mass of slum dwellers, disposable at any whim of the moment as "useless eaters". (Kissing er said that, not me) We went home quite shocked and depressed and I'm still not over this.