We had received a sponsorship for this deployment by a friend who choses to remain unnamed. The Ndebele People, an offspring of the Zulu nation, are widely known for their colourful painting of their houses in geometric patterns.Since a cultural event which was sponsored by the Alliance Francaise had brought us to the Ndebele Village of Mabhoko, we'd been in loose contact with Angelina Ndimande, a paintress per excellence.We decided that Mabhoko would be a great place to put a cloud-buster and of course neutralise all "cell-phone-towers" on the way. Mabhoko is about 90 km North of Pretoria. Amazingly Angelina was not at all surprised when I phoned her about this. She immediately knew who we were and seemed to have no problem accepting what I proposed to her, namely to bring her a device that would hopefully help to bring more rain to her community.We were shocked to see how many towers had proliferated in the approximately 24 months since we last travelled on that route. 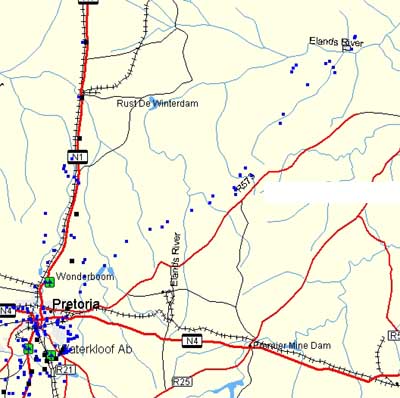 The stream of blue points shows going out of Pretoria north-east shows the suspicious density of towers.

The flag is the new CB (near the words Elands River)The density is absolutely amazing. In "normal rural areas" (spell: white owned farm land) you will still find the old fashioned pattern of a tower every 35 km on the major regional roads.Not so in the "locations" or previous "native homelands".Always in clusters of 3 and with a breathtaking density they have made sure that they guys get their daily dose. I was particularly shocked by the implication this has for our activities as it means that our busting is so far behind the real need and we must recruit more others to help us in this effort. We can just not handle it alone, that's what I realised on this trip.On arrival in Mabhoko we first visited Esther Mahlangu, the world famous Ndebele Painter wo has exhibited the world over and works of her hang in museums in Europe, USA and Japan. We had a chat with her and left after leaving a nice HHG as a gift. 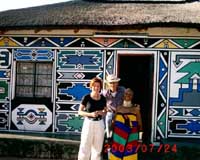 Friederike, Kevin and Esther.We met Angelina at the Ndebele Foundation, a beautyful cultural center which has been built and decorated in the characteristic Ndebele style.At the Foundation there is accomodation for tourists, who can participate in painting classes, another activity is that all the accomplished painters (traditionally only women) teach classes to the village children. Artefacts, paintings on cardboard and paper, as well as various beadwork items and painted objects are available there in a little shop. 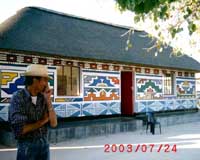 Kevin in front of Ndebele foundation main building.After we were treated to a cup of tea and shown the new facilities at the foundation (last time we were there, it was just under construction) we went to the car and got the CB out.I explained what it was and encouraged Angelina to feel the energy.She immediately adopted it with all her heart and showed a wonderful serene and silent way of joy and gratitude, that I find so often with the more traditional African people. 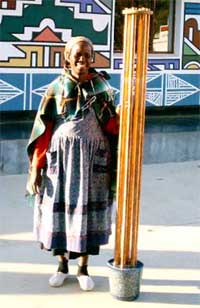 Angelina - The light is shining through her!This is the reason why I prefer to work with these wonderful people: They know intuitively that this stuff works and don't need lengthy explanations because their energy sensitivity is still largely intact, despite all the concerted efforts to the contrary. For those of us white intruders who show some respect and genuine love and interest for their traditional culture and spirituality, they will always open their heart.Angelina told me that her grandfather was a Sangoma (traditional healer) which didn't astonish me the least.There was much more non-verbal understanding than anything else and of the most amazing kind. Nothing of what we said or did seemed to surprise her in the least.Angelina is a very loving, clear and bright person, the likes of her I haven't seen anywhere else.The CB is going to stay at her home and is surely in good hands there.We went home deeply touched and happy: Angelina we love you!