Disabling the Kruger Barrier with orgonite II - the reward

AT FIRST - A DEPRESSIVE OUTLOOK

We had arrived at the Timbavati game park (a private conservation area that is open to the Kruger Park for animal movements) the previous night. (Saturday 20 Dec) The sky looked everything else but promising for rain, rather pale blue, hazy and the area was bone dry. Essentially there had been no rain this season. I got a bit depressed because it seemed as if our 2 day gifting run had led to no visible result here. The setting was beautiful, simple grass huts, primitive but elegantly made, really a place to unwind and relax.

Sleeping hut, done in a simple gum pole and thatch construction but in great taste and love for detail. It was scorching hot, so we were happy to find that the place had a pool! 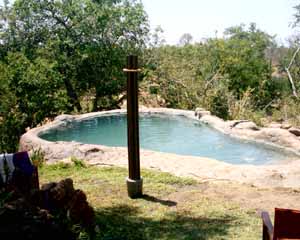 The pool, here already shown with CB (outside chronological order)After having had some breakfast I got the CB out of the car and put the pipes in. Immediately a somewhat cooling breeze started to blow from the east. (Mozambique/Indian ocean side where the moisture is supposed to come from) There was almost no visible cloud in the air in the beginning. I carried the CB to the sitting place near the pool and began aiming it near the few tiny bits of clouds. They looked kind of HAARPy to me, and now something happened that I hadn't seen before:

Wherever I pointed the CB, within a few minutes a rippled skeleton structure appeared, almost as if painted by light. Under longer exposure to the directed orgone beam, this started "fleshing out" to form the typical herringbone patterned HAARP clouds.Over time these would grow into more cumulus like clouds, still initially following the original patterns.

What I theorised to explain what I'd seen:

HAARP seems to simply "microwave" the water content of the higher altitudes, just like a glass of water or a cup of coffee gets nuked in your home microwave oven (if you still have one, you shouldn't as it turns all food into toxic waste). So, in normal operation state, the entire vapour is highly heated and cannot fall out as water droplets, the precondition to forming rain cloud. AT the moment that the CB creates a strong positive orgone field in a region, the working of the microwave radiation is neutralised (future scientists will be able to say more about how this happens) the water vapour cools down, thereby reaching saturation point of 100% relative humidity and becomes visible as white cloud.The most interesting moment was indeed the very short transition from cloudless to the almost ghost-like light pattern that preceded the forming of cloud under the influence of the CB. Maybe my discovery is nothing new to most serious activists here, but I was very excited because I'd never seen it like that and also the whole "mysterious" mechanism of HAARP had never lain before my eyes so clearly and simply understandable. It is indeed a crime against humanity that is perpetrated with full intent and utilising an extremely costly infrastructure. The stuff that Trevor and I saw is of course not intended to be seen by humans, it's a slip-up in their screenplay that we've developed techniques to visualise and unmask their stuff. Unfortunately I was so excited that the thought of fetching the camera from the car didn't occur to me until the most incredible display was already over.

We continued enjoying the wonderful solitude in the almost undisturbed wilderness (albeit dangerously desiccated it was) We were overlooking a dry riverbed with heaps of elephant dung and other animal spoor, but the large animals didn't really show up in he scorching heat. 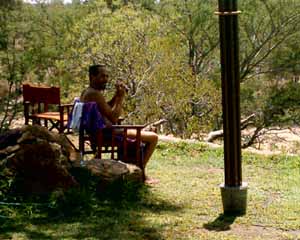 Trevor sitting by the pool and watching some smaller animals having become more confident with dowsing, I checked regularly on the position and inclination of the CB. Always asking if what I had was still the optimal position to achieve rainfall in the shortest possible time. Whenever the pendulum suggested "No", I used it to optimise a new position. 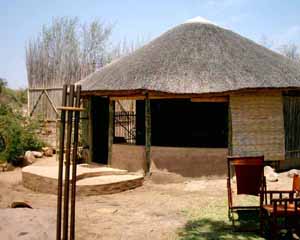 The sky about 1 hour after putting up the orgonite CB: Some water vapour is already visible.I never enjoyed playing with a cb that much and having a whole day of undisturbed observation of the effects. I took it into the pool, (because of the radionics effect - attraction of structural likeness) leaning it against the walls etc... real big fun... We managed to build up a considerable storm front, yet to my initial disappointment most of it went over us into the "hinterland". By 3pm I felt some isolated drops on my skin but not much more happened until about 5.30pm. 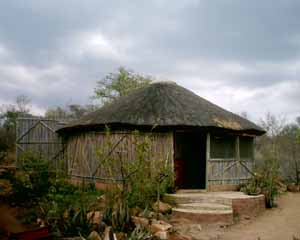 Approximately 2 or 3 pm By then the bulk of cloud had gone over us and we had seen sheets of rain coming down in the distance with some lightning and distant gentle thunder.

AT about 5.50pm we were ready to go, amidst the faint beginning of a slow drizzle. I thought "maybe the real rain will start right when we go and say by-bye to the manager and his wife. 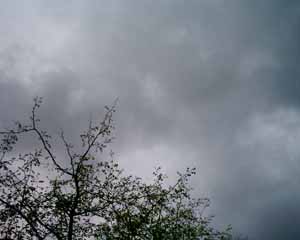 The sky just before we left And so it was to be: We found the manager's wife N. and she hadn't seen any of our stuff yet, so we took her to where we had planted the CB for permanent deployment and started explaining what it does etc. The drizzle intensified while we were at it and then her husband D. joined us, forcing us to repeat some of the explanations. Our whole story was of course greatly supported by the gathering downpour and both of them who had been suffering from the drought so much got very excited. 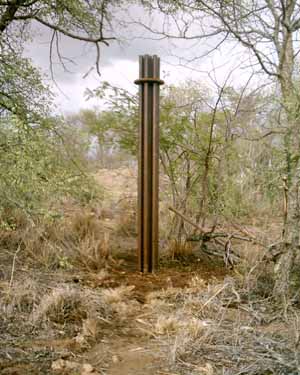 The CB in its final location before the downpour started when we finally left, all gates of heaven were open to flood the earth and we went away in the most spectacular downpour I've seen in a long time. We stopped the car and did a bit of a wild rain dance. As we continued our journey the nightly scenery was again and again illuminated by daylight-bright lightning flashes. This continued for some 2-300 km inwards up to Middleburg.Really an uplifting spectacle. Even Johannesburg got a few patches of rain that night, but the real downpour there was only to come with 1 day delay. A phone call to the manager of the game lodge next morning confirmed 29 mm (11 1/2") of rainfall that night. The rainfall was widespread and covered the whole area that was previously blocked by what we see as the now defunct "Kruger Barrier". I hope we will get the same effect with the seaboard barrier that blocks off rain from the Free State when we attend to this shortly. This new type of strategic busting is certainly the way to go in order to get "more bang for the buck". It's just so much fun to get confirmations like this.

This radar image is from the next morning at 4 am.

It shows the wide distribution of rain cloud in the northern part of SA despite being taken about 6-8 hours after the major downpour.

Went back to the Kruger for a long weekend for mostly recreational reasons. (Family only allowed to toss out thingies for real drive by towers without detours this time...) And hay what a change since last visit. Last time we had been there in late December, normally the height of the rainy season, and it was bone dry, near dead.. Until we busted it, of course (see report above) This time, more than a month earlier in the spring season, it was so green like I've never seen it before.They already had 10% of annual rainfall before we came and another massive downpour with frightening  lightning and thunder almost washed our tents away. Really great conformation for effective change here! We were all very impressed. Georg