Johannesburg 19 April 2007The orgonite work continues of course. I think it has by now become clear that we are aiming at no less than a full orgonite coverage for at least the Southern African subcontinent. The hypothesis behind this project - that we are out to prove to ourselves and those who are willing to consider our observations as evidence - is, that by doing so, we will be able to transform the region into an area resembling paradise on earth as closely as possible.Glimpses of this desired state of bliss have become visible now and again during and in the aftermath of our various orgone gifting expeditions. 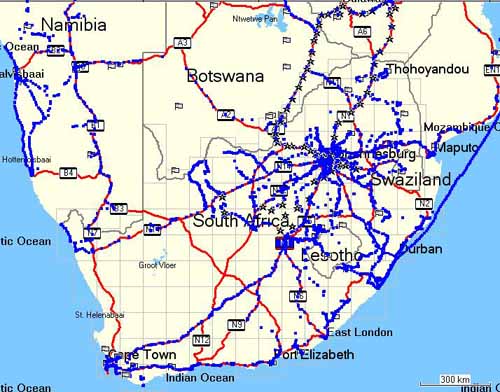 The orgonite gifting effort as per mid December - blue dots indicate orgonite gifts placed by ourselves and the lttle flag symbols show CBs that we either placed ourselves or that we are aware of. 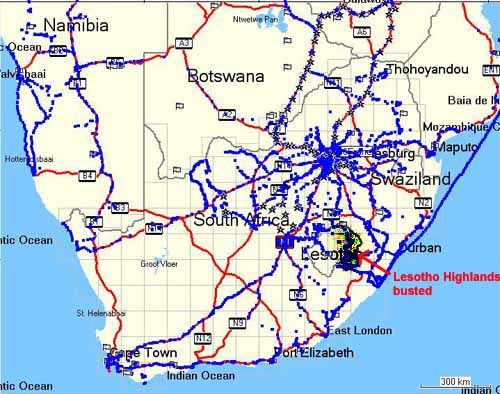 Guerillas in the Mist Over New Year we revisited Matatiele in the southern Foothills of the Drakensberg. It happened to be almost to the day one year after we had gifted the area in early January 2006. (And what a change we saw)We proceeded into Lesotho, to Spend New Year high in the mountains in unspoilt nature where we left a CB and exited through some desolate mountain passes and valleys, leaving a trail of orgonite 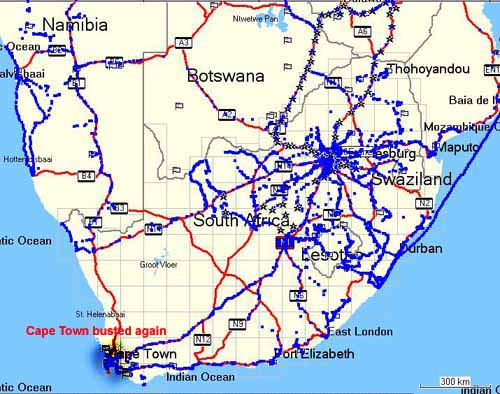 Sylphs over the Mother city A weekend trip to Cape Town was used to liaise with some of the budding orgone activists in Cape Town and do some serious water borne gifting of South Africa's (officially) only nuclear power plant in Koeberg north of Cape Town. We did some more targeted gifting on land and found that our previous visits had left tangible results as the sky looked beautiful and vivid over most parts of the Cape Peninsula 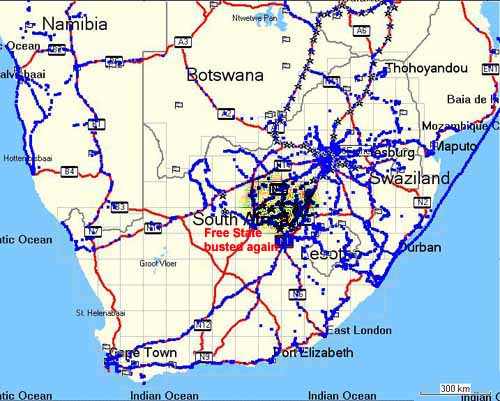 Free State to the rescue In February it became apparent that a lasting drought condition had developed over South Africa, unexpected after the abundant rainfalls of 2006, affecting the main maize producing areas in the Free State province in a dramatic way. We mounted a quick rescue operation to the Free State but were not able to save the crops because the problem was concocted by weather manipulation on a much larger scale, probably located off Madagaskar in the Mozambique channel where very artificial looking Cyclones hi the Mozambique coast and all the rain came down north of the Zambezi in Zambia, Malawi and Mozambique, causing flooding in places, abundance of harvests in other places.. 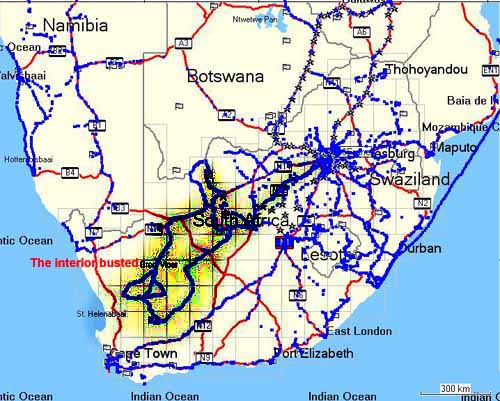 The vast interior South Africa has a large and very thinly populated interior of arid climate, often referred to as a semi-desert.The heart of this dry climate zone is the great Karoo, towards the north becoming the arid grass savannah of the Kalahari that comprosis most of Botswana as well. This huge space - basically the triangle between the Jo'burg Cae Town Road as a South Eastern boundary and the road to Springbok as a northern boundary - had been largely untouched by our previous gifting efforts so far and we used the Easter holiday for a combined family outing and busting expedition...