At the end of January 2008 we embarked on the "Royal Mail Ship St. Helena" in order to cover the stretch from Cape Town up the Atlantic coast to Walvis Bay in Namibia with orgone-ite gifts.
This is part of our orgone-ite necklace project, placing an uninterrupted string of orgone-ite gifts along the southern African coastline.
More than 4000 km of coastline have already been covered with orgone-ite gifts placed at intervals ranging from 1-10km.
The St. Helena is a combined passenger and cargo ship that regularly serves the outlying British Possession St. Helena, the Island were not only Napoleon but also the Zulu King Cetswayo were held as political prisoners. 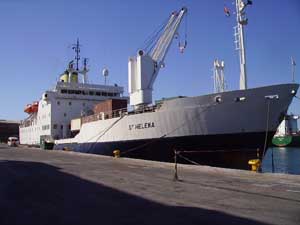 We took some 180 TBs (as much as you can carry on an airplane without paying for overweight) and other water gifts with us in order to be able to put out at least one gift per every 10kms.
The ship had a problem with its radar and our departure was therefore delayed by one night.
We should later discover that that was a blessing in disguise because it saved us one night watch.
We were only going one way and that meant that in order to cover the whole distance we had to stay up for two nights.

Of course we did that intermittently, Friederike taking the first turn until 2am while I slept for 4 hours from 10 and then I took over from 2 am into sunrise, which was fun. 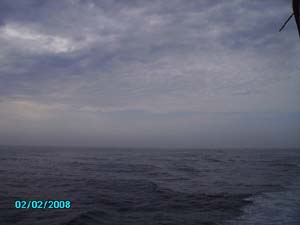 The crowd on board was "very British" and very 65+, so we stayed mostly to ourselves, basically spending 90% of the time in the deckchair reading. Of course we made sure that we were close to the railing and could drop our stuff totally inconspicuously. 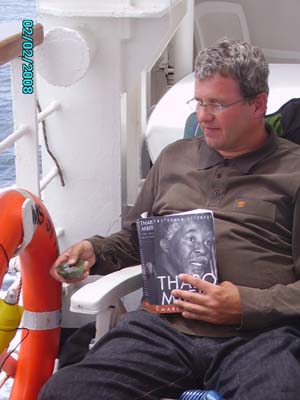 Only when we took alternating turns to stay out in the drizzle at night while every normal tourist was sleeping, did we arouse some curiosity with the crew and one female officer became very inquisitive at 4 in the morning the second night when she found me in the drizzle on my deckchair after having observed Friederike in the same position until 2.
I think she was the security officer.
I told her I found the cabin air a bit stuffy and I'm sure she thought I must have some marital dispute with Friederike, to spend the time out there.
So, luckily the inbred British respect for other people's privacy prevailed over her professional curiosity here, but I'm sure another night on deck would have provoked serious scrutiny.
So, I guess the cruise model only works well if you go back the same way and can fill in the gaps on the way back as we did on our Bazaruto cruise in 2006.
Or you have to accept those gaps and just be happy to throw out orgone-ite at "normal" times. 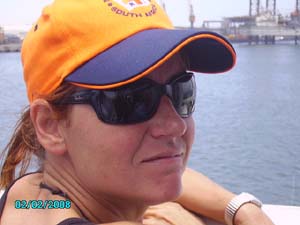 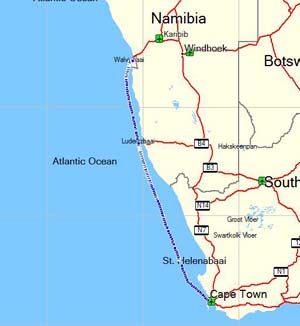 If you remember our first orgone-ite gifting tour to Namibia, "Operation desert rain" you know how puzzled we were about the coastal desert that is basically covering all of Namibia's coast line. Even though unusual rainfalls have been recorded all over Namibia since our tour in September 04 including some flash floods in desert area, the desert is still a desert. I wonder if our sea gifting effort will be able to change this anomaly on a more permanent basis.
Despite all the learned explanations from people schooled in conventional meteorology, it doesn't go into my head why all these clouds are hanging over the sea, just offshore and yet almost no precipitation reaches the coastal desert.
We spent 2 nights at our friends' in Walvis Bay, reconnecting after 3 years where we only had occasional email and phone contact.
They subscribe to a bunch of Namibian newspapers and I was amazed to find a lot more in-depth reporting on the weather situation in Southern Africa there than in the South African Newspapers.
While weather data for South Africa are readily available on the internet, that is not so for the neighbouring countries. Here we only get sporadic news reports about extreme weather situations like droughts or flooding, often with a very manipulative slant.
All the articles I found in Namibia confirmed abundant rainfalls in the wider Zambesi catchment area. Most of the articles were based on reports of NGOs (Non-Governmental Aid Organisations) working in those areas who have a natural interest to "cry wolf", meaning their funding depends on finding ever new miseries to report to the donating public.
So it is no wonder that they are reporting these rainfalls as something negative.
There has been flooding of some low lying areas, but these are the floodplains and wetlands that used to always be seasonally flooded.
One more insightful article quoted a district governor from Zambia saying that people stayed in these areas deliberately because they had become "addicted" to foreign donor money and relief goods. So staying in these areas where their ancestors would only graze their cattle in the dry season was actually making good business sense for these people. 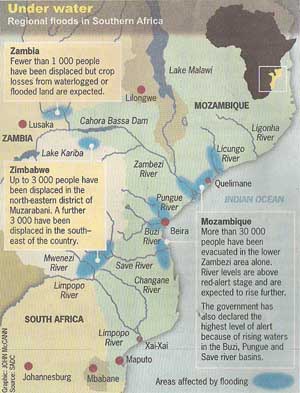 I noticed earlier, that the "Mail and Guardian" and "The Star" were using the same picture of a woman and her child at the somewhat flooded river banks of the Zambezi (nothing abnormal about that) to underpin their weak story of catastrophic flooding in Zimbabwe and Zambia.
The general trend of the last decades has been one of increasing desiccation and desert forming in Southern Africa, before we started reversing that.
So my impression is that these articles are a desperate attempt of subliminal "propaganda against rain", if you know what I mean.
This is actually the environmental healing that has to happen and it's happening on a large scale.
In South Africa itself rains have also been abundant and farmers are expecting a bumper harvest.
As we are entering the autumn season now, it is astonishing to see how green everything still is.
Normally the surroundings of Johannesburg look like a dry savannah at this time of the year but not this time,  instead of yellow-ochre and the red of the soil, you see all different hues of juicy green. And this is being reported from virtually all of Southen Africa, including Botswana, Namibia and of course Mozambique, Zimbabwe and Zambia.
My feeling is that the Zambezi tour in Easter 2007 facilitated this massive and profound turnaround after a short spell of relative drought from January to March 2007.
If you have followed my reports, you will remember that that short drought after a few years of ever increasing rainfalls motivated us to take up water gifting on a massive scale and I think the results confirm this decision.