In January we went down to the Western Cape to continue our incomplete orgonite gifting work there. 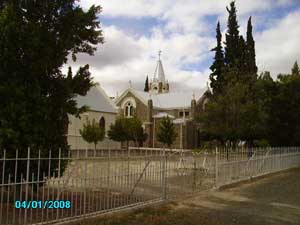 First overnight stop Laingsburg We drove straight through to Laingsburg, a sleepy little town along that major Jo'burg - Cape Town highway in order to spend the night there.Next morning we went on the scenic route down to Witbank where we had left the boat for repairs, mostly on gravel and sand. It was amazing to see how green the Karoo (an arid semi desert) was all the way down. We see this as a result of our tour in November, in conjunction of course with the work done in the Cape and the Karoo previously. It all adds up. 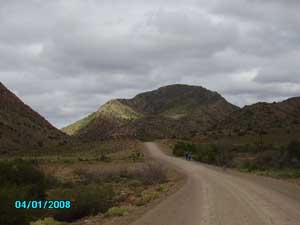 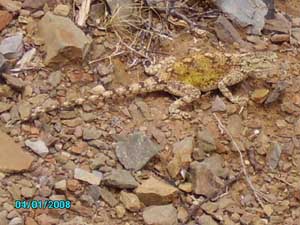 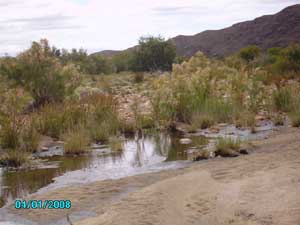 Water puddles everywhere in the Karoo and a lush wet feeling wherever we came. 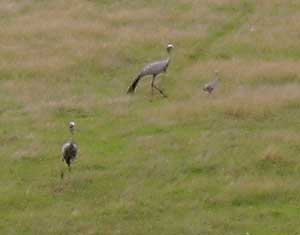 Blue cranes on the way to Witsand 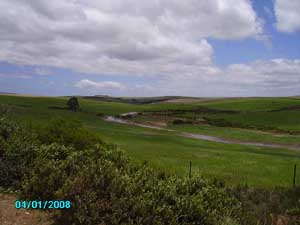 Green hills behind the dunes of Witsand The stretch of rolling dunes just behind the coast line has also gotten unusual rain. This rivulet was not there last time I drove through here 2 months earlier.In fact it looked more like this: 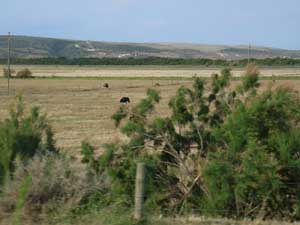 Landscape behind the dune belt in November '07After we received the boat back, we went straight to Struisbaai, close to Cape Agulhas.We stayed one night on the windy campground there and then lounched the boat to round Cape Agulhas and go to Gansbaai, about 60km from there.I had a hellish respect from Cape Agulhas because the 2 currents meet there, the Agulhas current from the Indian Ocean and the Benguela current from the Atlantic. Those can under certain stormy conditions lead to confused wave patterns with waves 10m high or more, all in the presence of dangerous rocks and cliffs. So I'd been a bit apprehensive and a lot of people had warned me not to do this in my little boat.But we were lucky and the wind was quite low and the sea calm.But as soon as we were about 5 km from our launch site and not yet around Cape agulhas, I heard a popping sound and then an unconfortable vibration came from the Motor. Oh, my god, the same problem again!As you may remember we had just had a problem with the gearbox of that motor and for that reason left the boat in Witsand with the boat mechanic there.On the bumpy dirt roads from Witsand to Struisbaai we had lost the strut, that was holding the motor in a tilted position for transport and the motor must have clocked down on the transom with violent force. So we were later to find out that a rod that transmits the gear changes through the vertical shafts had broken at the connection between motorhead and lower shaft.All these things don't seem to be made for my kind of expeditions, it seems.However the vibration seemed to be stable and the motor was running well in forward, so we decided to continue. 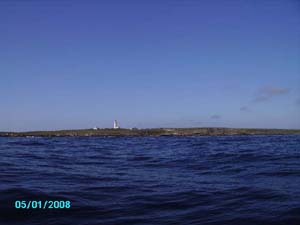 We rounded it: Cape Agulhas lighthouse from the sea! 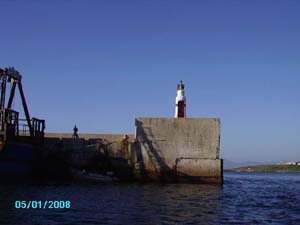 Gansbaai harbor entrance Next day, under somewhat more windy conditions, I was going to cross the bay from Gansbaai to Hermanus. The stretch near Gansbaai is also known as "Shark Alley". Cage diving to see the great white shark is the favourite tourist attraction here and many surfers and fisherman have blamed an increasing number of violent shark attacks on these activities, where bait is brought out near the cages with human divers inside to attract the sharks into visible range. The critics of this practice think that it teaches the Sharks to associate humans with food. The swell was high but manageable and the stretch was not too far. 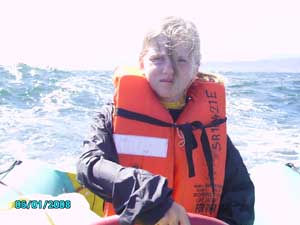 Bella at the helm over shark alley 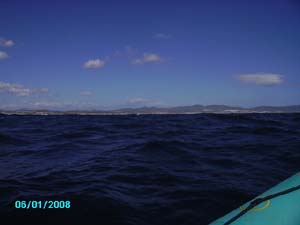 We took one day off in Hermanus, which I used to rush back to Witsand to see if the Mechanic could help me with the renewed engine problem. A drive of 250 km back and 250 forth. As we found out it was not due to any lack of workmanship on his side, I was very pleased, when he agreed to lend me a very old but functioning 30hp Yamaha and we exchanged the motors leaving mine for repair again. Next day I was ready to leave for Gordon's Bay with Kika, into False bay and around Cape Hangklip. Again the swell was quite high and whenever we had the wind blowing against us, it got very cold, wet and uncomfortable. It took us about 4 hours to get to Gordon's Bay. But Kika showed bravery as usual. 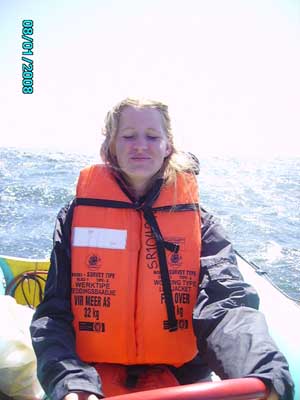 Whoops - so high! Kika braving the swell Next Day, I was going to take Bella from Gordon's Bay to Simonstown.The sea was calm when we started but wind freshened up considerably and for the final stretch we had to face the oncoming waves with one after the other slapping us right into the face. I had aimed for the Simons Town Yacht Club, only to learn that they had a policy not to allow non-members to launch or retrieve their boats any more. They told us to go 7 km further up near the light house where there was a public launch site. (That would have taken us another hour against the wind and waves) I couldn't imagine any more of this bone chilling advance against the sea and so pleaded with the lady in charge (I told her she'd condemn us to certain death by freezing if she sent us out there again) until she finally showed some softness of heart and wrote me a 100ZAR invoice for "emergency retrieval". Phew! 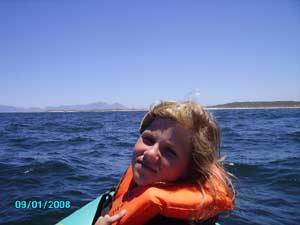 It started so nicely...After that we took one day off to accommodate ourselves at our new campsite. It was very windy anyways. What was left now was the rounding of the Cape of Good Hope and somehow closing the small gap from Hout Bay to Llandudno where the red NSRI boat had forced us to abort in November.We were staying in Kommetje on the western Sea Board, south of Hout Bay. So on the 11th Friederike and I set out to cross Hout Bay and go to Llandudno and Back. 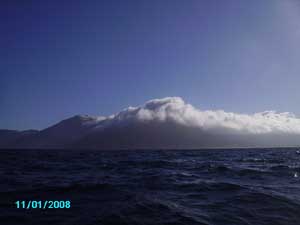 Morning mist over Mountains near Hout Bay We left early and had the boat in the water by 7.30. It was quite chilly most of the time and the sea was choppy. 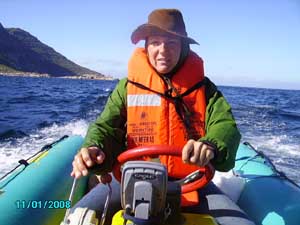 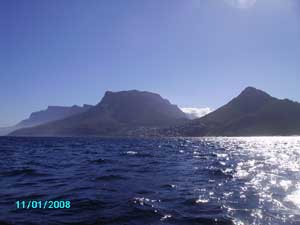 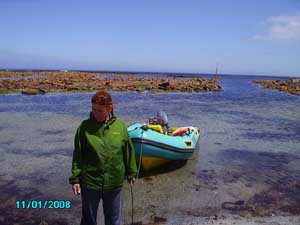 Finished: Friederike holding the boat, while I get the trailer 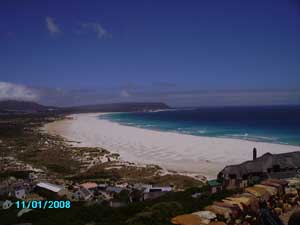 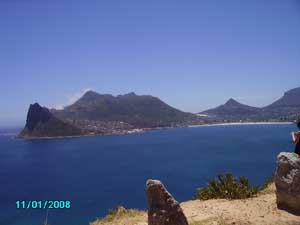 Hout Bay from the road 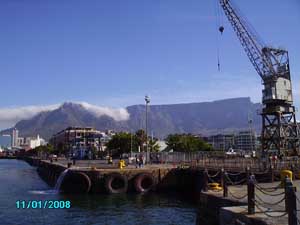 The famous table cloth over Table Mountain moving in The final leg of this trip was to be the rounding of the Cape of Good Hope. Kika and I set out on the 12th of January. 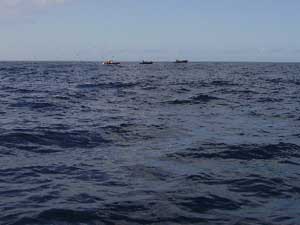 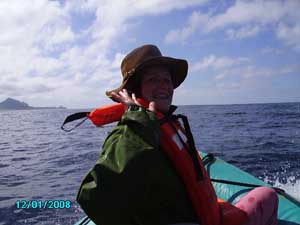 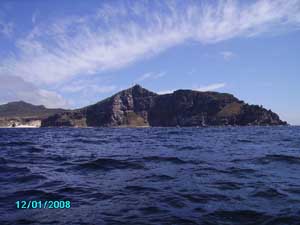 Something that initially looked like a chemtrail becoming more sylph-like 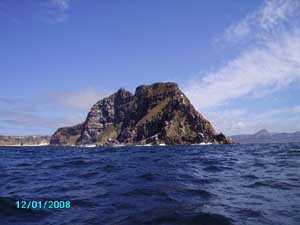 This is the famous rock...

After rounding the Cape we did an extra detour to properly bust the Simonstown Naval base where all the expensive new German Warships that South Africa has recently bought are stationed. And who knows what they're transmitting under water. So, Simonstown Naval Base got peacefully mined with 30 or 40 pieces of orgonite. 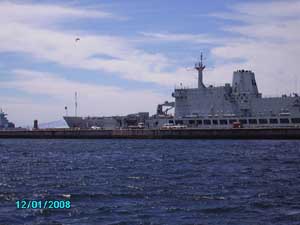 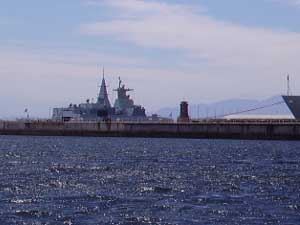 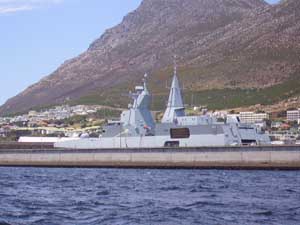 These radar deflecting stealth shapes can look quite futuristic 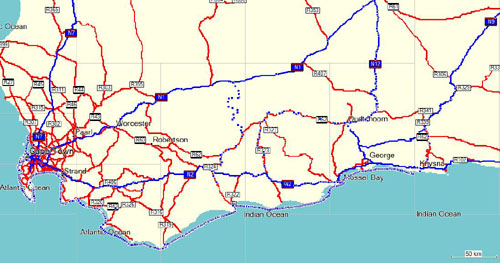 So, this difficult part is now done: Minimum 1 TB or water buster per km over a stretch of 800 km