Worse before getting better 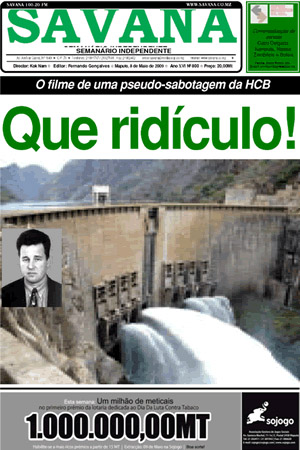 "Ridiculous - like in a bad movie" If you can read Portuguese check out Savana here. My hat is off in reverence to these courageous and uninhibited journalists. Here is a broad but incomplete selection of further news clippings in reaction to our story: BBC allafrica.com Legalbrief highbeam.com Cape Times architectafrica.com You can get a picture of the spectrum of reactions if you just type the words "sabotage cahora bassa" or the Portuguese version "sabotagem cahora bassa" in your favourite search engine.

Dr. Nhantumbo had been the focus of all our hopes and we initially loved him to bits. He is a good looking, intelligent, well articulated and lively African man.

We felt that he had true sympathy with our case and there was a bond of friendship developing. After we had been transferred to Tete, he visited us more often and, as stated before, he fed us well.

But then things started taking a strange direction: In the first days he gave us the impression that it could only be a matter of days until the prosecution would drop the nonsensical allegation and set us free. Of course his daddy already having been a judge i tete he's a well connected man in the legal scene of Tete province. His sister is prosecutor in Songo where we were first arrested and held for more than 3 weeks.

Things were dragging on and on and we were now told that "things had to cool off a bit" first, because Mozambique had to do a face saving operation, couldn't be seen to cave in to foreign pressure or public opinion too easily. The more we were surprised when the formal accusation was handed to us by a clerk of the court.

2. The crime of Sabotage (punishable with 8-16 years  imprisonment)

3. The crime of smuggling (the orgonite)

It turned out that the tests conducted in Maputo, while confirming that the orgonite was essentially what we said it was, still came to hair-raising conclusions about the alleged potential toxicity.

Ridiculous when one considers that most of the boats on Cahora Bassa are made of very similar resin in the form of fibreglass and together represent 100s of tons of such resin.Polyester resin bound fibreglass is actually used for drinking water tanks. It was clear that the sparse and scant laboratory results had been garnished with politically inspired drivel that was presented as part of the report.

The laboratory tests that were allegedly conducted in South Africa were not presented as part of the evidence.

While we were pondering these accusations and trying to gather evidence to counter them point by point, we would have expected our dear Dr. Nhantumbo to engage in a flurry of activities, visiting us at least daily (we had 5 days to come up with a counter motion)

But Nhantumbo did not come once in this critical period.

Our tension was rising to frantic state. On a sunday in that period a great surprise happened:

We were visited by my friend Fungai who had come to bring additional evidence and liaise with Nhantumbo.

Through him I learnt that Nhantumbo, instead of working on our case, had been hectically haggling with Friederike over a fee demand of 35,000 US Dollar.

Wow! We knew nothing about that and had been cut off from communication by Nhantumbos absence, because he was able to receive messages and forward them to us and also to fax our letters to Friederike who would distribute them to the others.

We also learnt from Fungai that there was nothing in writing that could be called a "counter motion" on Nhantumbo's desk.

In fact he told us that Nhantumbo was barely in his office but rather running around to do all kinds of other things. Certainly we never saw a draft or a copy of any written submission that Nhantumbo may have made.

Was it all a racket?

Was Nhantumbo playing both sides?

Was he the mediator for a corrupt settlement with the equally corrupt represantatives of state power?

On the day of the deadline I suddenly received a very wellcome visit from Mr. von Chamier, an official of the German consulate in Mozambique.

He came with Nhantumbo who pretended all was in order between us. Since we had the advantage of speaking in German, and von Chamier was fully briefed by Friederike, we could talk openly about our concerns about the non-action regarding the deadline and a mounting suspicion of our dear lawyer being up to something fishy.

He must have sensed this or maybe he understands more German than he wanted to let us know.

Suddenly Nhantumbo was in a great hurry to submit the counter motion in time (whatever it may have been that he submitted there, because we have never seen it) We confronted him on the story after we had the information and told him to do business WITH US, not behind our backs. Intuitively I told him we would go for 20,000 since we were all grown ups and capable to enter agreements.

I didn't have near that money but we were able to pay some 8000 then. The Rest was promised as a success premium after our release.

My vehicle and boat were pledged as security. Now suddenly it all went very quickly and a few days later we were free! Of course we were happy but the situation was still awkward.

Our release was accompanied by the TV Cameras of Mozambican national TV again and a lot of Newspapers wanted interviews. We wanted nothing of it. For a few days we were personal guests of Nhantumbo in his apartment (I had expected a lavish house from a lawyer who deems himself worth 150 U$ an hour. That's a lot of money in Mozambique. 20K also is a lot of money)

My final verdict on the man is still out. I'm not judgemental.

We felt his genuine hospitality and desire to communicate with us.

In fact I think he spoke from his heart when he told us he's going to miss us as he has nobody in Tete to whom he could talk to in a broader view of things.

We met many of his friends and had barbecues with him at the construction site of his new house. We played with his lovely daughter and had dinner at home with him and his wife. Maybe a corrupt deal was the only way for us to end that episode and we should not bicker about the money of course. A deal is a deal. Nhantumbo really liked the orgonite (I'm sure he will eventually get hold of our confiscated stash and put it o good use in Mozambique) His prosecutor sister is wearing one of our zappers while she was also the one who proudly invented the phrasing "Alteration of goods destined for public consumption" that were used in the legalisation of our continued incarceration.

I was growing increasingly depressed as I was feeling that I was ending up paying the bill alone. Something I was not ready to accept at that point. I also did not know if I was ever going to see my Landrover and boat again. I also felt very strongly that suddenly every one of our group was overwhelmed by their own concerns and I was going to sit with that problem pretty much alone. (Except for Tino who pledged his part and had also contributed to other activities that were undertaken outside to facilitate our speedier release) As it became clear that nobody was going to come up with the rest of the 20K in time, we left per plane, leaving the landy and the boat in the custody of an acquaintance of Nhantumbo in the yard of a mechanic workshop, behind closed gates. I was later to retrieve the items (a test of courage for me to go back to Mozambique for that purpose, but no problem) by flying in with Fungai. (After full payment was done. As a little aside, this friend of Nhantumbo's charged me 3000 Meticais (then 100$) per day for parking the car. I had clearly understood 300. That's more expensive parking than in Manhattan where real estate is probably 100x as expensive.

TIA (This is Africa)

So, the whole experience was more confusing in the end than anything else. Was this orchestrated from higher up in order to discourage us from further such expeditions deeper into Africa? I guess it was at some level. I would imagine that someone in the dirty hierarchy of the secret services got us to be watched and got the whole "sabotage" and "terrorism" dimension thrown in.

For the rest they only had to let Mozambique’s corrupt and inefficient system take its course in order to effect enough "punishment without crime". Having no documet that really says charges against us were dropped, we have no legal recourse, no chance to sue for compensation or whatever.

The fact that the ending of it was without clear legal conclusion leaves us wondering as to what our legal status is now in Mozambique. Both I and Tino have visited Mozambique after this and nothing bad happened. So maybe we should assume it's all over. Sort of...

I guess it's a tacit understanding that we're not going to talk about it anymore and they not either.

I guess what it taught us again is that in Africa you're traditionally expected to ask the chief for permission if you want to do anything on the land over which he is lord.

This is still difficult for us to accept as we're used to the relative impersonality of relations between a government and it's underlings in the European tradition.

One would think, what we're doing is not really government business, but in a police state like Mozambique, everything is.

It took a while for me to comprehend this, but in Mozambique people are really afraid of "the authorities" like I haven't encountered it in any other African country. Already in 2005 when we gave a Cloud Buster to the traditional healer Alexander in Vilanculos, his greatest concern and fear was what the "authorities" would say about it.

The villagers near Cahora Bassa that Prophet and Carlos were showing the orgonite to, reacted the same way: "What would the authorities say to this?"

Since nobody in a country like Mozambique wants to take responsibility for a decision about something they don't know, it would mean you need to talk to the top, the president, the king over land and people.

Maybe that's what we need to do if we want to do more work in Mozambique.