For a long time I had in mind that gifting the human sacrifice camps in Poland with orgonite would be a worthwhile trip. They  hang so heavily in the conscience of every German and cast a large dark shadow over Europe. The project became more concrete when we were made aware that some of the major camps were arranged in a satanic pentagram, ostensibly by the Jesuitic masterminds of this incredible and gruesome slaughter.

Theories are theories of course, but orgonite gifted these places had to be in any case. 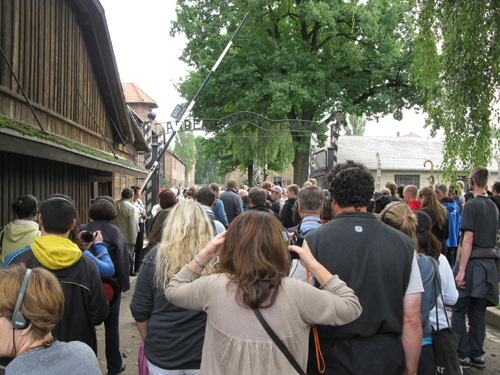 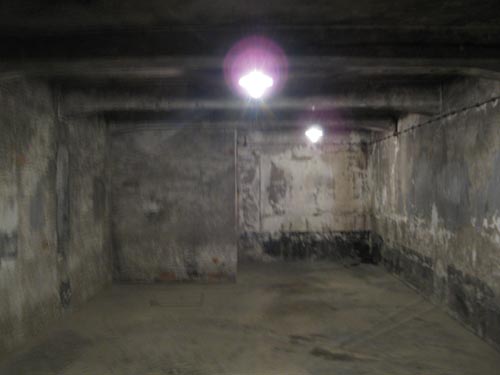 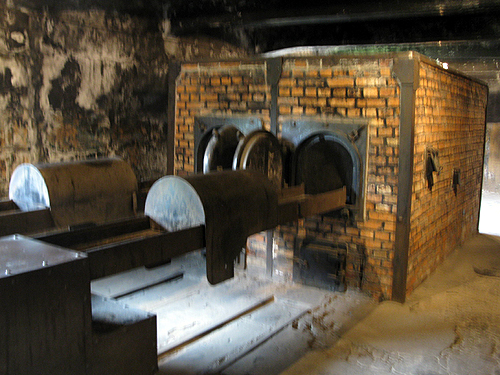 The ovens "next door"...(Auschwitz I) 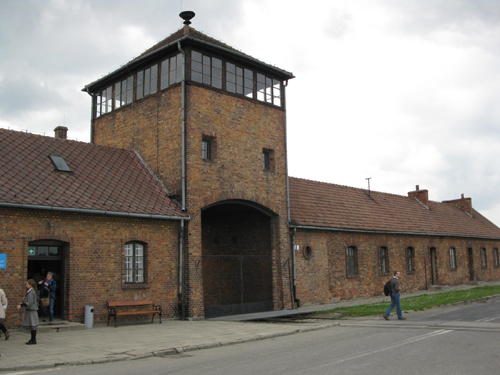 Now this is the real deal (Auschwitz Birkenau) 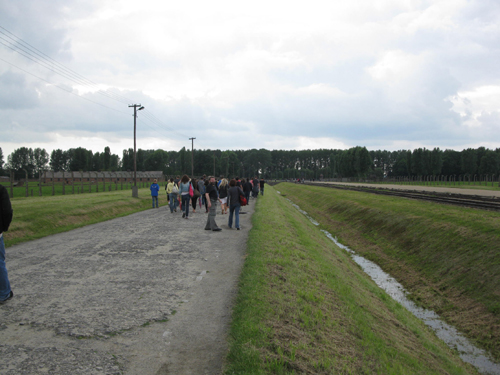 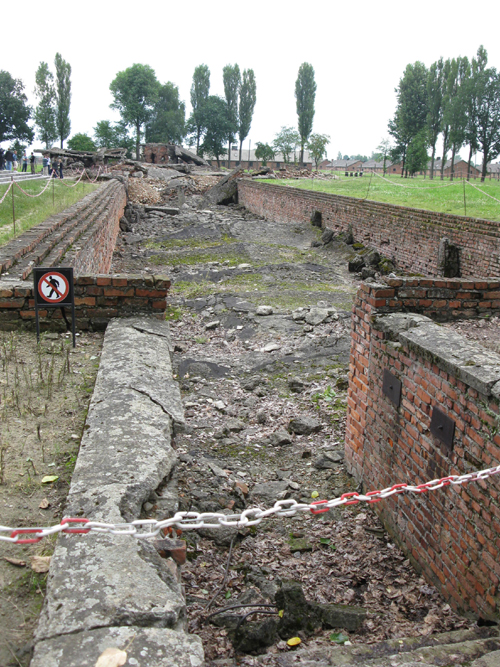 Ruins of (alleged) gas chambers and crematoria in symmetrical positioning 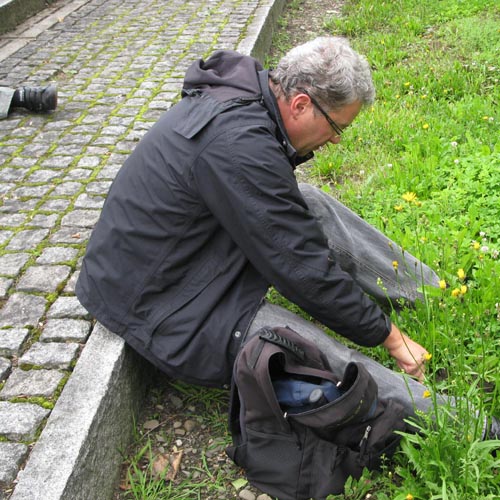 Some commemorative digging. 2 dodecs, 2 earth pipes and about 50 TBs were gifted at Auschwitz I and Auschwitz Birkenau and a train ramp outside Birkenau where victims also arrived.

The Ghetto was called "Litzmannstadt" under German occupation. Apart from piecemeal elimination of the original Jewish population, mostly by deportation to one of the other known extermination camps, especially Chelmo, "Litzmannstadt" had an Extermination Camp for children. Hundreds of thousands of children were killed in this camp. Nothing is left. Socialist housing blocks have been built instead of the old Ghetto buildings. A part of it has been turned into a park. There is a very large Jewish cemetery, but it looks deserted.The people seem to be oblivious to the past of this cursed place. 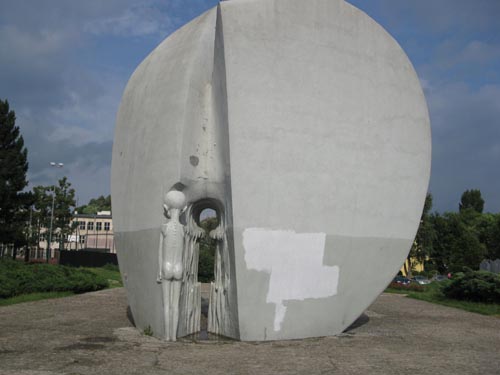 Monument to the murdered children 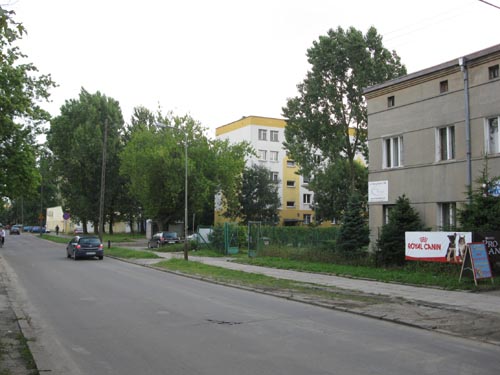 Socialist housing blocks oblivious to the past 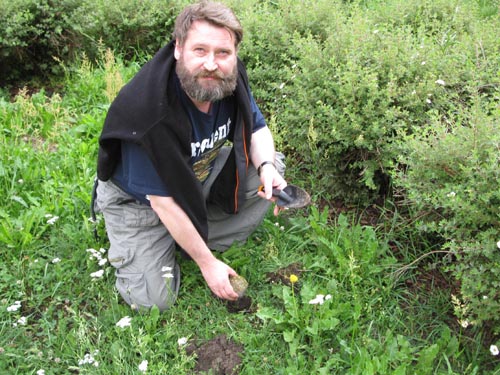 A dodec and about 40 TBs were placed here. Treblinka The Treblinka extermination camp is about 150km northeast from Warsaw. It operated until 1943 when it was destroyed in an uprising of inmates. Hundreds of thousands of people were killed here. Only some 400 escaped of whom only 40 survived the war. 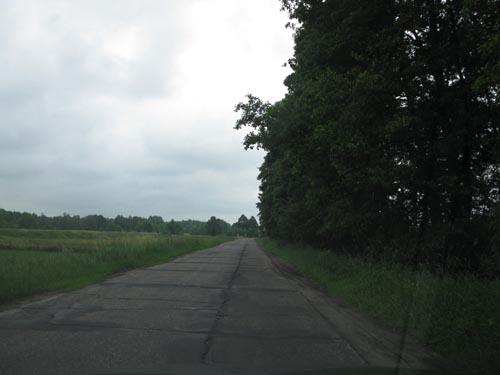 This road leads from the small village of Treblinka to the camp hidden in the forest.

It is still in its original state 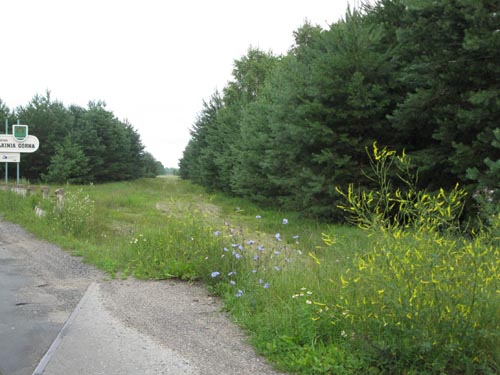 Railway track to Treblinka. The rails were obviously removed. 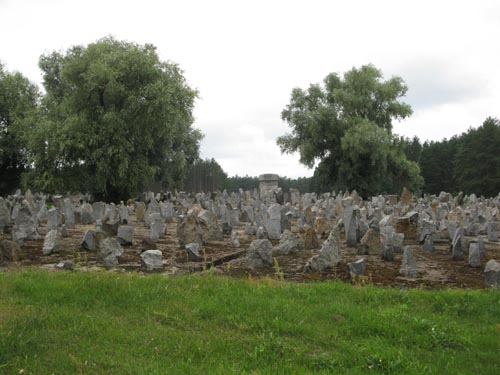 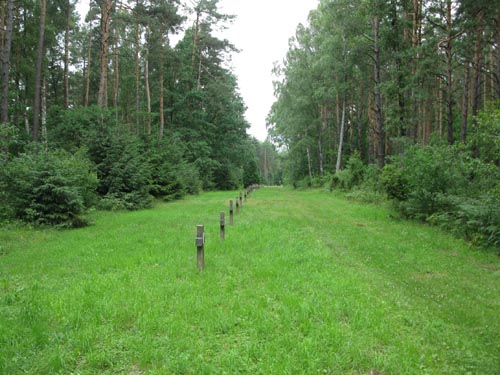 We actually liked the way the camp was commemorated in the form of symbolic sculpture. The camp was completly removed by the SS after an uprising of inmates destroyed it in part. We placed a Dodec near where the Gas Chambers are said to have been. About 50 TBs were placed over the rather expansive terrain. 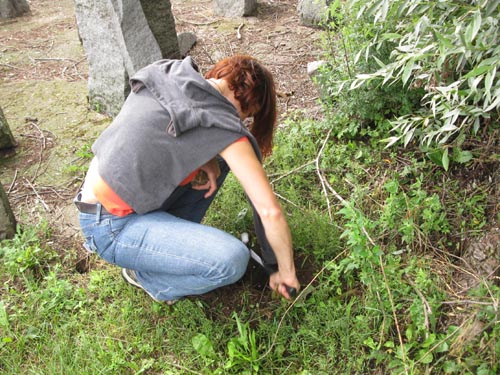 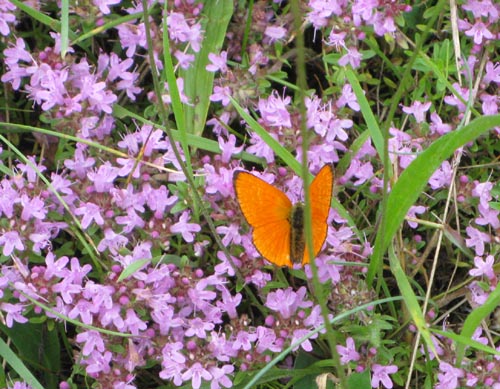 We noticed a multitude of butterflies, much more than I have ever seen.

I could not help thinking of them as the trapped souls of those that had been murdered here, now finally free to go... I had a similar experience in 2003 in Uganda when Doc Batiibwe, Don and I gifted the Bujagali Falls, another place of mass human sacrifice, and thousands of Bats emerged in bright daylight. 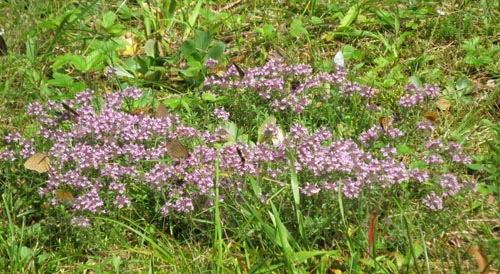 About 20 butterfles in this picture

Centre of the pentagram 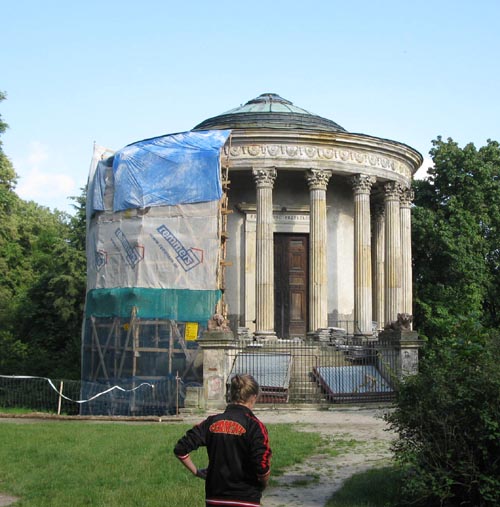 Located in the landscaped park of Palais Czartorski, seat of one of the most influential magnate families of Poland this temple of Sybil is said to be the occult centre point of the evil pentagram. Some inaccessible vaults in the cellar beneath give rise to some sinister speculations... Here is a link to explain the significance of Cybele in the occult satanic Vatican.Sobibor This was No. 4 on the pentagram. Another one of the lesser known camps, however it was the place of mass sacrifice of several hundred thousand people. Located near the Eastern Border of Poland in a very remote area, the same railway station that carried the transports of victims is still there. The traffic signs pointing to the place are saying "Sobibor Stacja". (Sobibor Station) A Polish family lives in the green wooden house that once served as "SS-Kommandatur".  The camp was also razed in 1943, also after an uprising of inmates. It has been "re-enacted" in a symbolic way as well although somehow in a less appropriate way. It seems (I'm not claiming to be an expert in KZ history) that the Nazis wanted to close these camps anyways and the inmates knew they would not be left to bear witness to the atrocities. Those inmates that were able to organise rebellion were the ones that were kept to process the killing of the new arrivals. All extermination camps essentially used inmates to do the dirty work of killing (making people undress and march to the gas chamber, assuring them that all was going to be fine) and processing the dead for loot. 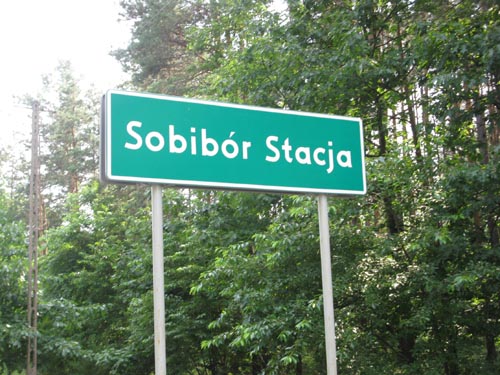 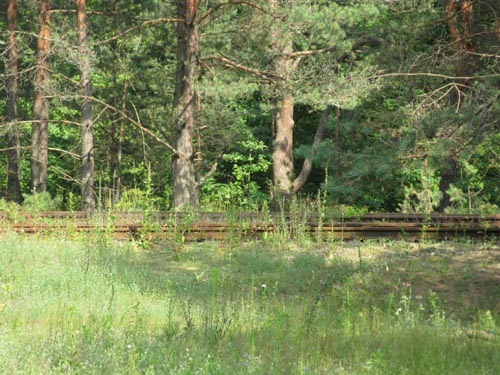 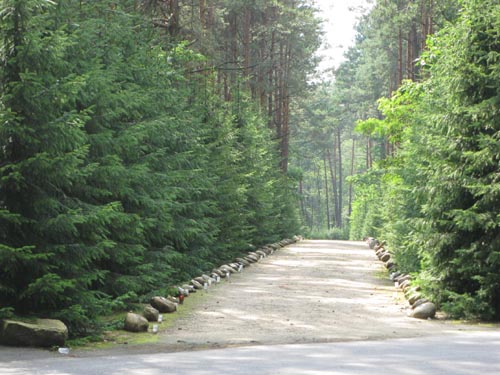 Symbolic recreation of the road leading to the gas chambers, sarcastically called "Himmelsstrasse" (heaven's road) by the SS 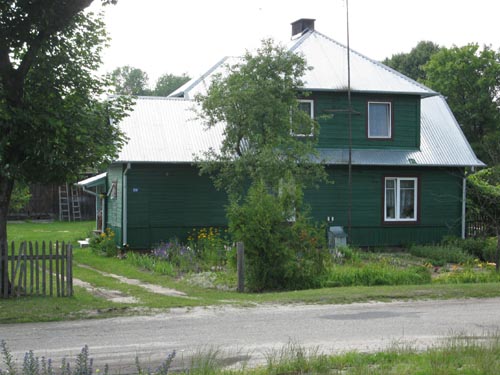 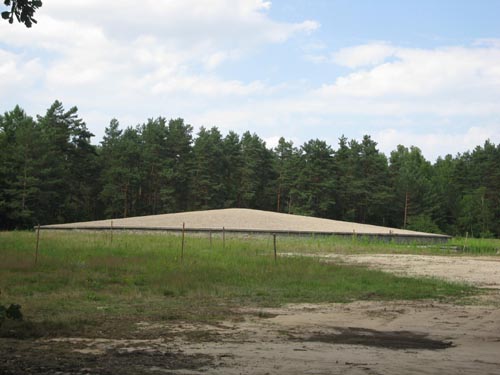 This flat cone of sand is to mark the mass graves 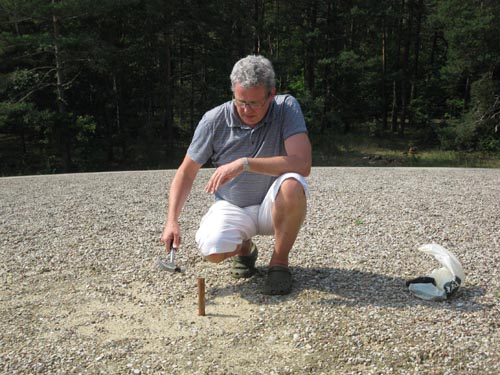 Smacked an earth pipe right in the centre of it 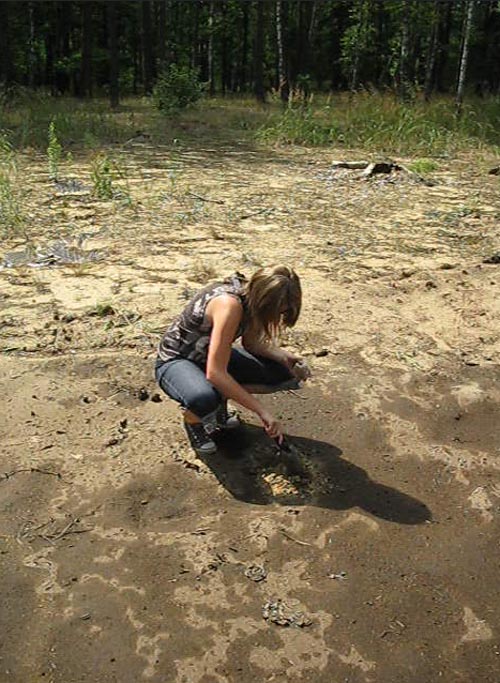 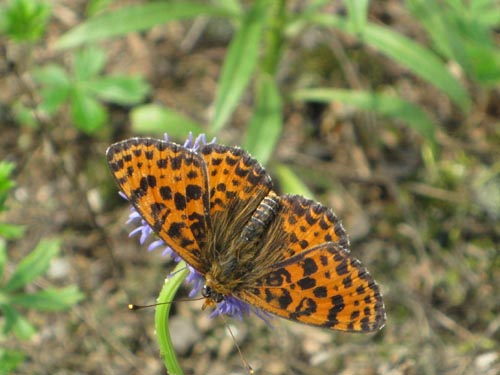 A similar abundance of butterflies here as well... In total we put an earth pipe, a dodec and some 40-50 TBs here.

No. 5 would have been the Janowska Camp near L'viv in Ukraine For some banal practical reasons we did not go there (the rental car could not be taken outside the EU) this time, but gifted 2 spots on the connecting lines instead. This should neutralise it as far as the pentagram is concerned. Piotr will go and do Janowska some time later by train. 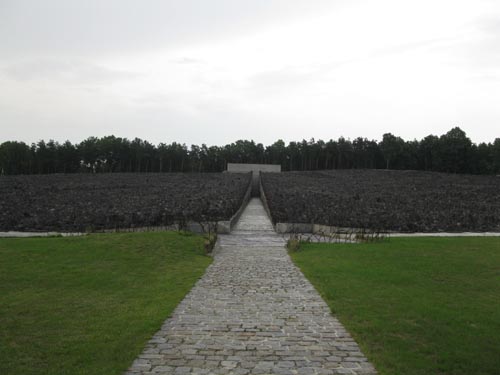 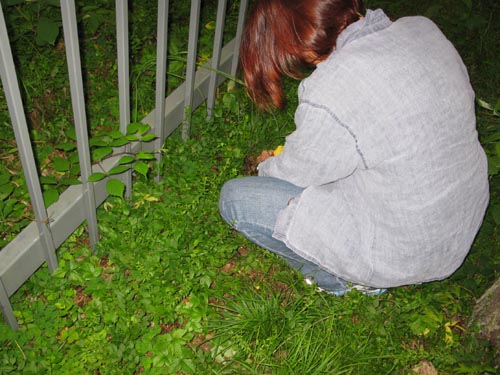 Friederike burying Dodec on the line 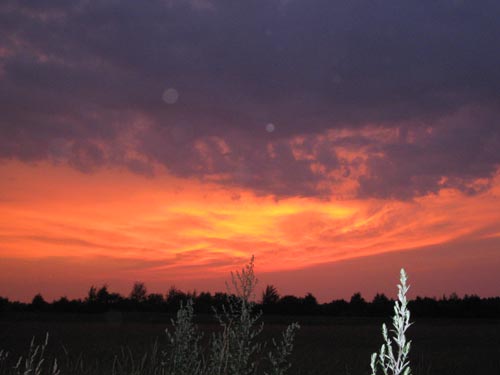 After we had done Belzec, this beautiful luminescent sunset seemed to indicate that we had finally done the job 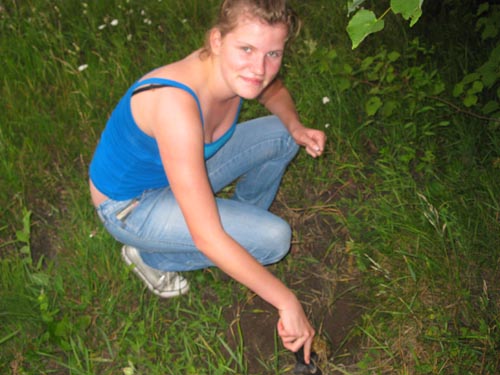 Bella digging on the spot This last one was just placed on the line connecting Lodz and Janowska. (Wonders of GPS navigation allowed to determine the spot quite precisely)

I am definitely taking all theories about the so called "Holocaust" with a pinch of salt. I am totally aware of the orthodox textbook history (we have grown up with it and I read a lot more than average about it in many details) and also of most of the revisionist doubts cast on the latter.

Even if the revisionists were completely right and these camps had been "only" mass detention and transit centres with "admittedly a few killings" here and there but no deliberate mass genocide, they would still need gifting and be it for the negative symbolic role they have played in upholding the post WWII oppressive order in Europe. I mean, we gift even "normal" prisons, so certainly these deserve some attention.

The quoted article adds a few new aspects to this debate that "ring true" and it reconciles some of the orthodox views with some of the undeniable objections of the revisionists.

The Vatican involvement in protecting and extracting high SS perpetrators is very well known and has never been denied by official history. But please make up your own mind by reading the article on the One Evil Website. Of course we are not a political debating club and so my interest in European history remains a private one, because I can't really contribute on a professional level. We do healing work here and we noted long ago that orgonite helps dissolve negativity on all levels including thought forms.

So for our healing project it strictly doesn't really matter what really happened at those camps. Even when taken just as a symbol, they have created horror and opression and have helped to justify the continued occupation of Germany without peace treaty more than 65 Years after the end of hostilities in WWII as well as the establishment of the state of Israel at the expense of the original inhabitants, the Palestinian Arabs. That alone would be reason enough to gift them. Wanna know my personal gut feeling? I think where there's smoke there's always fire and I don't think that those KZ or KL were just hunky dory places. It just doesn't feel right that way. Of course a tru-er history of WWII is yet to be written and a free and open debate of all positions without the ridiculous threat of being imprisoned for "Holocaust denial" when coming to unorthodox conclusions in such open debate and uninhibited research.

The gifting of these places may be a contribution towards opening this mental space as well.