Orgonite and The African Dream 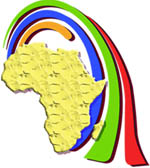 End of February I had the chance to spend a few days in Cairo with our friend Mohamed Kamal.

Mohamed is an extraordinary person with a great vision for Africa.

After a very succesful sports carreer that saw him participating in the Olympics with the Egyptian handball team and after being Egyptian pole vaulting champion for some time he started several successful businesses that saw him presiding over anagricultural industrial "empire" worth at least 300 million US dollars.

But his aspirations were always to uplift the youth and generally the people of Africa.

In the 1980s he built a city in the desert called "Amal City" (Hope city) complete with agriculture, irrigation and businesses to accomodate 7000 young families whom he offered a new productive existence. In the meantime he had become so popular and prosperous that he attracted the envy of the ruling clique around the recently deposed former president Mubarak.

When he politely refused their corrupt offer to become member of the "inner circle" exploiting the country, life started becoming difficult for Mohamed. (In fact they wanted 60 million US dollar from him as an entry ticked into the corrupt world of mega-parasitism)

He ended up with all his assets stolen from him by the same cabal and spending 7 years in prison without ever being even charged.

Mohamed had meanwhile begun to start large development programmes in cooperation with the Namibian and Mozambican government that were of course falling apart after very promising starts when he dissappeared in Mubarak's dungeon without anyone getting notice where he was.

Eventually his son, Ahmed found out where he was and started fighting a legal battle for Mohameds release and restitution of his reputation and dignity.

He has now been free for over 2 years and won an undisputed supreme court order that clears him of any wrongdoing whatsoever and declares his incarceration unlawful. He also won title to his properties back in the highest commercial court of Egypt.

While in prison, Mohamed worked out a comprehensive plan for the development of Africa as a prosperous and independently viable continent. Wow!

I shall not say more about this. If you are interested to learn more, please visit the website of Mohamed's African Dream here.

Suffice it to say that it is an honour to know a person of such vision and fortitude and to join his team in helping him to make this dream come true.

Egypt after the revolution

Egypt has gone through a popular uprising, much symbolised by the huge demonstrations on Cairo's central Tahrir Square. These mass demonstrations, initially often brutally supressed by the Egyptian military (with quite a few casualties resulting in even bigger public anger)  at least led to the demise and subsequent incarceration  of former president Mubarak and some of his cronies.

It is difficult to say because events like this are always the favourite playground of all secret services, but a lot of the Egyptians including Mohemed feel like a genuine victory has been won. Of course, a lot of the old state power structure is still in place and presently Egypt is actually ruled by the military who promise to hand over power in a step by step election process. 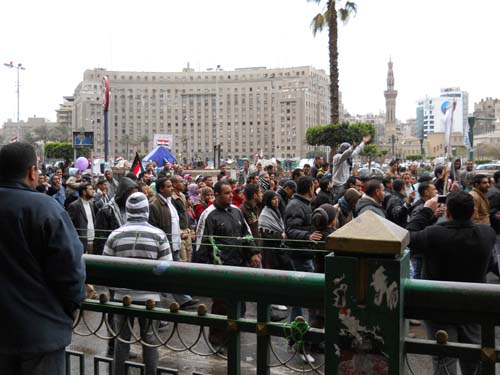 Demonstrations are still ongoing, but nowhere near the scale of the actual revolution.

Some Gifting (hope to be back for more soon) 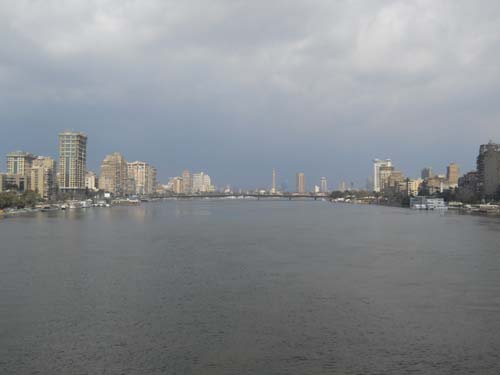 The Nile with a potentially impressive waterfront (imagine that plopping sound)

As usual when travelling by air the amount of orgonite one can take along is limited. I had brought a few nice pyramids as giufts for Mohamed who is also happy to sistribute them to friends and "adversaries" in equal measure. Apart from that I had brought about 40-50 TBs and 5 earth pipes, mainly hoping to be able to gift the famous Gizeh Pyramids this time. But I couldn't resist the urge of plopping 2 TBs from one of the bridges crossing the Nile. Of course this is only a beginning. We had gifted the so called "Source of the Nile" which is the outflow of Lake Victoria in Uganda in 2003. The real source is of course in the Ruwenzori Mountains in Rwanda, another of the may desecrated holy spots in Africa that need to be gifted. 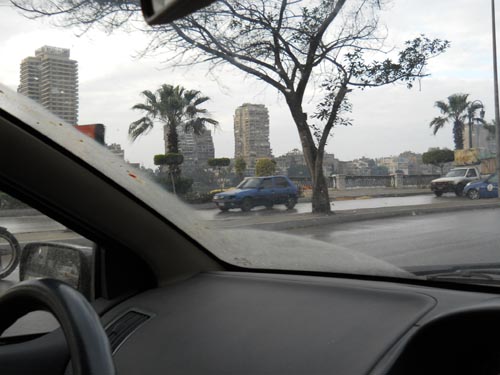 Cairo is a gigantic mega city of some 20 million inhabitants. Traffic is busy, relentless and chaotic and cellphone towers abound. I'm sure one would need some 6-8000 TBs to have a profound effect on the city and of course another obvious project would be gifting the Nile by boat from The Delta to at least Assuan. (Aswan) Seeing the magnitute of the task and our limitation of time, I did not even try to any "ordinary" tower gifting in Cairo. It would have been like a rain drop on a hot plate. 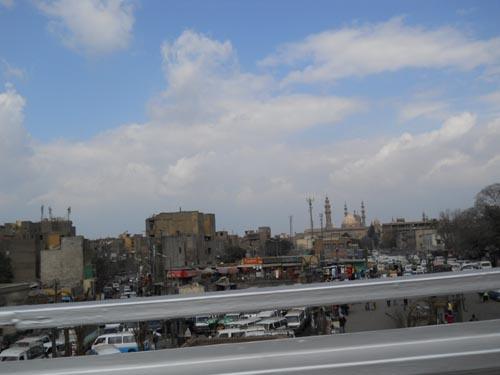 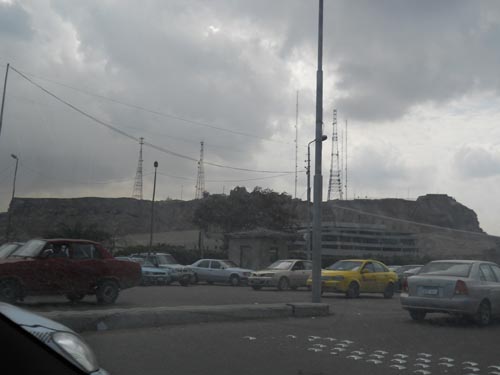 More towers Lots of targets for thorough gifting, but unfortunately I had to leave them. 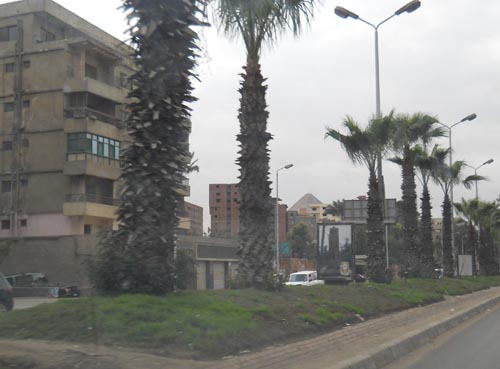 Approaching the pyramids in Gizeh 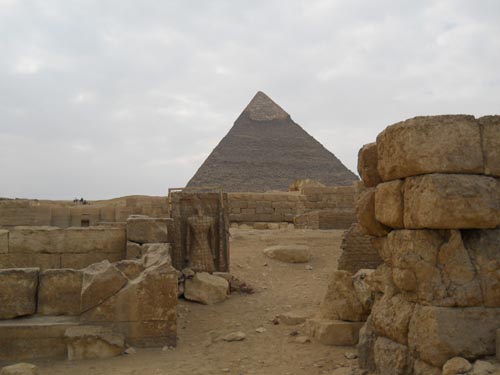 Luckily we found enough clefts and crevices in the ancient walls..

The pyramids presented themselves in a kind of desolate atmosphere. The weather was winterly cold at some + 5 degree Celsius, with a strange mixture of drizzle rain and desert dust making life unpleasant. Egypt is suffering from much reduced tourism as potential visitors are afraid of potential unrest or violence (we found that completely unfounded because in a 20 million city even when 1 million demonstrate on one square, 95% is still business as usual.) 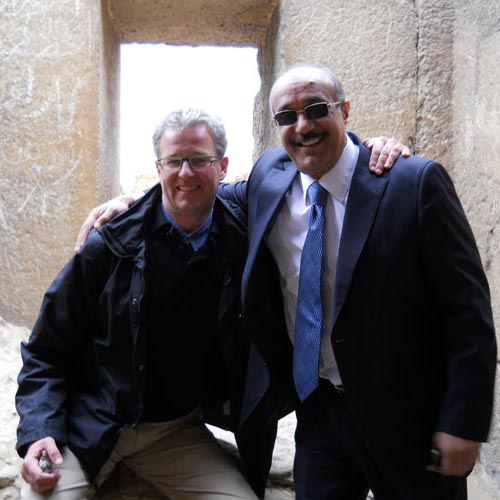 Our friend Mohamed K and I. 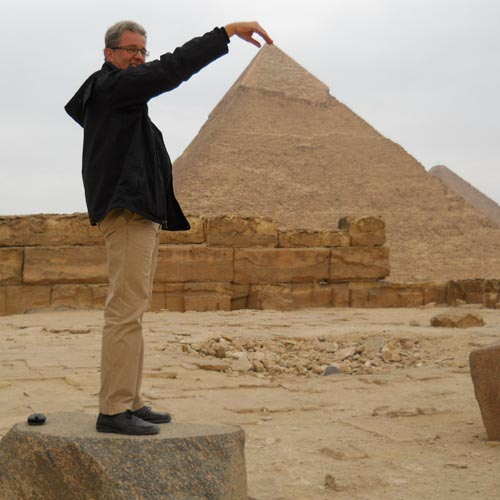 As a result of the slow trade, the myriads of camel drivers, self proclaimed pyramid expert guides and plain chancers converged on us like mosquitos in a swamp. There was not one minute of peace or contemplation. Someone would immediately start a chat-up line à la "you look like Omar Sharif" or whatever. Difficult to stay polite sometimes and also difficult to find a quiet spot to place some orgonite in this potentially so powerful but somewhat desecrated spot. 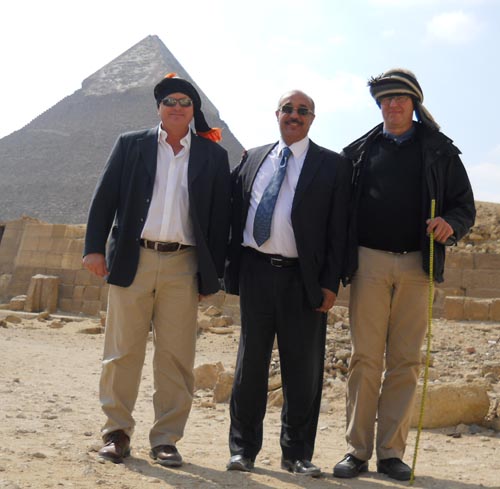 We did however manage to get our moments of solitude and placed about 30 TBs and 5 Earth pipes in the general area. 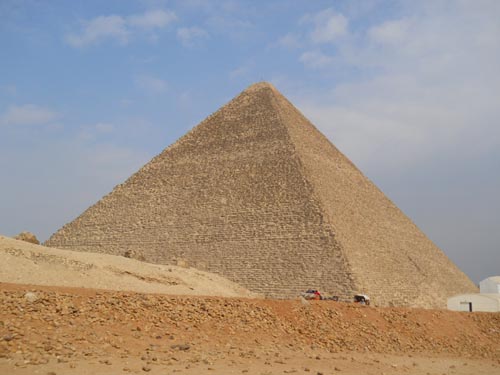 These pyramids are indeed powerful despite their half ruined state

The funny weather cleared up and a blue hole emerged over the pyramids, at least temporarily nothing dramatic however.

With all the ancient secrets and energetic anomalies known to be associated with the pyramids I do however expect profound change to happen as a result of our gifting. How it will manifest? I have no idea inshAllah... 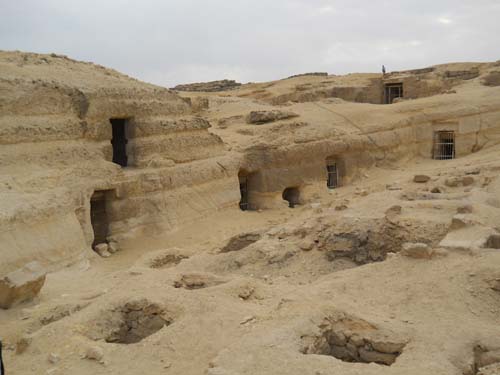 Pharaos' graves. No pharaos where ever buried in the pyramids, as most of you probably know by now. 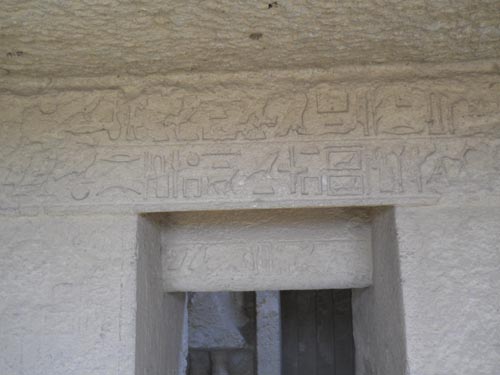 If only I could read hieroglyphics 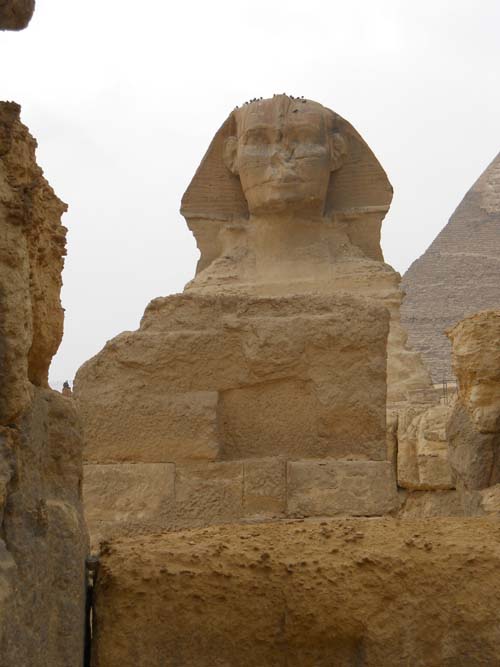 As our cooperation with Mohamed widens and deepens, I'm sure we'll be able to return and do a lot more. Watch this space for updates.

The implementation of the African Dream will entail the use of orgonite in agriculture and for protection against harmful radiation including proper scientific evaluation of its effects. Generally the African Dream will create an enabling environment for the "New Scientific Paradigm" that we can all see emerging but which has been blocked from being commercially developed in most parts of the world. We live in interesting times.