The purpose of this trip was to connect the orgone gifting work previously done in South Africa and Namibia by doing some massive laying down of orgonite tower busters accross Botswana.Our friend Andy has already put up about 14 Orgonite Cloudbusters in Botswana but not many towerbusters.The population centres such as Gaborone, Francistown, Selebi Pikwe etc., concentrated in the eastern side of Botswana, had already been covered quite well in previous trips.This (and the gifting in neighbouring countries) has already lead to greatly increased rainfalls in normally very arid Botswana. (Botswana is 90% Kalahari "desert", more a dry savannah than a desert, but still very dry) Now we are hoping to create a conduit on which the energy can freely move across the Southern African subcontinent.On the list forintensive orgone gifting were also some very mysterious and alluring places: 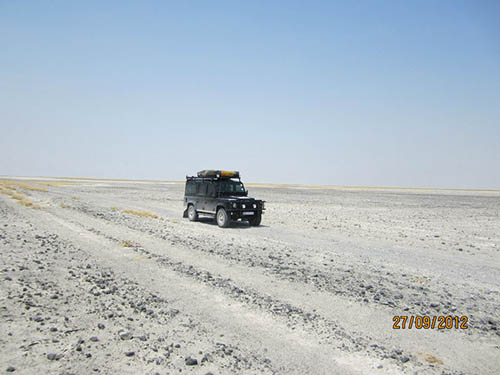 Driving through the Makgadigadi pans 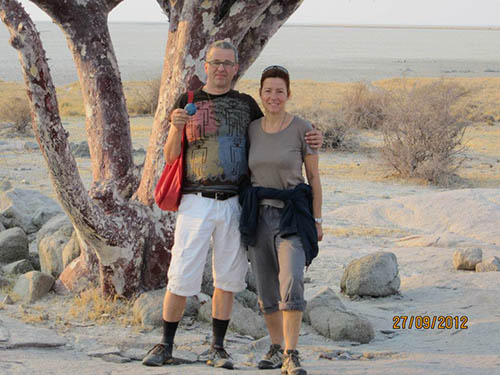 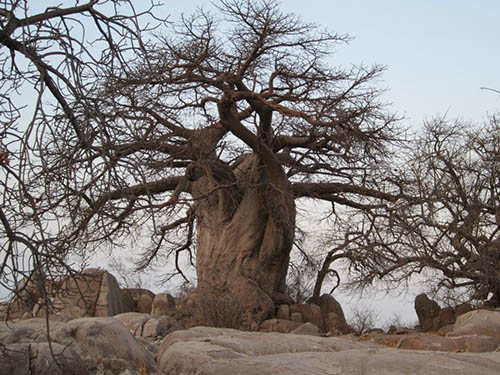 Giant Baobab on Lekhubu Island - You bet it was gifted! (The whole island was) 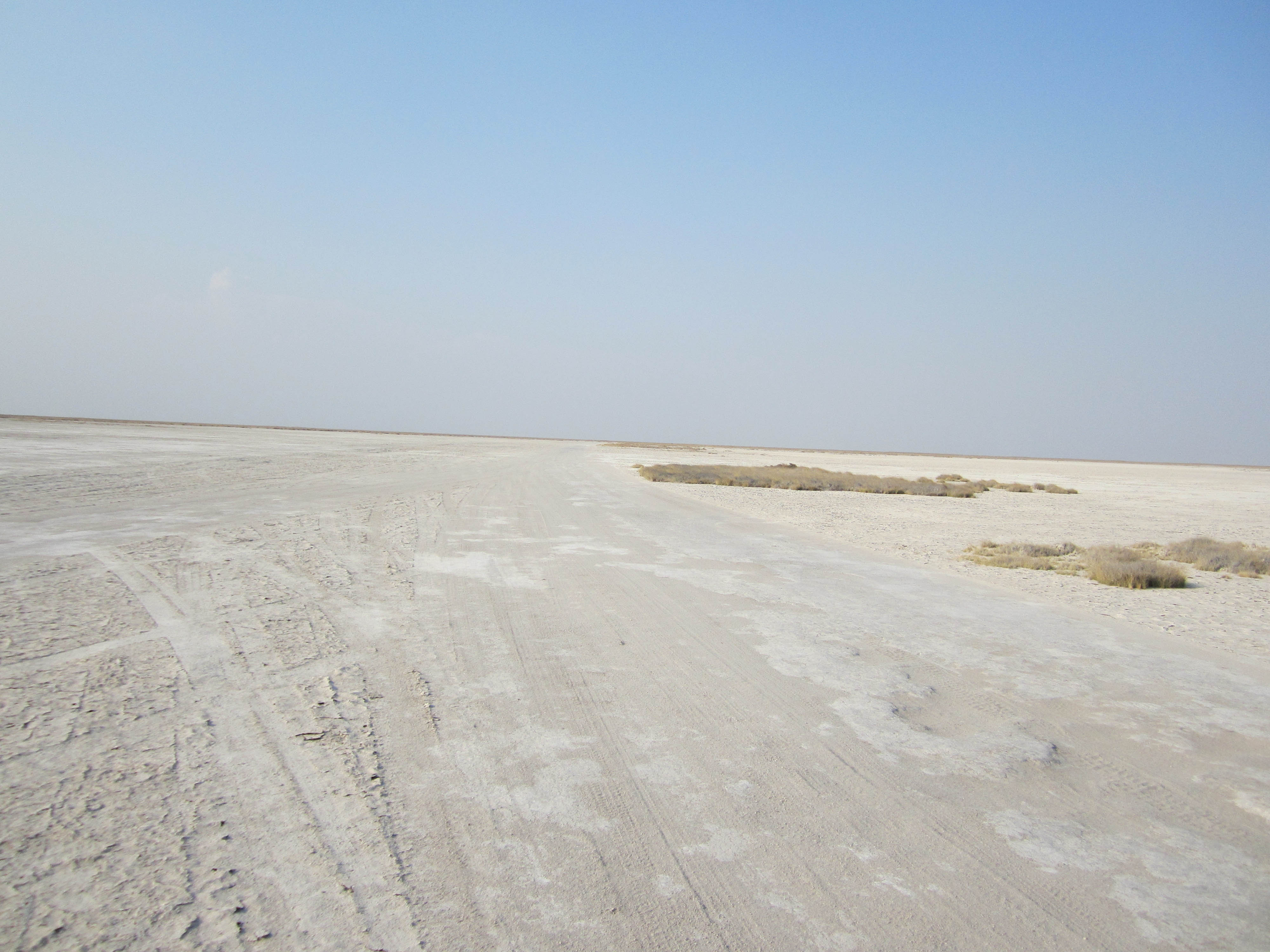 Salt forever...How pleasant - after this world of salt and sand - was the verdant environment of the Okavango Delta. 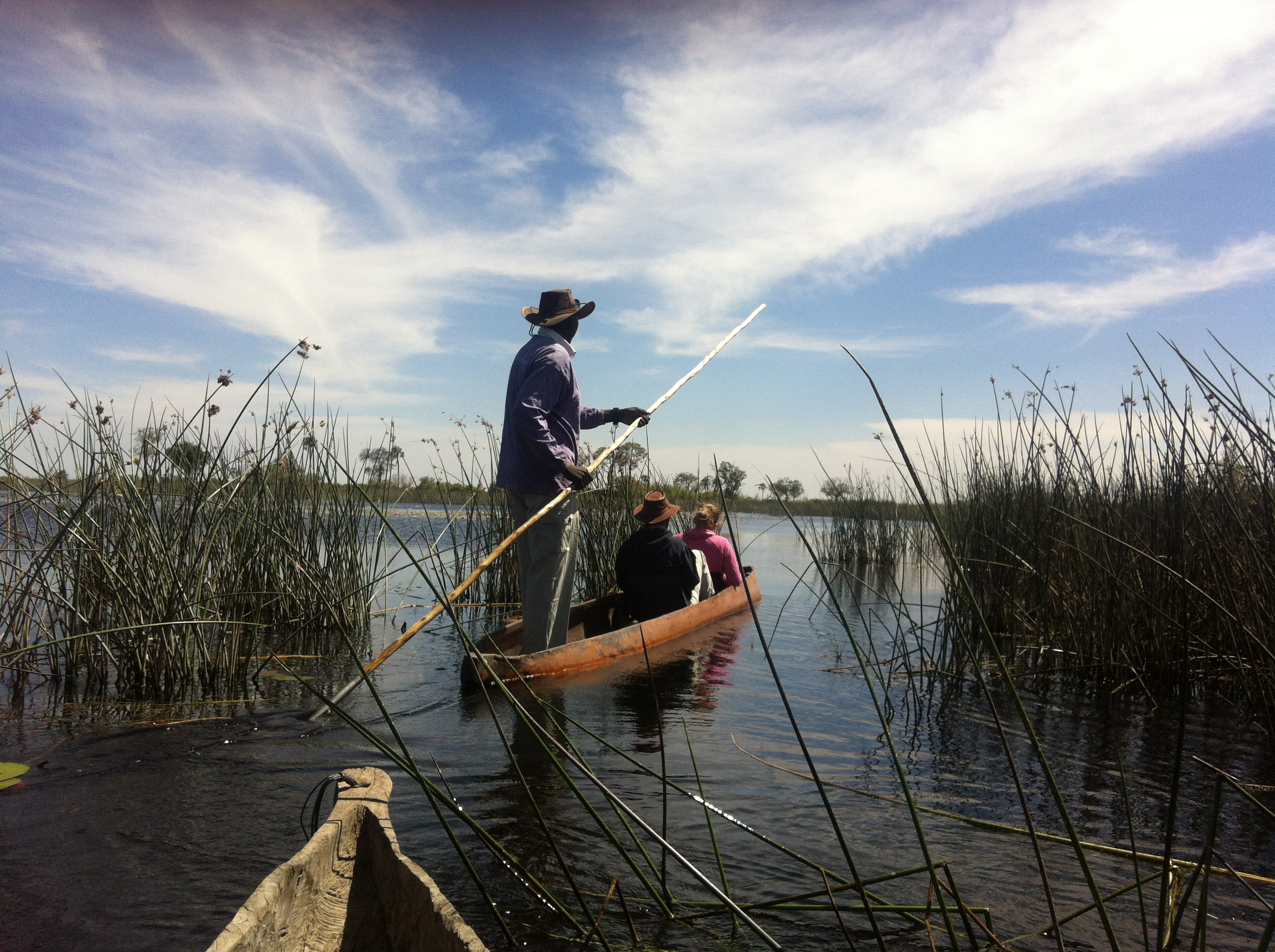 Being staked by mokoro is the calmest and most peaceful way to experience the Okavango delta, unless... 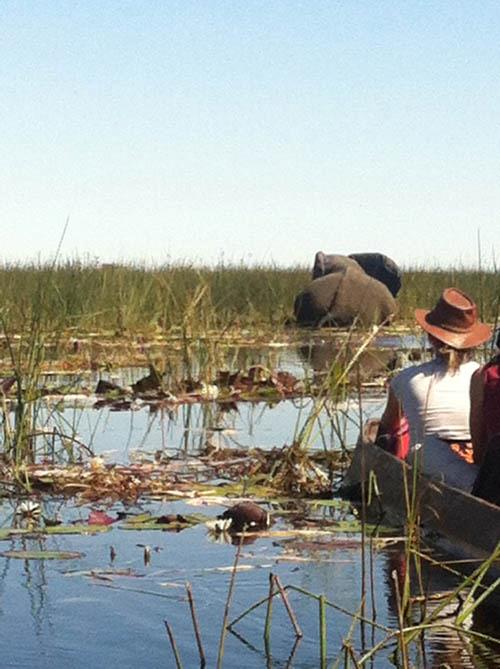 ...an elephant blocks the waterway We booked a day trip which consisted of a combination of an approximately 20km power boat ride that brought us to the so called "buffalo fence" from where on the Okavango delta is reserved for wildlife only. The area south of the fence is a wildlife management zone in which some cattle grazing is still allowed. From there we switched into the traditional mokoros, (dugout canoes) operated by a local community trust. This brought us to an island where we were treated to a game walk for several hours, encountering elephants, giraffes and numerous other game on foot. Quite an experience and it allowed us to get a string of orgonite laid out approximately 40km into the delta from Maun. The nice thing about an orgone safari is that it always combines duty and pleasure... 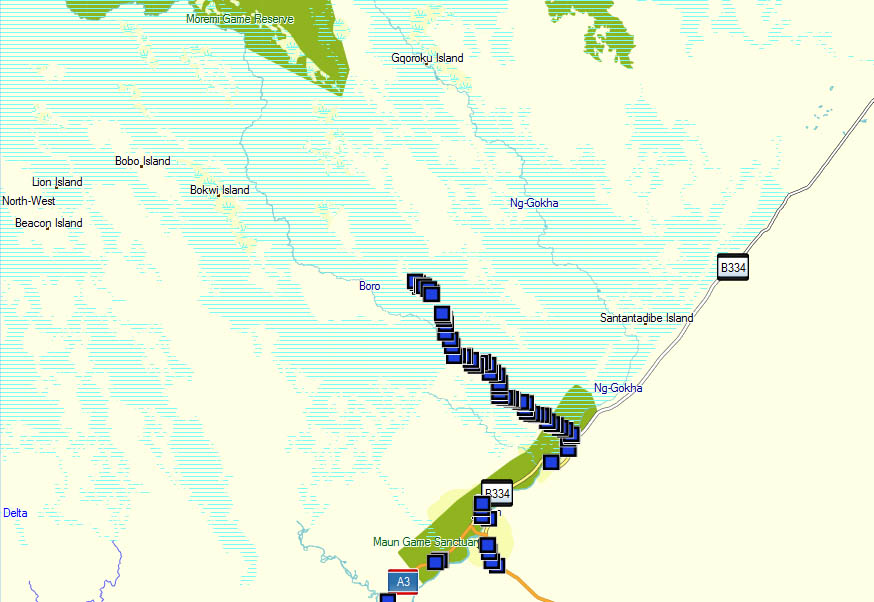 This little tourist excursion brought us half way across the delta towards Moremi Game Reserve. Not bad for a days work... 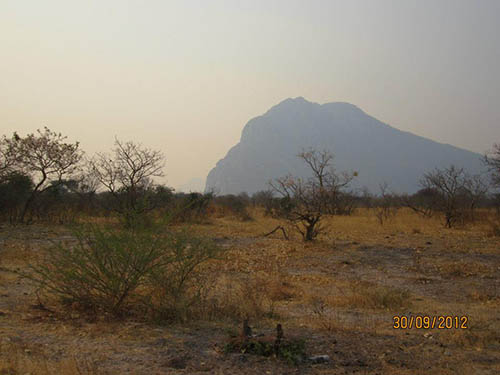 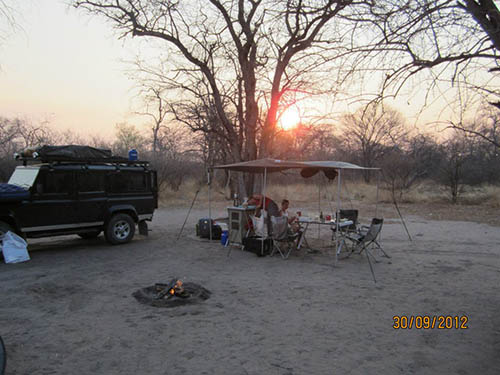 Our camp at Tsodilo 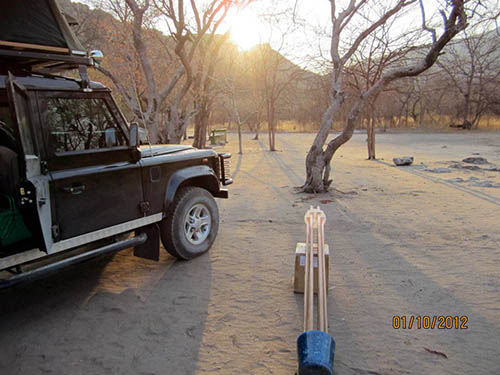 Calming a nasty wind Did you know that you can deflate a storm with an ordinary CB? Experience suggests that an orgonite CB creates a low pressure zone in the direction of the pipes. Since Storms blow from high pressure to low pressure that would explain the often experienced miraculous calming effect we achieve when pointing a CB against an unpleasant gusty wind like we experienced during our first night at Tsodilo. That wind had been active the whole night and rattled our tents. At first sunlight, I got the CB out and started pointing it against the direction of the wind. 10 minutes later the wind was gone and did not come back during our whole stay. The "low pressure theory" would be one of the more mechanistic explanations of why CBs can provoke rainfall in arid environments. Of course you have to drop your mechanistic pseudoscientific pretences in order to explain HOW a CB does this. The new physics is ether physics, guys, get used to it! 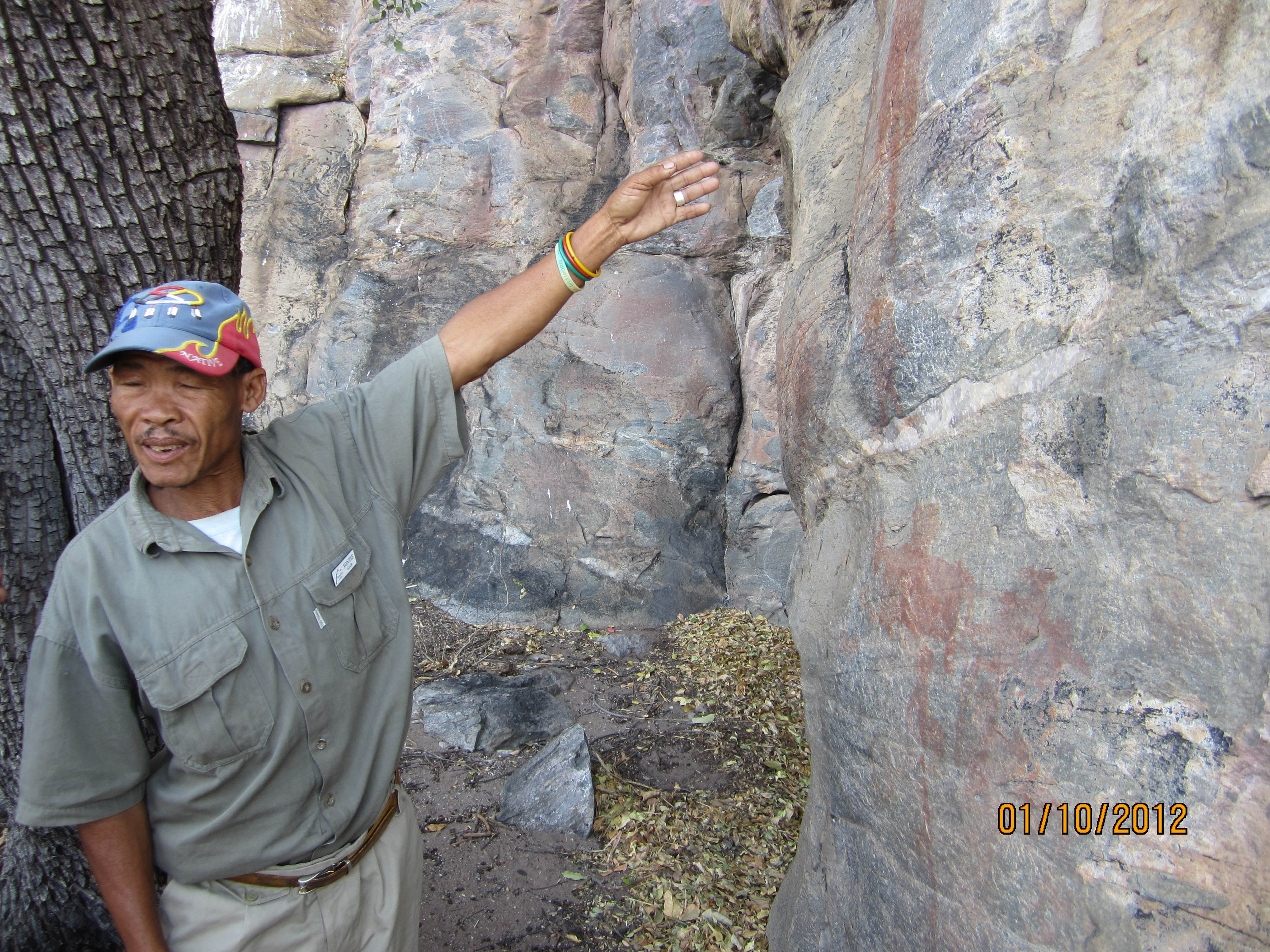 Our guide Xontae explaining a rock painting Xontae grew up on the mountain in the traditional San way. He is the elder or headman of the nearby iKung village of the San clan of same name.I know there's lots of stuff he knows about these mountains that he did not tell us...That's absolutely alright with me as their spiritual tradition is none of our business. But during 2 days of walking together we grew a lot closer in a nonverbal way. He is the last one of his kind who has still experienced the traditional way of life in its original form in this area. 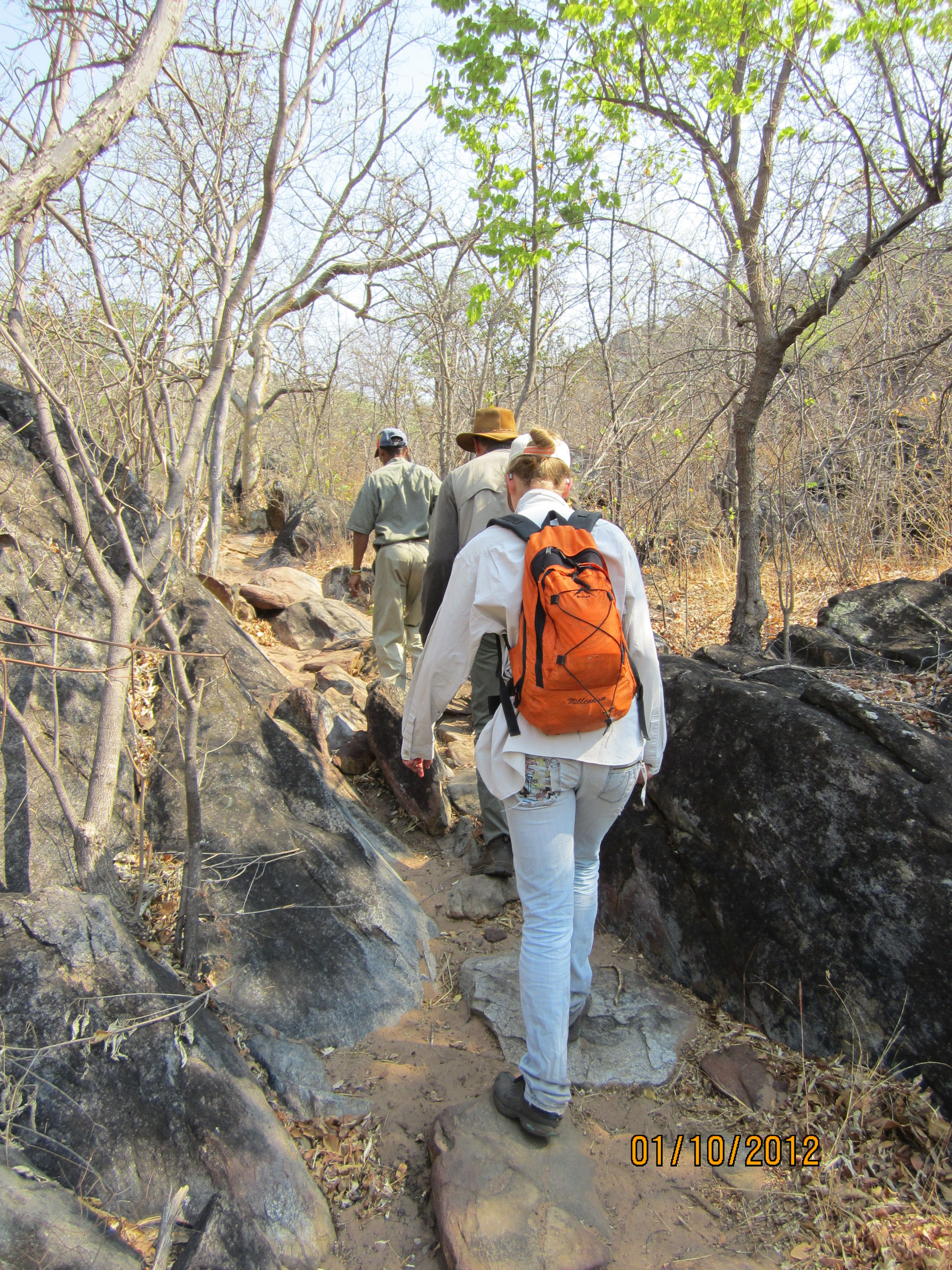 Hiking on Tsodilo with Xontae 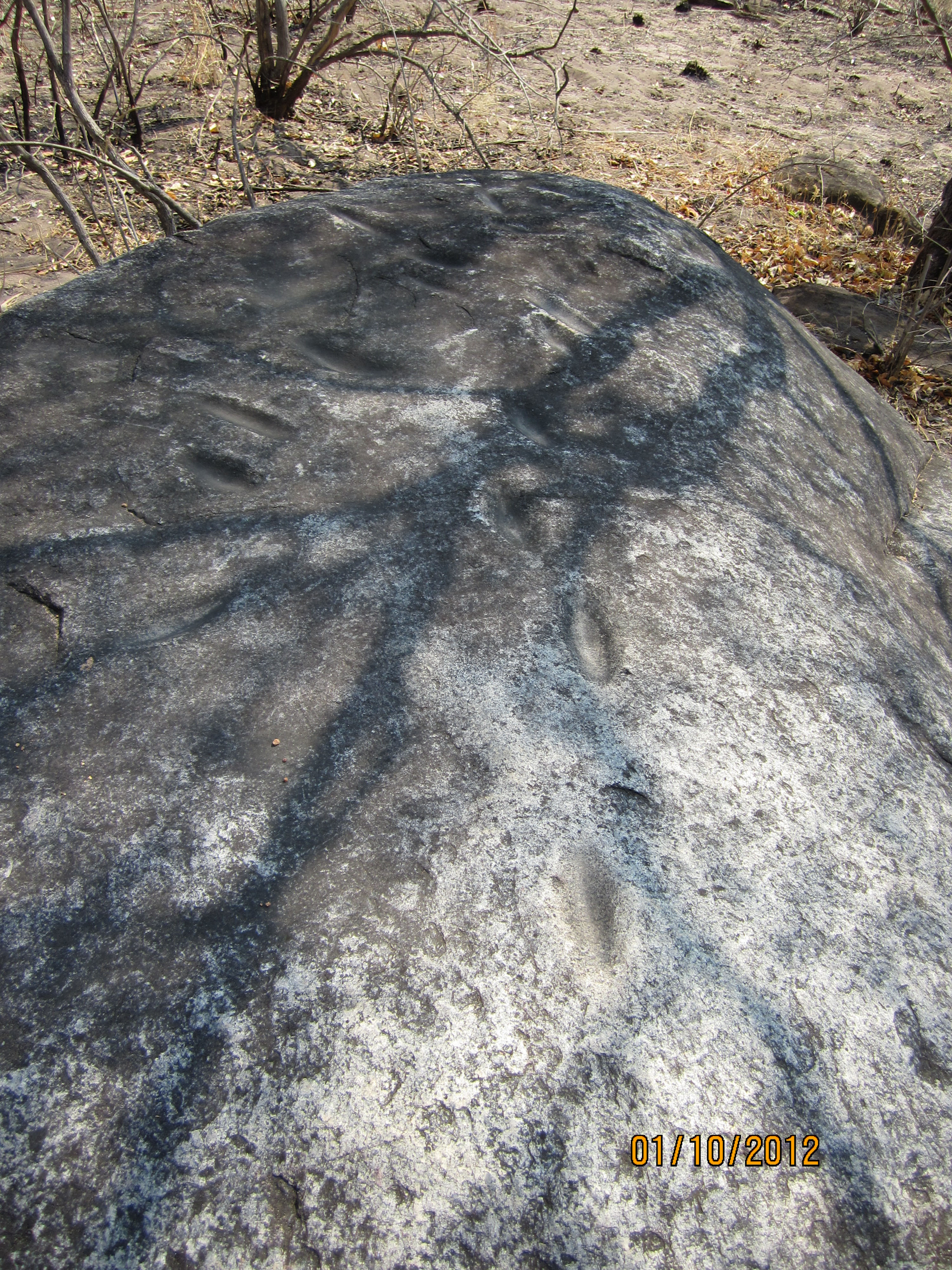 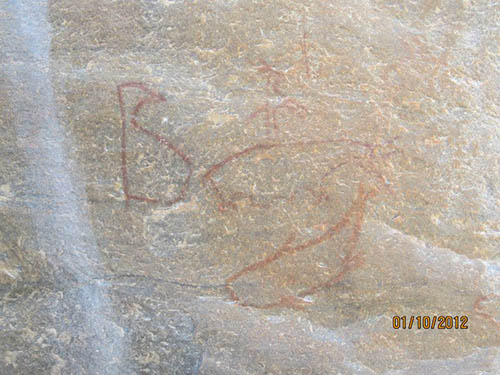 This depiction of a penguin, a sea lion (?) and a whale shows that people were not isolated or stationary in the old days (some of the paintings are believed to be more than 20,000 years old). The nearest access to the sea is more than 1000 km from here. 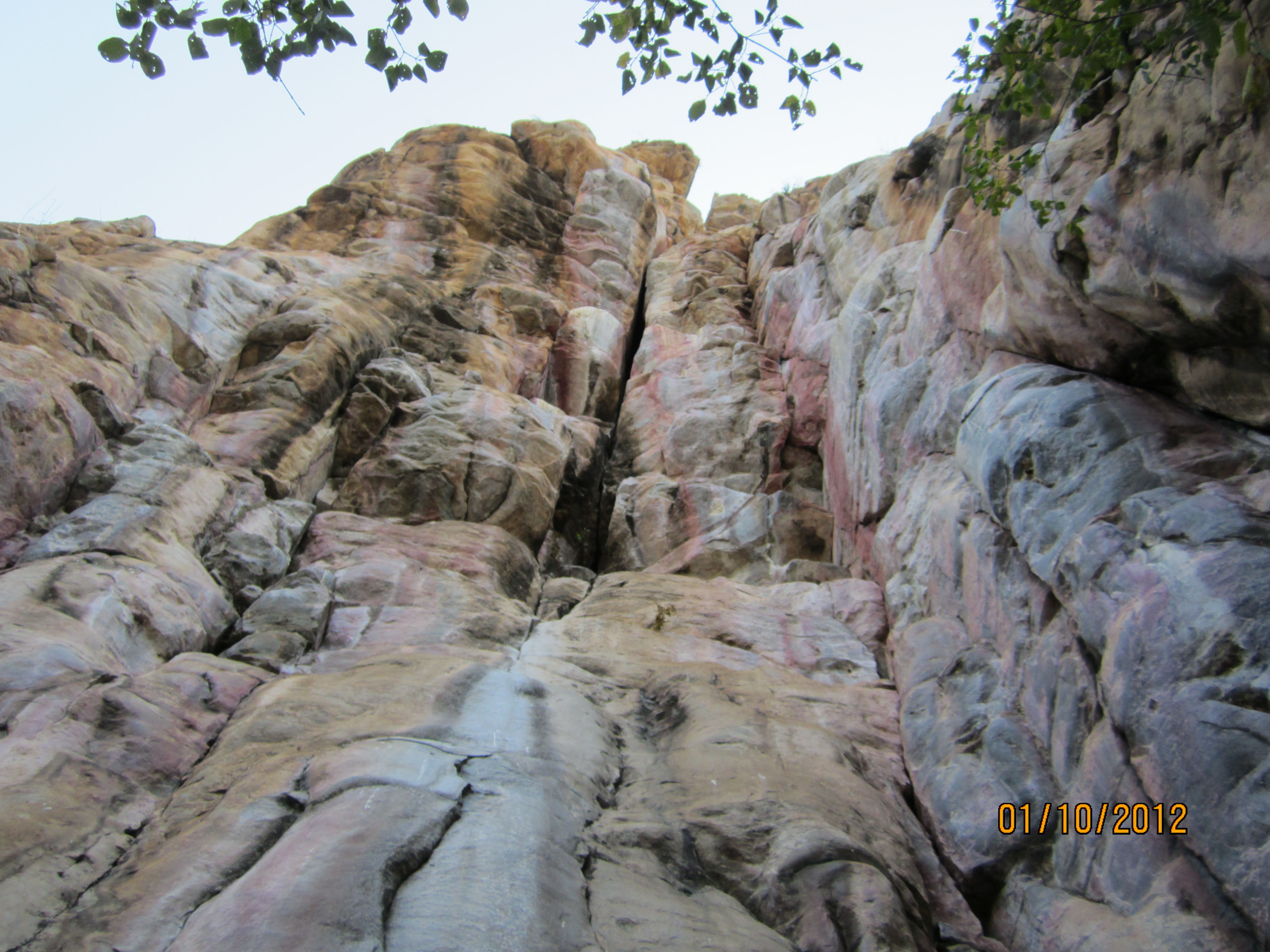 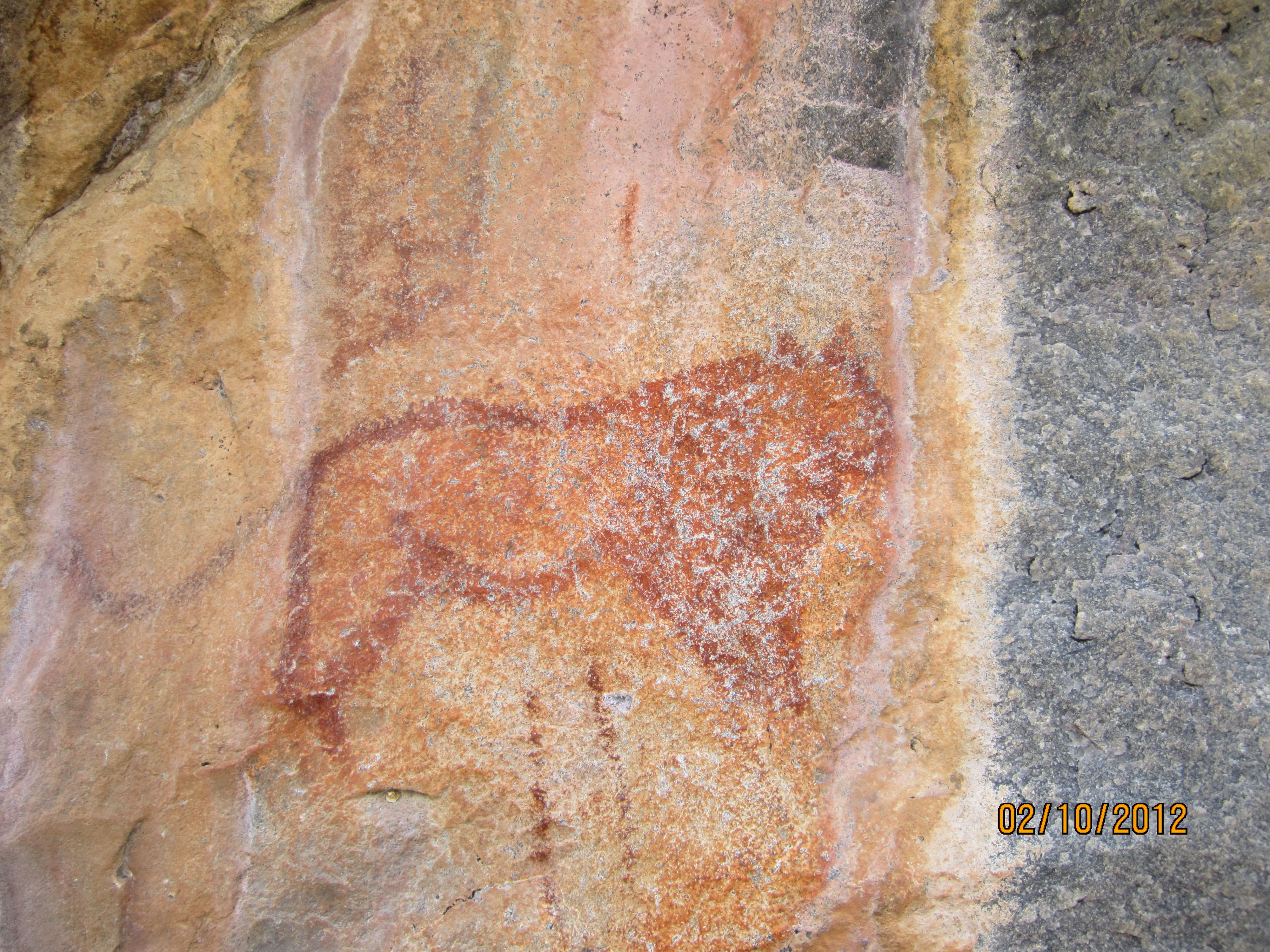 Depiction of a lion 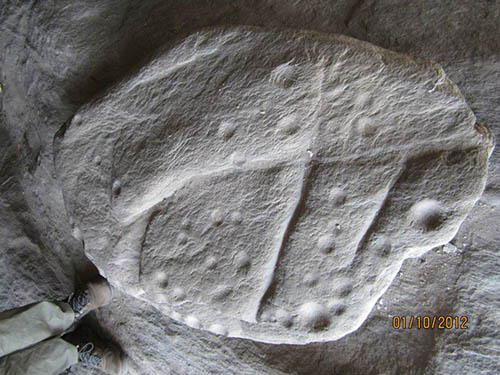 Ancient game board in a cave 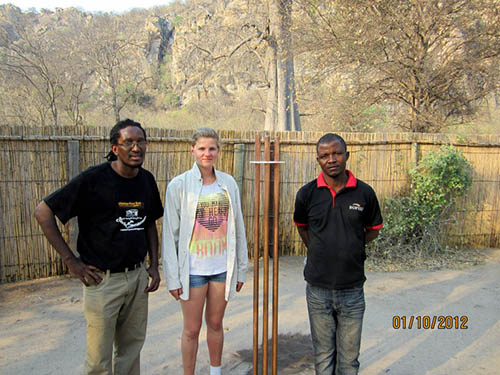 The museum manager Fane and another guide, nicknamed Darkie adopted our Cloudbuster which is now part of the museum environs. The holy well of the pythons This well is the only permanent source of water on the Tsodilos. It is considered holy and the water is ascribed magical powers. The well is the permanent home of several python snakes who are also considered sacred all over Africa. (presently 7 are said to live in the well) So much about our reptilian ancestry and annunaki gods... In Africa things are at least a lot straighter forward than elsewhere in this regard.Of course we left some gifts around the place. I was also instructed by a Sangoma to do something very personal at this place. Gonna keep that personal... 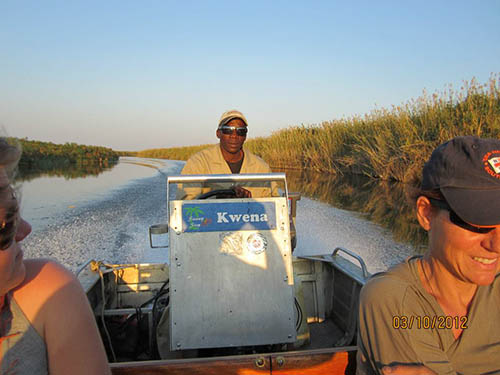 Gifting the western panhandle of the Okavango Delta 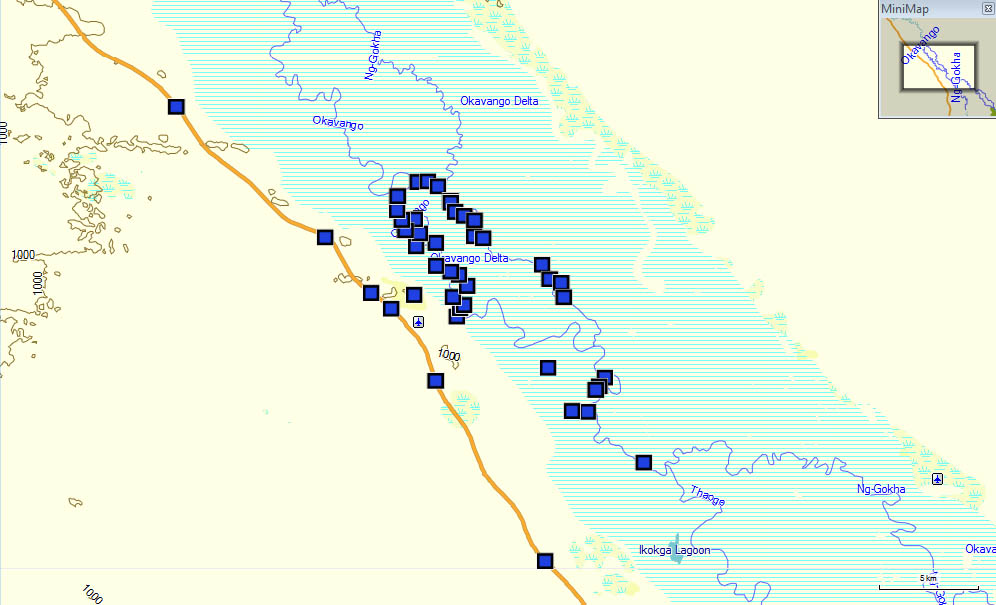 Boat trip western panhandle Before fanning out into the actual delta, the Okavanko meanders through a long stretched area called the western panhandle. Often changing its course and splitting into different channels, all the water that eventually goes into the delta passes here. In a 3 hour power boat ride we were able to gift this area strategically, so that all water going into the delta now passes over our TBs. 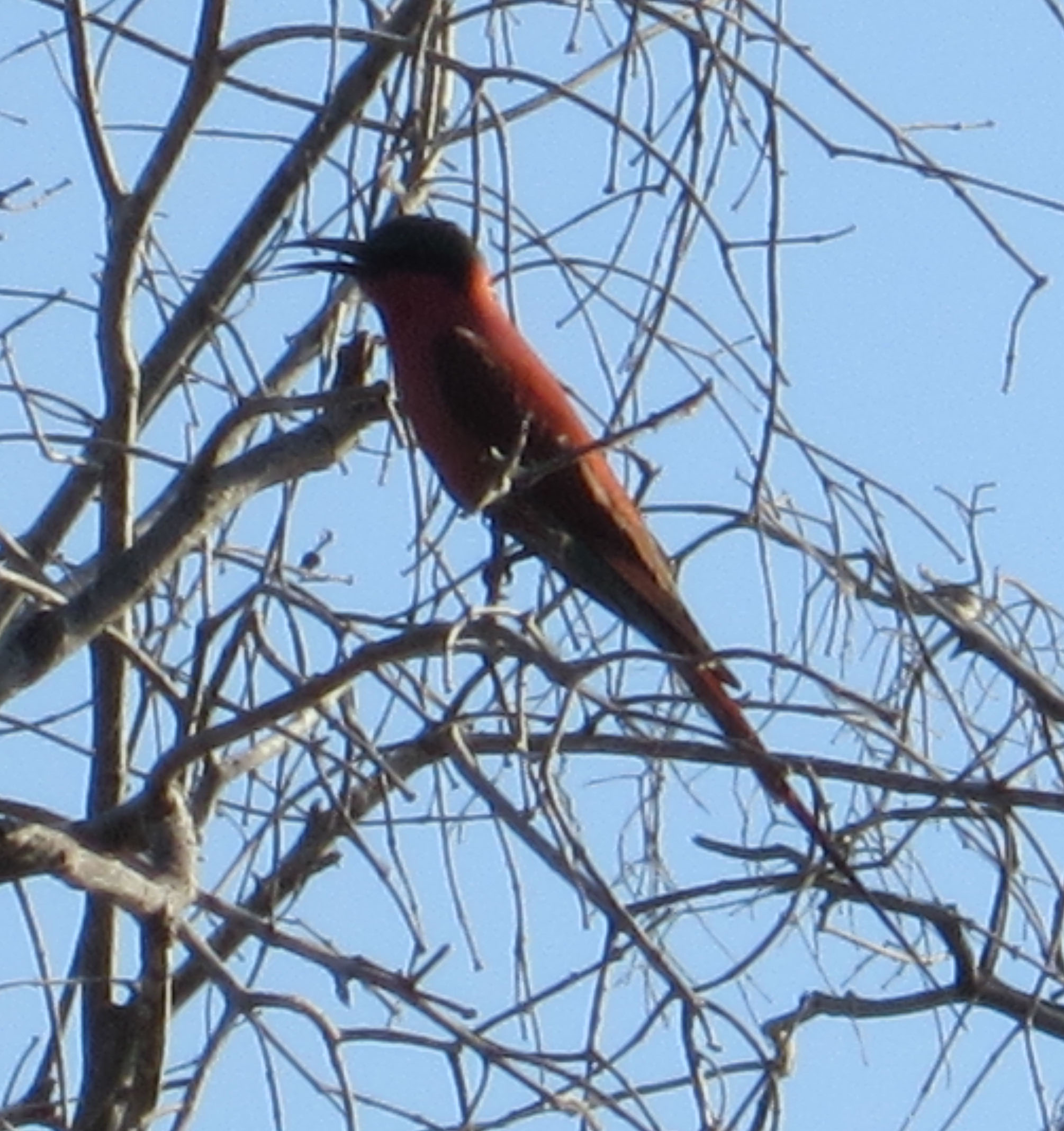 I almost fell out of the boat when this guy suddenly made a very fast move... Closing on a funny note: That's how they see us! Camera wielding white tourists in Africa.Seen at Kuru Art contemporary San Art Project in D'Kar near Ghanzi Map of the gifts left on this tour (blue squares) in the context of previous gifting efforts (blue dots in magenta squares)Approximately 600 small orgone generators (TBs and some pyramids and HHGs) were deployed on this trip and a CB found a new home at a holy mountain. The rainy season in Botswana is only about to begin in November or December, so we did not expect anything drastic to happen immediately. We will get the reports about subtle and not so subtle changes from our friends in Botswana over time.