Orgonite in Action: From Paradise on Earth to Masonic Street and back

Over Easter we visited our new friends Vanessa and James, the organic farmers in the Free State (See Report: The Free State busted again II) to spend some restful days and exchange some ideas. What a paradise on earth the have created on their farm!We found again, how compatible the principles of organic farming (based on an understanding of life processes and SUBTLE ENERGIES) are with our orgonite experiences.Since the farm had previously been attacked, (more like a warning, nothing was stolen, but the office door broken and the desk messed up) possibly engineered by some agrochemical interests opposed to organic farming, we ringed it with about 30 TBs. James told me that after we placed the CB in mid February, not only did they get abundant rain, but also the cattle looked much healthier. James feels that this a direct result of the improved energy, not just the better feeding through improved growth of pastures.At his office I saw a copy of "Farmer's Weekly" from 26 March 2004 with a map of rainfall in percent of long-year average. Most amazingly the areas showing above average rainfall match very well with the areas we have so far treated with orgonite. The untreated areas with exception of the eastern part of the Western Cape are still showing catastrophic drought conditions. 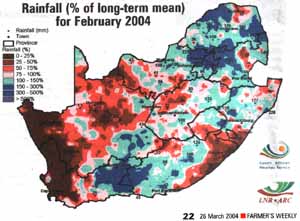 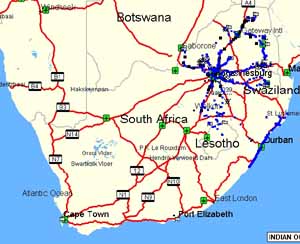 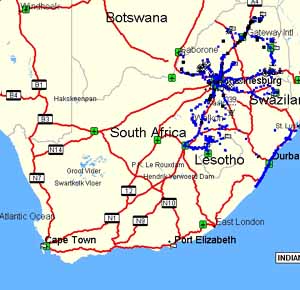 Since Our intensive busting of the Eastern Free State in mid February may have influenced the statistics, I'm showing the status after the placement of 2 more CBs in the area and busting of the Welkom/Bloemfontein/Ladybrand/Ficksburg Area in mid February. The coincidence in the northern parts of the country is pretty much 95%. I shall pay more attentiuon to such maps in the future and target the areas shown as below average with priority.

ORGONITE TEAM FOLLOWED BY SYLPHS - THE TRIP TO THE EASTERN CAPE

From here I wanted to do a busting trip to the Eastern Cape, which had still not received much rain and was so far not reached by our eforts. Unfortunately James who originally wanted to accompany me, had to stay home due to some urgent work coming up on the farm. So it looked like I had to do it alone. Luckily my elder daughter Katharina (whom I would call Bustagirrrl on this trip) volunteered to accompany me. Friederike and my younger daughter Isabella stayed on the farm.Lately there has been a lot of talk on the forums about the nature spirits, especially the ones of the air, also known as sylphs.I am not able to say if these beautiful cloud formations are "beings" in a conscious sense or just swirls and vortices of energy.I have been told by friends in our network that I would see them more often now and that's exactly what's happening.Looking at them regularly makes me smile. While the scientific question of what these things are, may still be open, I will refer to them as sylphs henceforth.At the day of start-off, Thursday 15th April, we were greeted by a whole bunch of them, as if they had known that we would be ready to go on that day. (The days before we did not see a single one of themIt felt like a celestial escort had arrived, waiting for us to get moving. 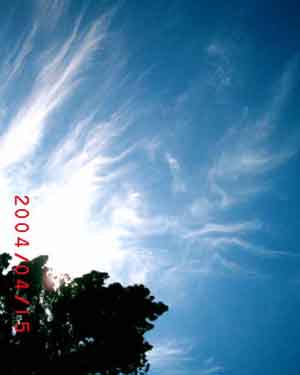 Sylph over JCM's Farm on day of departure for Eastern Cape The trip was made possible by a donation of Uli Dressler from Dresden. We carried some 250 TBs, 5 HHGs and a Cloud-Buster.As we went along, we soon noticed that the sylphs were following us. They formed rapidly over us and stayed at those places we had already passed.Careful observation confirmed that they were not present ahead of us or far left and right from our path.An amazing Feeling.Look at some photos here: 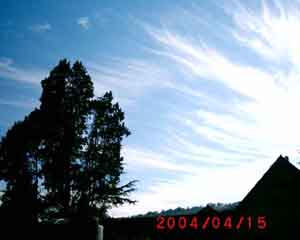 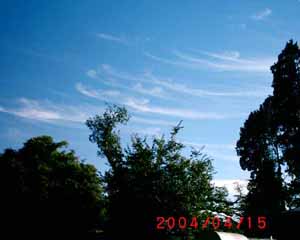 Our escort is standing by 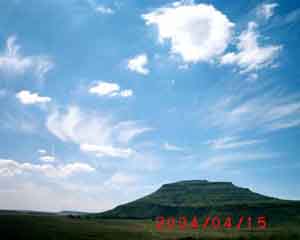 Some vortex is coming alive with happy nature spirits 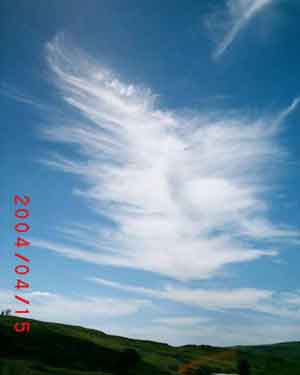 It is hard not to think of them as etheric beings 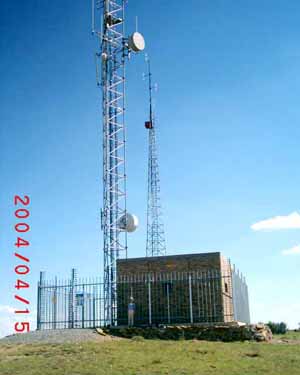 It took us more than 2 hours to get to this mountaintop array, but.... 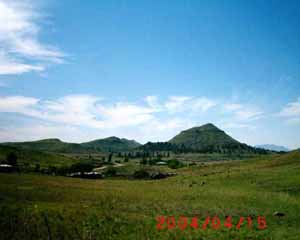 ....we were allowed to cross beautiful mountainscapes like this! 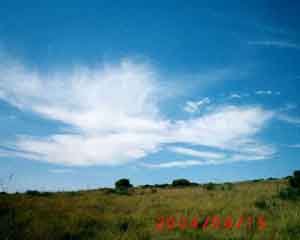 More sylphs as we go along... 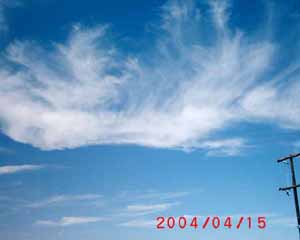 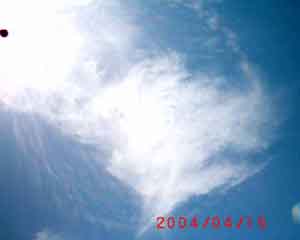 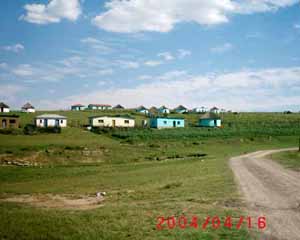 Sylphic sky over Xhosa settlement in the Eastern Cape 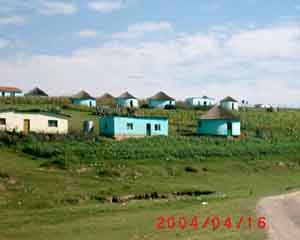 The Cloud-Buster we had brought went to Rob and Serena in Bathurst, a small historical settler town 50 km south of Grahamstown. The choice of destination was very spontaneous, as we had only just met them at James's farm in the Free State and the originally intended recipient in East London was still away on a trip out of the country. The Grahamstown Area had not even been on our itinerary originally.They are making herbal ointments with bees wax and organic sunflower oil (from James' farm) and it turned out that Rob is a very well studied expert in the history of the Eastern Cape, especially the history of the wars between the Xhosa and the encroaching settlers (with great sympathy for the side of the Xhosa), with a special emphasis on the role played by Freemasons and other secret societies in creating the present day situation. As short as the time was, we had the most interesting conversation. Coincidentally it turned out that Port Alfred, a small port nearby and Grahamstown, the longtime in-official capital of the Eastern Cape were Masonic hotspots of note. Coincidence? Who or what had lead us here?Port Alfred even sports a "Masonic Street" where the local lodge is befittingly situated.One should not suspect the significance this little town has for the satanic network of the Freemasons:Prince Michael, the Duke of Kent, is coming there personally to initiate the new Grand Master... 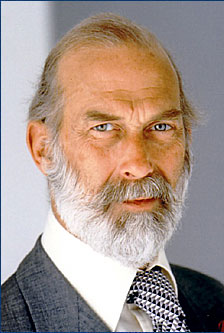 Prince Michael Duke of Kent,Grand Master of the "Grand Lodge of Mark Master Masons" and "Provincial Grand Lodge of Middlesex". Would you like to leave your daughter alone in one room with this man?

We have already elaborated earlier that orgonite doesn't only work on the physical but also on the spiritual plane. (See Report of Uganda Trip in Nov. 2003) Gifting Masonic Lodges, places of human sacrifice and blood ritual - meant to spiritually enforce the age-old spell of covert control and bondage of humanity under the joke of these self proclaimed "masters of the dark and occult arts" - has become a more and more important part of the bigger perspective of our work.So we gifted the lodge well and of course all the towers and other places of bad energy generation.Rob then pointed out the Masonic layout of Grahamstown on a tourist map for us and the place of the old lodge as well as the new (active) one.As we were just busy hiding our easter eggs there, we saw some cars pulling up and members entering. To describe the one older man (adorned with a golden medaillon and other ceremonial garb) whose face I could recognise as an old reptile is not an exaggeration. The head looked like that of an old turtle. Generally we always feel the stale and negative atmosphere around these places.No wonder Freemasonry is (at least in it's visible outward circles) on the decline. It just all looks so outdated. I would imagine that a lot of the occult power is nowadays withdrawn from old fashioned Freemasonry and invested into the various flourishing New Age cults. This bizarre organisation has however been the major controlling force (In seeming competition with the Afrikaans Broederbond that had different membership and ritual, but of course on the top obeyed the same controlling force) in South Africa even more than in many other places.I have heard many accounts of how people were approached to join and how it was considered absolutely futile to start a professional career without being a member... The Anglican Cathedral is placed on a triangular space at the intersection of the 2 main roads (1 road entirely commercial, the other entirely religious, if you want to call the Masonic cult a religion) It has a crypt, that is not mentioned in any of the guide leaflets available for tourists. This crypt has historically also been used for Masonic ritual and so the place got gifted well. 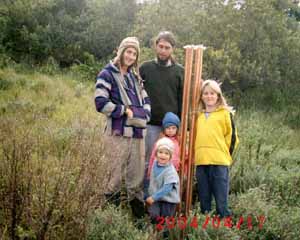 Serena, Rob, their children and BUSTAGIRRL with the new CB in Bathurst 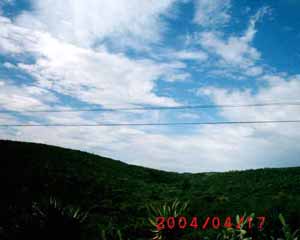 And also here the sky turned Sylphic after the deed was done!

After driving 2500km in 3 days and gifting about 230 spots we were quite exhausted on return to James' farm. It had rained all night in the Eastern Cape on the 2nd day and into the morning of the 3rd day. Some scattered thundershowers were forecast by the weather bureau, but a constant downpour over a large area accompanied by a strong wind coming from the north?

COMING HOME AND DAMAGE (TO THE ENEMY OF COURSE) ASSESSMENT

When we drove home after only 5 hours sleep, we found it had not rained much in Jo'burg in our absence. So, I was already getting a bit anxious. The night from Monday 19th to the 20th then surprised us quite a lot, as in the middle of the night a major downpour accompanied by very impressive thunder and lightning started and went on until 8 in the morning. This formed very rapidly almost out of nowhere (there was a bit of cloud build-up in the evening, but nowhere suggesting THIS) and produced a respectable 26 mm of rainfall. We have by now received the full annual rainfall with 5 more - albeit traditionally dry - months to go. 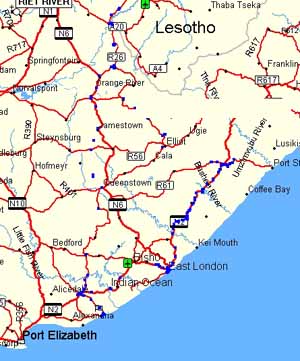 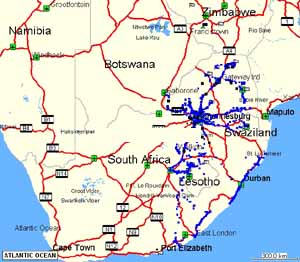 The new state of affairs in South Africa .Since these maps only show the gifts that I have personally recorded with my GPS, the actual situation is better than shown here. Trevor has done some gifting in Kwa Zulu Natal and Cape Town, Andy has done large parts of Botswana.So I think we will reach full (at least preliminary) coverage in South Africa this year.