In pursuit of our concept that the current drought conditions may be maintained by a row of HAARP arrays along the coast in order to stop the inflow of moisture from the Indian Ocean, we planned a camping trip for the whole family, down to the coast.This was to round of the results of our recent foray along the border of the Kruger Park.We took off on the 31st of December and headed for the southernmost part of that costal stretch first.We carried 260 orgonite TBs and 36 "etheric orgonite pipe bombs", of my "stick-hand -grenade" type. The latter have proven extremely effective in water gifting.On our way down, we saw the most gigantic block of chemtrails I've ever seen: Visible as an unnaturally straight fog bank from at least 30 km afar, the spraying reached as far as the eye could see.In the Map below, the ochre bar is indicating the estimated extent of the Spraying.The area looked particularly barren and has probably been subjected to such treatment for quite a long time. 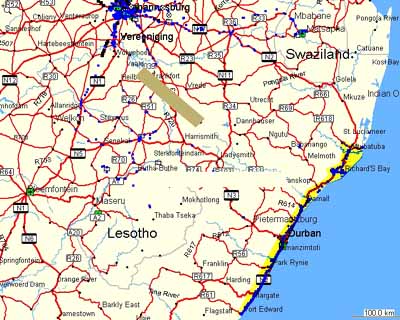 Map above shows gifted area along coastline in yellow. Gifted sites are blü dots. The ochre bar indicates estimated extent of chemtrails.Busting all towers along the main highway between Durban and Port Shepstone on our way down, we also gifted all intersecting rivers with our "etheric stick-handgrenades". 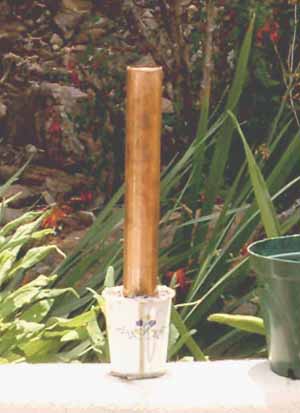 Large etheric stick handgrenade 35 x 350 mm. We used 28 x 280 mm.I thought that putting the devices into fresh water would preserve them for longer and since the road is pretty close to the shore, all the orgone charge would be distributed out into the sea anyways.We got nice rains already the first night and pristine weather thereafter, with occasional showers.What was even more gratifying: A lot of rain in the hinterland happened subsequently. Huge thunderstorms over Estcourt and along the Drakensberg Mountain range. The North Coast was not as easy and we feel we have to come back.Other than at the South Coast where the Concentration of Towers is only along the coastal Strip, Northern Zululand and Zululand is heavily infested with full blown HAARP arrays. 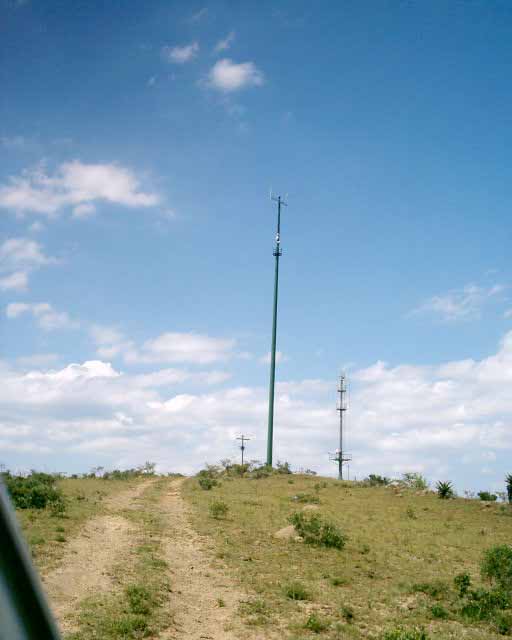 Blue hole over gifted tower array in Zululand. We did the Highway through Durban, just everything that was in reach without exiting the highway and the whole coastal strip up to Sant Lucia.This included the agglomeration of Empangeni / Richards Bay that proved heavily infested.I had dowsed the major HAARP points since I wanted to be more strategic about my targets but couldn't then resist the temptation to bust everything that came in sight.Surely that coastline could be much strengthened by placing a few CB's and certainly Zululand can use a lot more busting.No wonder they put so many towers there if you think what a proud and independent minded folk the Zulu have always been.We were finally awarded a bit of a dramatic thunderstorm, albeit the rain measured was only 15 mm in St. Lucia. Durban apparently got more. 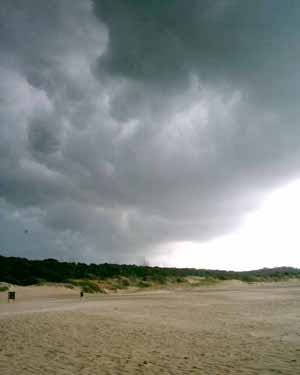 Build-Up to Thunderstorm in St. Lucia 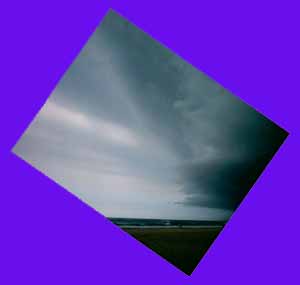 The whole area is still a drought catastrophe area, with extremely low dam and river levels. Given that the whole of December of December only yielded 17 mm (normally more than 100) of rain, our little storm was a good start at least.We have to come back with more devices soon, because if we don't stop the drought now, another planting season will be lost. 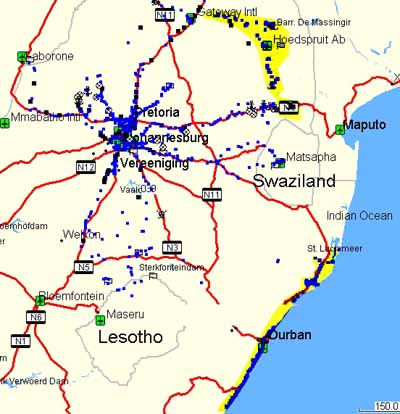 Map above shows the combination of our 2 recent forays highlighted in yellow.The situation is actually better than shown here since Trevor has also busted the road down from Jo'burg around Swaziland, so that in fact the two yellow areas could almost be connected.On a closing note I want to mention an incident that showed us how the loose network of CBers worldwide is becoming a force to reckon with. We had terrible problems with our vehicle, that finally resulted in complete breakdown and necessitated a full gearbox overhaul. We had absolutely no funds to pay for the repair and posted a "cry for help"on http://forums.cloud-busters.comIn no time friends that I haven't even met have come up with the money to get it fixed and even a little more so that our anger when we got robbed on the camping ground on our last night was kind of compensated. The surplus will of course be used to fund the next campaign soon.What a great group of people to be associated with.