Orgonite instructions for use - Episode 1:

The orgonite cloudbuster was the first orgonite tool that Don Croft actually invented, combining Dr. Wilhelm Reich's pioneering experiments from the 1940s and 50s with the new material compound "orgonite" invented by Karl Welz who used it mostly for very effective radionics machines. (Demonstrating the consciousness dimension of orgonite as all these applications have to do with manifestation or intention boosting)

Interestingly the first thing that came to Don's mind when his new device was ready, was to direct the 6 pipes of his new device at the city hall of his town which was notoriously infested with corrupt politicians. Orgonite seems to have an almost mystical quality of furthering good and discouraging evil.

What does an orgonite cloudbuster do?

Its 6" or 1800mm long copper pipes go into resonance with the atmospheric ether in a very large area around the device. Amplified by the crystals at the bottom of the pipe an exchange takes place whereby stagnant orgone (DOR) is drawn into the orgonite base and sent out again as reinvigorated Positive Orgone eneRgy. (POR)

In heavily DOR infested areas we have observed this process as a drawing in of "blackness" in the first few days (typically 24-48 hours) the sky almost looking smokey as if there had been a large fire. Then a new sparkle became visible. The living energy can actually be observed as little moving bubbles almost like champagne bubbles moving randomly.

This re-energised healthy state of the ether will now allow all kind of self healing processes to occur. A lot if this is unpredictable.

You should not be attached to a specific outcome. A cloudbuster is neither a rainmaker (although the outcome of the self healing process is most likely healthy rainfall in drought areas) nor is it strictly a chembuster.

Some of you will now be disappointed to hear me say that but it has to be said:

Yes, in most cases, chemtrails are being dissolved rather rapidly in the positive orgone field produced by the cloudbuster. That is a result of the miraculous self healing processes enabled by the living energy. And in case you would ask: these chemtraisl are actually disappearing without their poisonous fallout ever dropping to earth as some would fear. We can only speculate what kind of alchemical process is happening there. After all, all matter is energy and can be transformed back into energy as well as vice versa. 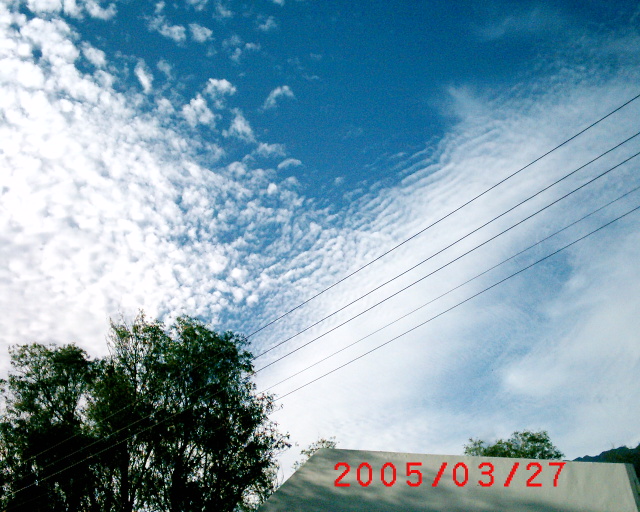 Chemtrails in state of dissolution over the City of George, South Africa Some sensitive are saying that it's actually conscious beings called sylphs that do the job of gobbling up the chemtrails. Believe in spirits or not, there are many processes in life that we don't understand and that mechanistic science is not able to describe. And yet we have observed them over and over again. (See my article "Orgonite Proof ")

A little remark on chemtrails:

Like so many "conspiracy" information threads out there a lot of what is being said about chemtrails is pure fear mongering.

Chemtrail spraying reached its fearful and lethal peak in 2002 when nobody took notice of them, especially not the present day screaming busybodies..

Due to the wide proliferation of Orgonite CBs in the most affected areas such as North America and Western Europe the chemtrails visible today are mostly reduced to rather harmless water vapour. This is also why they will sometimes not really show any reaction to a cloudbuster. They are already quite harmless. The really bad chemtrails had a sulphuric tinge to them and caused massive respiratory illness, itching eyes, and all kinds of diseases. This is just not happening any more. From the standpoint of the secret controlling cabal, the programme has failed to deliver its intended genocidal result.

It is important to acknowledge a victory when one is at hand.

Today's busybody chemtrail activists are fighting a bogus battle that we, the international orgonite movement have started winning 10 years ago. The now classical movie "Chemtrails - Clouds of Death" by our colleague CBSwork illustrated the gloomy mood of early chemtrail fighting days. CBSwork is a pseudonym that was used by a former secret agent and illuminati insider who survived several assassination attempts when he wanted out and became an avid orgonite gifter in Los Angeles and generally Southern California, literally freeing that notorious city from it's perennial smog bowl.

(The word "smog" was invented to describe the DOR laden atmosphere of LA where a proverbial mixture of smoke and fog was reducing visibility to very short distances most of the year.) We now understand that the "binding agent" that helps uphold such conditions is always "DOR".

So, why still take the trouble to put up a cloudbuster?

Well, don't be fixated on chemtrails alone! The atmosphere still needs a lot of cleaning and revitalising and you will feel the uplifting effect over your whole region.

Where to put the Cloudbuster

A Cloudbuster's energy could be amplified by standing on special power spots. Most people will put it somewhere in their garden. Follow your intuition to find a spot where it feels good. Cloudbusters like to stand under a tree or amidst shrubs or bushes. They absolutely don't mind a vine climbing up on them.

They also seem to like standing on soil or even with the base half buried (a good idea order to give them some stability) It is however not necessary to ground them. We have had good results with a CB operating from a balcony so don't worry. Certainly all those voices suggesting that touching a cloudbuster could be dangerous when it is not grounded into a water body via a strong cable are not based on real experience with orgonite cloudbusters but are simple but incorrect extrapolations of Wilhelm Reich's experiences with his non-orgonite cloudbusters. They did indeed need to transfer the orgone charge into water in order to get the energy moving because they did not have the miracle compound orgonite.Putting up a cloudbuster in our experience does not eliminate the necessity to neutralise all cellphone towers in a wide area around the CB - piece by piece - by placing small inexpensive towerbusters next to all of them. We call this activity gifting.

In the next episode I will talk about the two other classical orgonite devices, the HHG and the Towerbuster