The so called "Cape Town Water Crisis" has been a world wide media event. When something happening in remote South Africa gets 5min coverage on CNN (CIA), it must be important to "them".

Remember, the water scarcity meme has been hammered down our throats at least since the turn of the millenium as the next cause for massive wars and upheavals all over the world.

If you - like me - think that such memes are constantly being created for sinister purposes, this one should have all your alarm bells ringing:

A perfect media campaign involving all the usual co-opted NGOs has been rolled out to instill the maximum amount of fear and dread into all Capetonians and visitors to the city. Saunas in Gyms are closed to save water (absurdly even the dry saunas) and your shower is limited to 2 minutes. Everywhere, through posters, stickers, billboards and TV ads,  one is reminded that water is going to run out any day now and Capetonians will face a martial law type situation where the army will dole out small portions of water to the destitute masses.

So far the imagery invoked by the magic masters of public perception.

None of this is of course happening. Day Zero has now been postponed to June or July which is the rainy season in Cape Town. In other words: It's not happening.

(Just like global warming, peak oil and all the other other mega-scare memes)

Yes, there has been a drought for the last 2 years and most of this is due to a massive onslaught of chemtrails and electromagnetic "ENMOD" weoponry unleashed on the whole region. That is of course not in the news and on the frontpages of all the overexcited NGO publications.

This drought has also affected the central inland area of South Africa including the Karoo and up into the Free State where massive chemtrailing was in evidence up to mid 2017 when we donated a specially GANS enhanced Cloudbuster to an experimental Bio Farmer near Ficksburg.

In our earlier days of orgone activism we would have probably rushed to do something about it much earlier.

But after 15 years of acting as the de facto weather janitor for Southern Africa one can get a bit tired of bearing that responsibility all alone.

But it seems we have to, as nobody else is stepping up to the plate.

Of course Cape Town was thoroughly gifted in the past and we donated substantial amounts of orgonite to friends there to keep it up.

But it seems that new, upgraded weather manipulation tech has been deployed and that asks for new answers.

Please check my latest blog post for additional voices in the mainstream and alternative media questioning the official narative of the Cape Town Water crisis.

I personally think that the source of the problem is out at sea and some massive sea gifting will be required to resolve it for good.

In the mean time we need to do what we can to turn the energy around on land with what we have.

It seems that the combination of Keshe-technology (GANS water = Gas In it's Nano State) with orgonite is a bit of an answer to this, and it suits our new "lazy approach" to gifting.

What I'd really like to do is get on a proper yacht (sail or motor) and put another defensive perimeter of enhanced orgonite arount the Southern tip of Africa.

We have aready done quite a bit in thet direction, but I think one has to go further out, about 50 miles off shore. Definitely a project for the near future that needs some funding and planning.

In the meantime we went on small gifting tour with some 300 TBs and 2 GANS enhanced Cloudbusters, covering mostly the Hinterland of Cape Town, from Port Elizabeth to CT on roads not previously gifted.

What we do on such a tour is basically toss a TB at least every 10 km, definitely into all water courses we cross and definitely near all cellphone towers and similar installations. (radar and other electromagnetic radiation sites)

This creates a network of new positve energy lines and increases nature's resilience against all the different stress factors. It definitely raises the vibrational level in the area and thereby contributes to foiling all types of negative agendas. These efects are subtle and can be observed but not easily proven, because for a sceptic who wants to debate this, there will always be an alternative explanation to all we observe.

This is the main reason why we are not seeking approval by accademia or the political sphere. 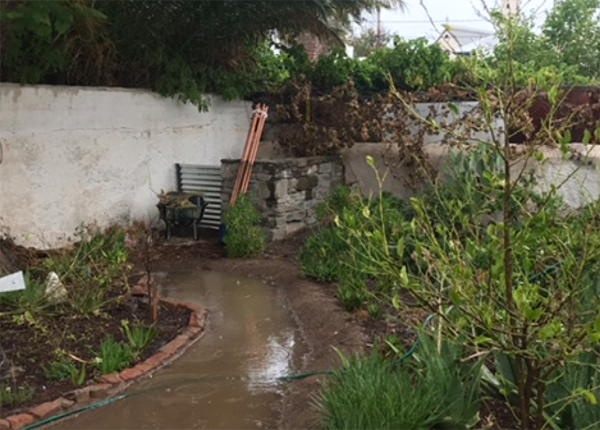 This GANS enhanced CB in Aberden, Karoo has definitely triggered some nice rain. Aberden was the starting and end point of our little trip. 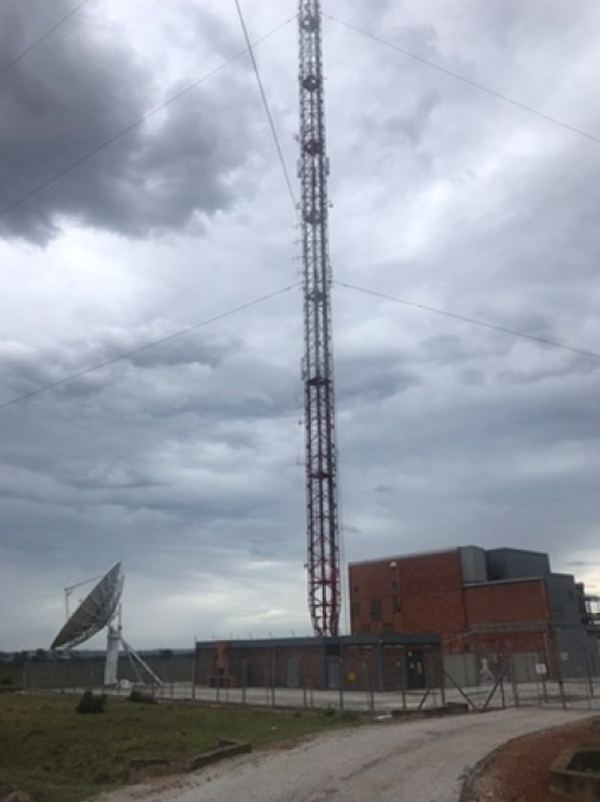 So, here we are in PE where our friend Glen has done some good gifting. We leave the full coverage of the city to him and just placed some TBNs around this monster tower on the outskirts as well as some other sites that we happened to come by.

PE has gotten some nice rain recently, so we are not too worried even thought they tried to pull the water scarcity stunt there as well. 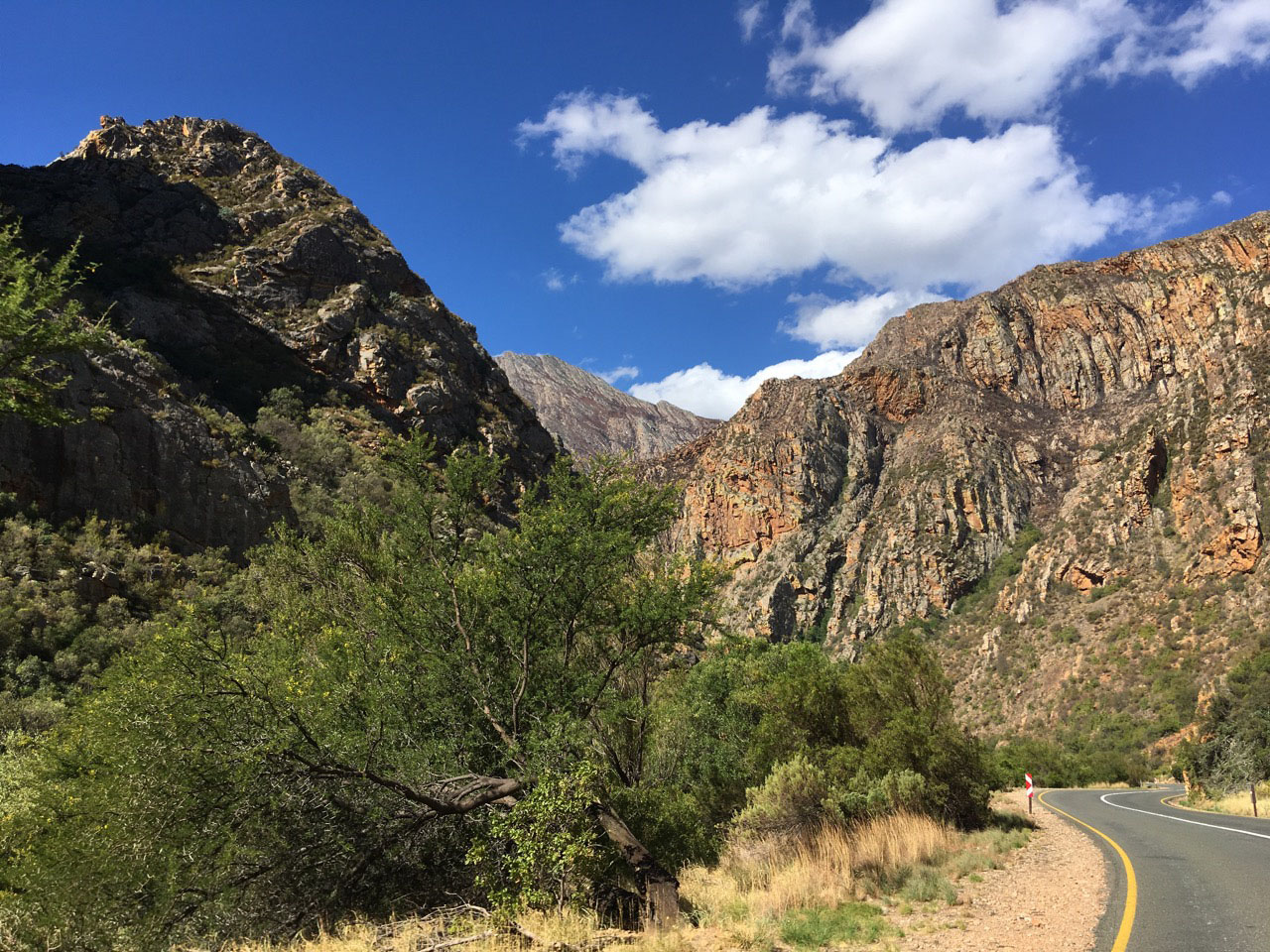 Off we go onto he road parallel to the main coastal highway, through some magical scenic landscapes..

After meandering through the mountains for 2 days, via such beautiful places as Prince Albert and Barrydale, we reached Cape Town to leave our next GANS enhanced CB right in the middle of it. 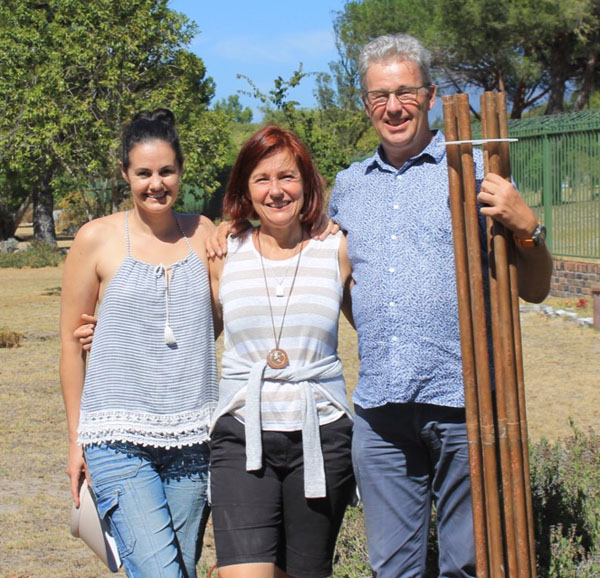 Friederike and I with Crystal, host of our latest CB in Cape Town 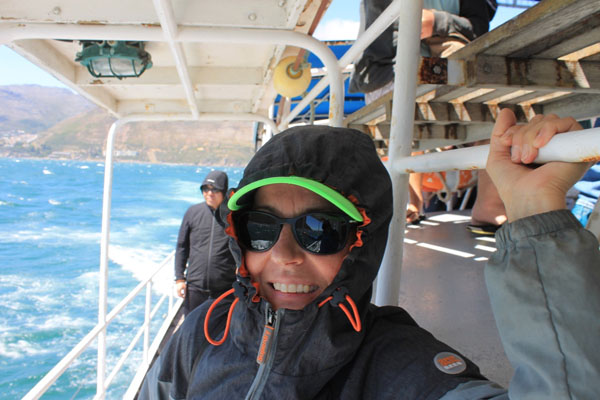 Short of a luxury Yacht, we embark on one of the countless tourist cruises to drop a few of our potent Keshe balls into the ocean.

The dolphins may well pick them up and put them in the right spot. 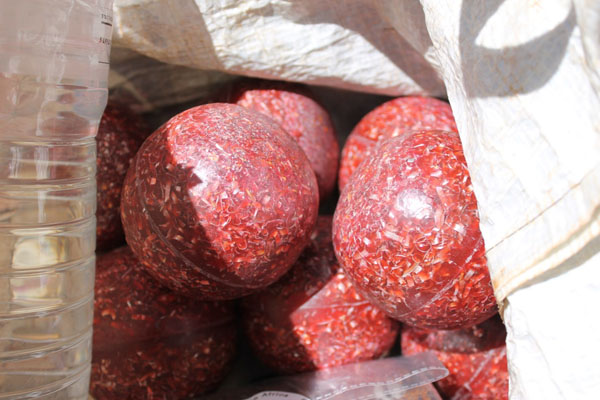 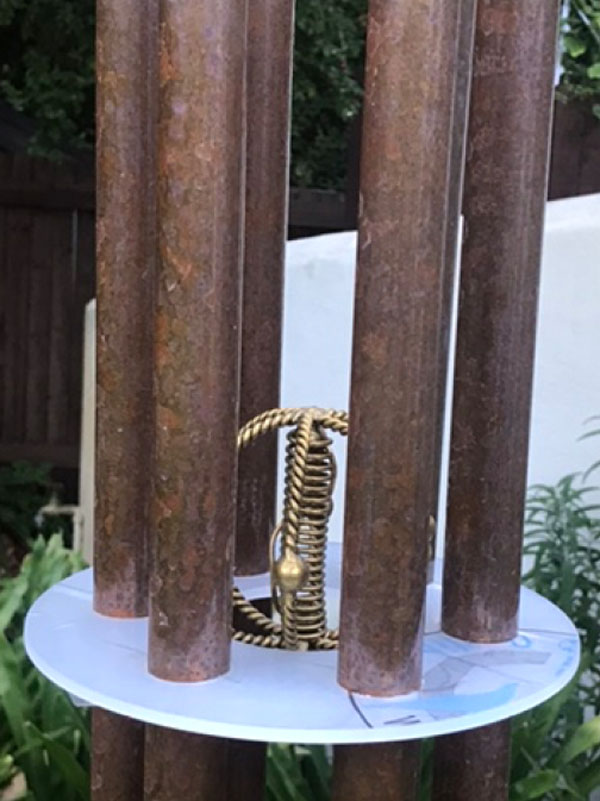 Our friend in Somerset West has put this lovely "agricultural harmonizer" from Jim Spurling onto her CB. All genuine orgone technologies enhance each other. 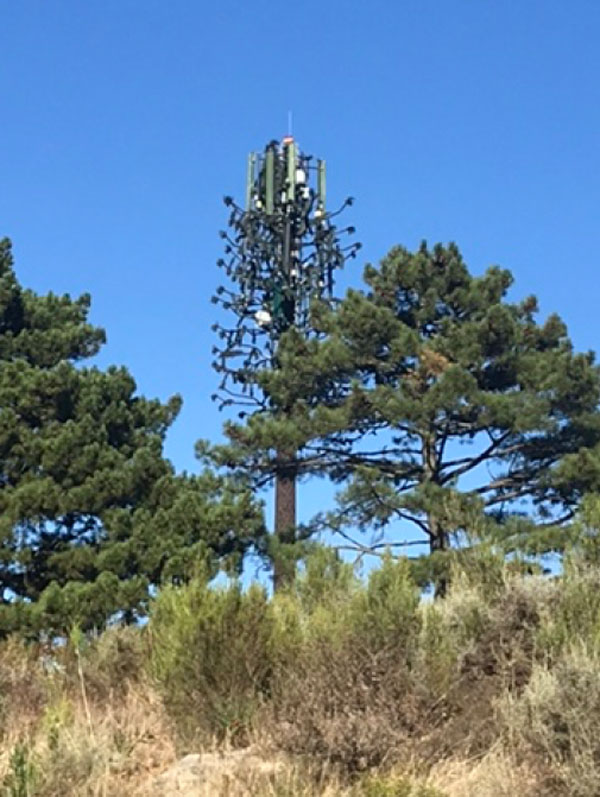 Leaving Cape Town: On our way to our next and final destination between Beaufort West and Aberdeen, we took the detour through the apple growing region via Grabouw and Elgin and past the almost empty Thewaterskloof Dam. Another road less travelled (and gifted)

The second CB for this trip was destined to go to traditional Khoi San healer Oom Johannes and Antoinette Pienaar. Oom Johannes is 98 years old and of great vitality. he picks herbs in the veld every day and and has the gift of seeing many things that "normal people" do not see.

We love bringing orgonite to the genuine traditional healers as they invarialbly perceive it's positive effects. 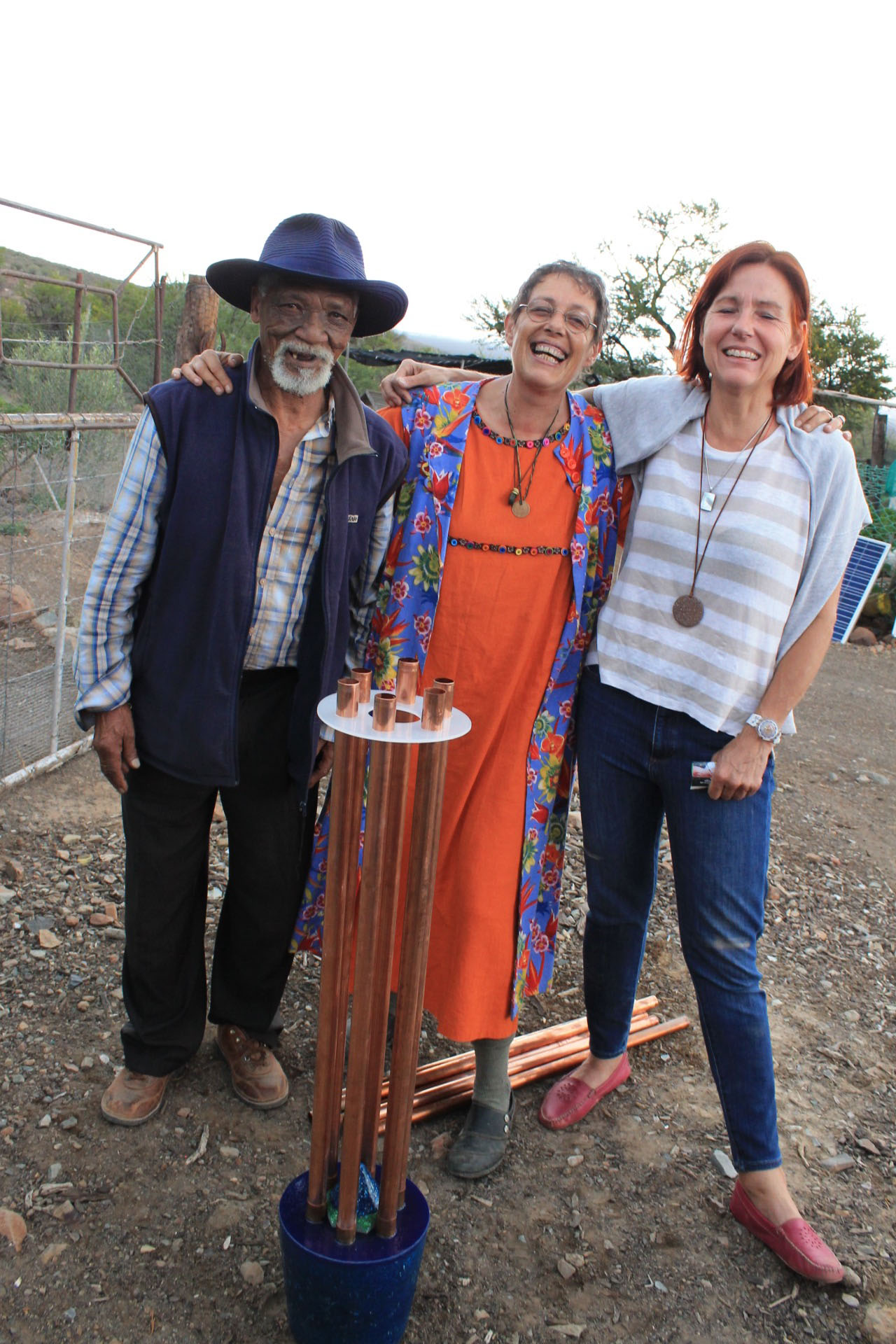 Oom Johannes, Antoinette and Friederike. We did not put the full pipes on because Oom Johannes felt that the CB should find it's final place at a very special spot. (where the watr snake lives, a type of spirit that used to dwell in every spring in the Karoo. Obviously the disrespect for such "Superstitions" has contributed to the desiccation of the landscape. 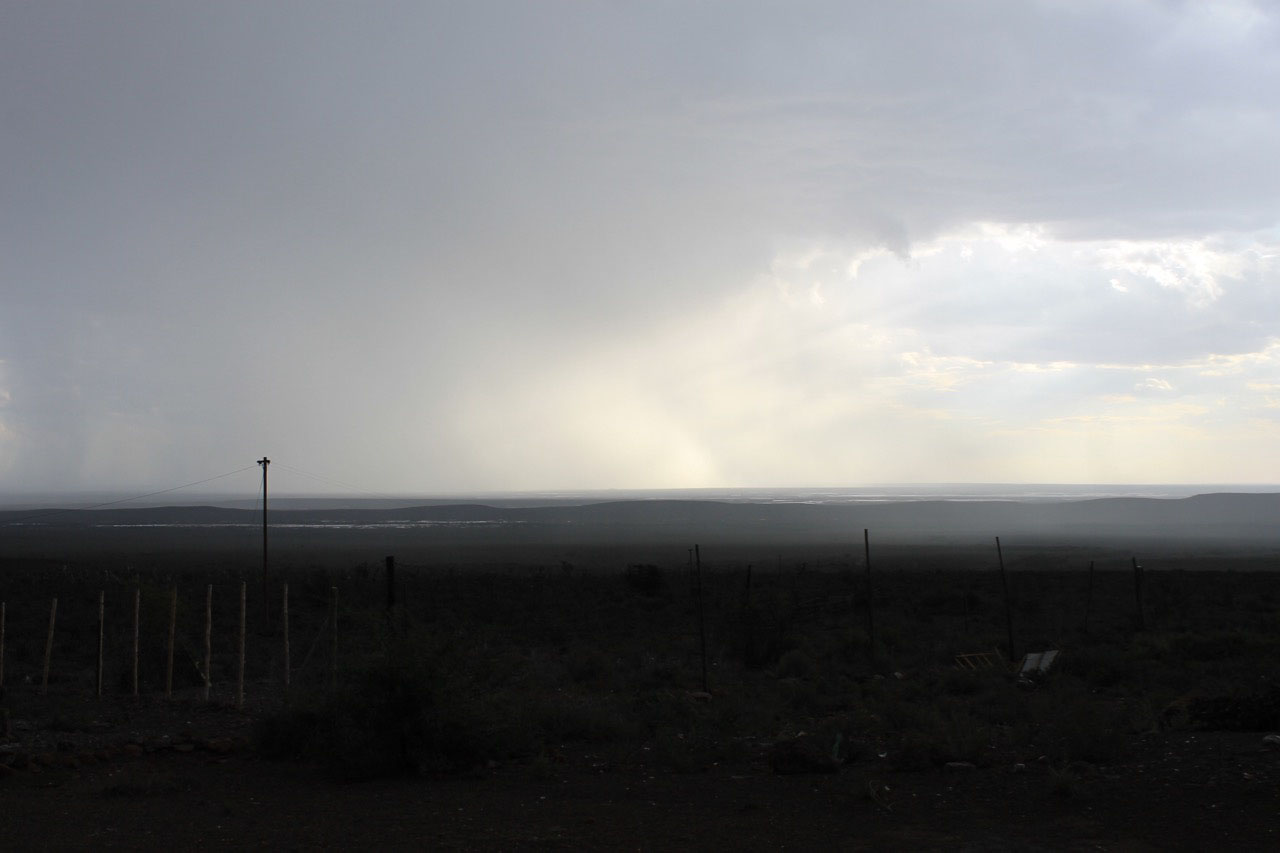 Here our reward: massive rainfall over the Karoo, wide and far. We decided to stay the night and even in the morning some of the dirt roads had turned into a mud bath. 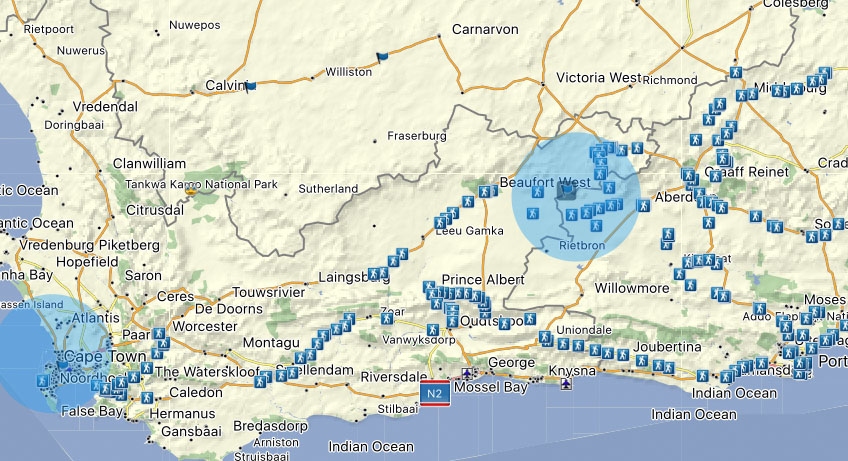 The little squares indicate towerbusters and other small orgonite gifts. The flags with the translucent blue circle around show the new CBs.

This is of course only the first small installment of our biggger project to properly protect the Cape from all that weather warfare. 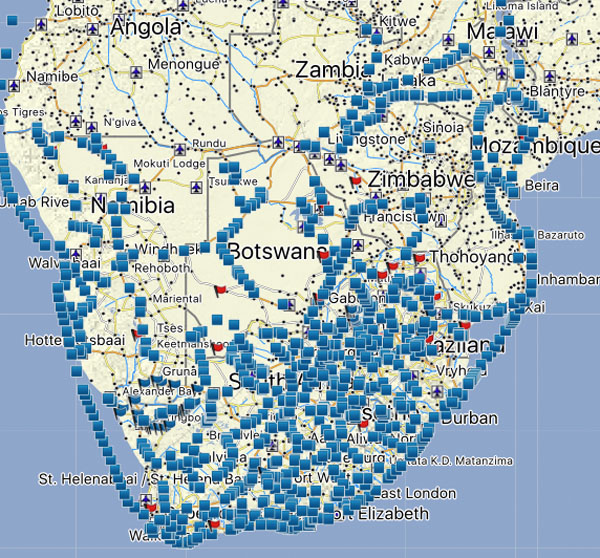 Our gifting efforts in Southern Africa so far. The little red flags indicate Cloudbusters planetd by us, but they are not all visible, lots of them crowded out be the little blue squares indicating Towerbusters or other small orgone generators.

You can support our ongoing gifting efeorts by buying one of these two sponsorship products below or in fact any other product. When we have surplus, we can gift! That's how simple it is.