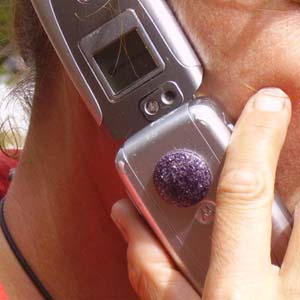 In stories of wizards and sorcerors, magic amulets allowed long distance communication, glowed and had many other magical properties. Our modern day cell phones sound remarkably similar, but who would have thought that using them would have a price tag attached for health (ref Dr Mercola; cell phones biggest health risk since tobacco) ? As we become more and more amazed – and reliant – on finding our way using googlemaps on our phones, playing games, sms’sing for hours in chat rooms, writing email, we carry on touting cell phones even though many of us have that nagging feeling that something just isn’t right.

Some of us get really obvious symptoms, like a hot or sharp feeling in our hand, a headache, a sharp pain in our ear. Some of us notice nothing physical, but can’t help noticing the growing body of evidence that all is not well for cell phone users. I was sent the email about the egg being cooked between two cell phones in under a minute from many friends, yet how can we resist the pull of the magical amulet and all its wonders?

For me the answer is not to stop the world and say, “I want to get off!” but rather to mitigate the consequences of my use. Prior to the release of the mini-shield for phones, I would make sure that all my EMF generating appliances, my plug points, local cell phone tower and so on, had orgone-ite on them. My theory was that since I generally feel better I could take a few extra minutes on the phone if I wanted to.
But then the affordable, portable ‘personal orgone-ite’ for cell phones made its appearance. With the latest evidence about the orgonise-africa mini-shield, and more importantly, the addition of the coil to their production line, I’ve noticed that even on longer calls, my physical symptoms have gone. I don’t think its a get-out-of-jail-free card; I really think cell phones are wildly potent electrical devices which sit right next to our brains – and that will never make me comfortable. But I do know that orgone-ite has saved me from being a constantly stressed person, and with a healthy nervous system I can continue to make mature and informed choices about my health.

Georg’s recent experiment about sprouting chickpeas with water charged by cell phones, and others with water charged by cell phones with mini-shields on, was a resounding success for the orgone-ite community. I have always rooted from the sidelines, but to have more and more ‘real’ proof about what I already feel in my body is gratifying; orgone-ite stops the harmful effects of EMF. Period. We’re growing up, slowly, as a species; making our mistakes…  and thinking again. I believe orgone-ite is a part of that process. It seems humanity’s inventions, at present, are very much like all the young wizards making things blow up by accident in Harry Potter. I see orgone-ite as that extra little protective charm that stops you blowing yourself up by mistake too! I think its will also makes the best stocking filler at Christmas.