Namibia in the aftermath of Operation Desert Rain!

Since we started busting the secret underground bases in South Africa with orgonite -from where the illegal electronic weather warfare was conducted- we experienced unprecedented rains on the subcontinent.The planting season which is normally from October to April/May was again predicted (read : planned) to be a drought season albeit not in the same hysterical fashion as the 3 years before. The perpetrators must have learned to cover their bets since the previous planned droughts were all broken by our massive orgone-ite gifting efforts. Of course it's difficult for them to change the song sheet in the middle of such a large scale operation, so we continue reading "scientific" background articles about global warming etc. That's intended to prepare the mood for a few catastrophic droughts of course.Someone very smart has invented the term "global dimming" by now as a hedge theory, in case the "global warming" scenario doesn't happen. In this dimming scenario, pollution (of course no mentioning of the ubiquitous chemtrails) is counteracting the effects of "greenhouse gases" and leads to a decrease in temperatures, unfortunately with much sickness and other side effects because of the toxic brew. (Again no mentioning of the worldwide illegal spraying programme) I first heard of this interesting propaganda twist a few month ago in a BBC Documentary.Be all that as it may, the healing continues in a visible way that cannot be ignored by the mainstream much longer.The rains started a bit late and in fact only got unlocked after our attention turned towards those underground bases in earnest which was in December 2005 and January 2006.Since then average rainfalls as measured over many years have been exceeded massively.This is what we measured at our place (Johannesburg):October 2005 (Kalahari Expedition)

The rains were well distributed over the whole region and especially Namibia experienced rainfall like they never observed in the whole 20th and 21st century.This map shows the rainfalls in South Africa in February: 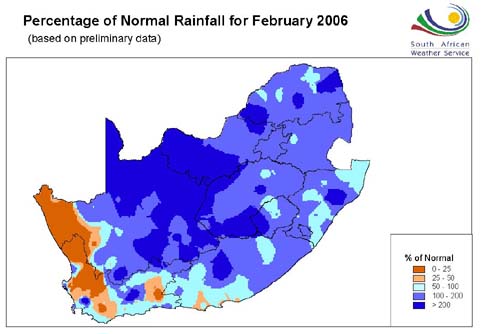 As you can see, the rainfall almost everywhere is between 100 and above 200% of normal.An exception is the Western Cape and the West Coast in general, that is still experiencing dry conditions. The Westen Cape is for most parts a winter rainfall region however and therefore the dry condition in Summer is less significant in my opinion. 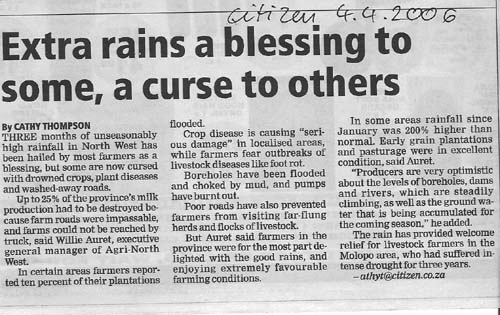 Rain in neighboring countries On our trip through Botswana and Zimbabwe we found both countries green and lush like I've never before seen them. 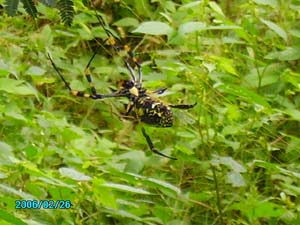 Fat spider in lush greenery in Zimbabwe But the most exciting news reached us from Namibia that we had busted in our "Desert Rain"expedition in September 2004.My friends there tell me that the desert is covered with a beautiful carpet of blossoming greenery and generally nobody can recall anything like that, even back to 1900 or before. 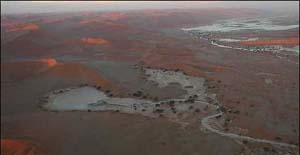 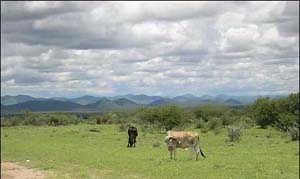 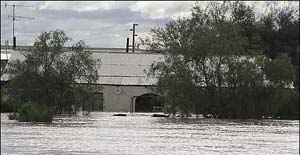 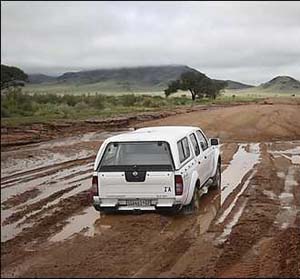 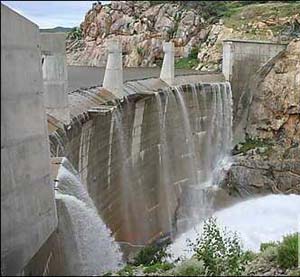 The Namibian, Tuesday, January 24, 2006 - Web posted at 7:08:44 GMT Farmers' unions optimistic after the rains *ABSALOM SHIGWEDHA THE Namibia Agricultural Union (NAU) and the Namibian National Farmers' Union (NNFU) are hopeful that farmers will get a bumper harvest this year because of the good rains that have fallen since the beginning of the year.NNFU President Manfred Rukoro told The Namibian on Friday that although the rain came a bit late, the good showers that are falling countrywide at the moment have brought smiles to the faces of many communal farmers."We are very, very happy.This looks like a promising year," said Rukoro.He said towards the end of last year, many regions were on the verge of starvation, but the good rain that started at the beginning of this month raised hopes for a good harvest this year, especially if it could continue until April.The Executive Manager of the NAU, Isak Coetzee, shares the same views.He said the NAU was very glad about the good rains and expects good prospects for crop and livestock farming.He said although there were still some areas in south-eastern Namibia that had received little rain, it was still early in the season and more rain had been predicted to be on the way.The good rains have also raised the levels of the country's main storage dams higher than they were at the same time last year.According to NamWater's latest dam bulletin, the Von Bach Dam is 67,8 per cent full compared to 37,7 per cent last year.The Goreangab Dam is overflowing at 102,8 per cent of full capacity, while the Hardap Dam at Mariental is 61,4 per cent full compared to last season's figure of 38,4 per cent.