After our aborted Great Africa Orgone Safari (see "The Prisoners of Orgone) in July 2006, continuing the spread of orgonite in East Africa has been my main priority. All the orgonite that was destined for Tanzania and Kenya was sent there to local gifters who are distributing the tools to appropriate places.So it came in handy when I saw an advertisement of a cheap holiday package for Zanzibar in the newspaper. 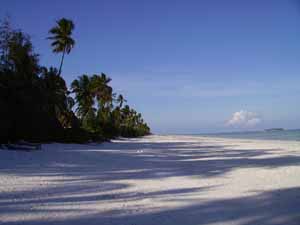 Yes, Zanzibar has those dream beaches...We all (that's Friederike, the Kids, my mother, who was visiting from Germany at the time, and I) went together on a family holiday there, using our combined luggage allowance to bring in a CB, and some 150 other orgonite tools.>Zanzibar is a tropical island, off the Tanzanian coast, close to the former capital (which is still the economic hotspot of Tanzania), Dar Es Salaam. 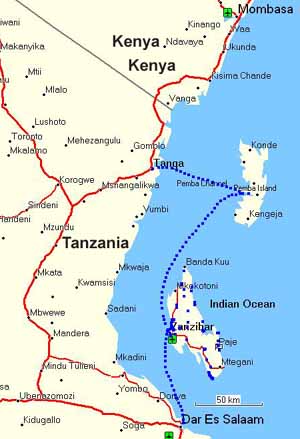 This map shows the Zanzibar Archipelago with the 2 Islands Unguja (often referred to as Zanzibar) and Pemba.

The blue dots represent orgonite gifts, the little flag symbol represents an orgonite CB. Another orgonite CB is already doing work in Dar Es Salaam Zanzibar used to be the seat of the Sultan of Oman, who controlled the East coast slave and ivory trade from there.The Arab influence is still strongly visible in the buildings and decorations of Zanzibar City, also known as Stone Town. The vast Majority of inhabitants are also Muslims as a result of this history. 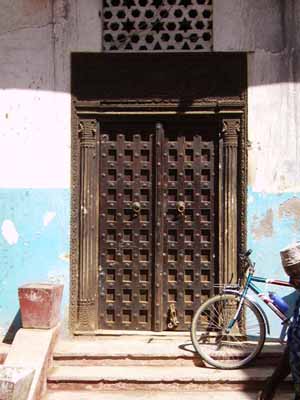 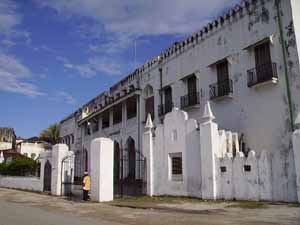 Sultan's palace near harbour Even though Zanzibar is an international tourist destination, westernisation has so far not gone very deep. There are no shopping malls or super markets on the island, all commerce is conducted out of traditional small shops. The island is quite densely populated and most of the population seem to be poor, but not desperate. After all they live in a tropical paradise that produces food of all kinds in abundance. Despite it's international fame as an architectural monument, Stone Town lacks any signs of prosperity except for some very small pockets of luxury.Is it a coincidence that the most expensive hotel on the sea front is so very close to the offices of UNICEF and the WHO?A sanitation or storm water system seems to be largely non-existent with the effect that urban areas drown in a sea of brown mud with very major rainfall.

Apart from its dreadful history as a centre of the slave trade that devastated East Africa for centuries, Unguja, the main island of the Zanzibar archipelago is a renowned centre of Arabic magic as much as its sister island Pemba is a known centre of African traditional healing and witchcraft.Having gifted these places may thus have repercussions in the etheric realm beyond our imagination.As if additional recommendation was needed to point out the place as a worthy target for a gifting expedition, a few months ago a mysterious event led to more than 400 dead Dolphins being washed ashore.The psychics at the Etheric Warriors Chat (www.ethericwarriors.com) saw a group of American submarines operating in those waters with the aim to fight and possibly destroy as many as possible of our powerful etheric allies, the dolphins. (We blasted them good, I think)Additionally we had information on 2 suspected underground bases on the island.

When we arrived at our destination on the South-Eastern coast of Unguja (the main island of the Zanzibar archipelago), the temperatures were extremely hot, with humidity near or over 100% and the whole atmosphere felt very oppressive and negative. Since we arrived late at night, we could only put up our CB the next morning. And what a difference it made! Friederike and I went on an orgonite gifting tour of the whole island in a rented 4x4, while the others were relaxing at the beach. Outside of Stone Town there were only a few microwave transmitters, and I'm sure we got them all. We also put orgonite in the rivers whenever we crossed one.Zanzibar Town had quite a few death force transmitters. 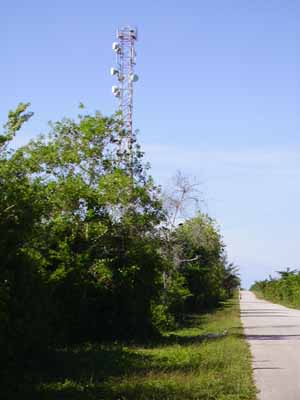 Transmitter site at the north-eastern coast Even though it stayed hot and humid, the atmosphere changed from hazy and oppressive to a crisp and clear sky with nicely articulated cumulus clouds (initially forming a great ring around the CB) almost instantly. We also got daily rain showers for the time we spent on the island, quite in excess of what is considered normal for the season.Those showers were short, intense and very refreshing.

We had hoped to make this little outing a great get-together of all gifters active in East Africa. So we had hoped for Doc Kayiwa from Uganda, Judy Lubulwa, David Ochieng and others from Kenya and Dean from Dar Es Salaam to come over for some exchange of ideas and recreational gifting sorties.Of all the above mentioned, only Judy finally made it, accompanied by her 18 year old son and his friend of the same age.Their trip had been hampered by all kinds of obstacles that seem almost too much for coincidence. The same may be true for those who did not make it.Even though it was not to be the big get-together we had anticipated, meeting Judy in person was great, since we had been corresponding a lot before. I was excited to find her a lively and resourceful "go-getter" person, just like she seemed to be in her emails and forum postings. gifting the island, including the location of a suspected underground base at the northern tip.

Judy, her son Myna, Friederike and I near the busted UG base

Taking the ferry from Dar to Zanzibar and then on to Tanga, just south of the Kenyan border via Pemba island, Judy was able to lay quite a trail of water gifts throughout the Zanzibar strait, (See map on top of this report) those sensitive waters where more then 400 dolphins were killed by the US Navy in mid 2006. Great stuff! Judy was to continue her water gifting run from Mombassa a few days later.

We finally did it: swimming with the dolfriends

It's been on the cards for quite some time, so it had to happen this time. Lots of expectations and also some apprehension had built up in me about this mystical encounter with our etheric comrades in arms...Zanzibar has a small, luckily totally unregulated, industry of dolphin encounter boat trips, starting from the South-Western Tip of the island, where the otherwise continuous coral reef has a gap, allowing for encounters in not too rough waters.So, out we went in a lovely boat, just like 4 or 5 other parties in their respective boats. 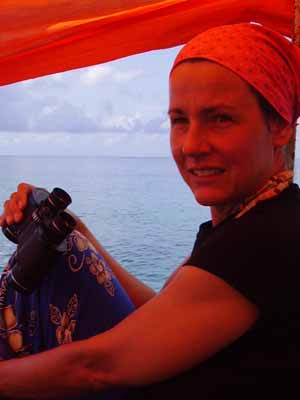 Friederike on the Boat The skippers of those boats are in contact via radio or cell phone, so that after a while of lingering out there waiting (not without tossing a few marine orgone gifts of course) we got notice that a large pod of dolphins was sighted further north, coming towards us. 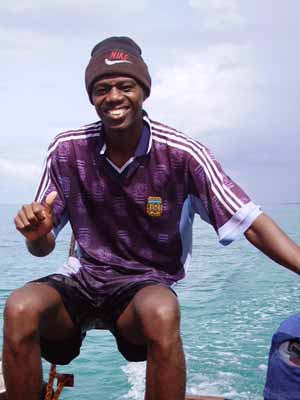 Our Skipper Unfortunately about 5 boats had heard the same call, so there was quite a feeding frenzy with tourists hopping into the water all over the place and we just in the middle of it.

see the dolphin fin in the distance?

So maybe it's no surprise that nothing mystical happened to me, and yet it was a great experience to hear their strange and beautiful sounds in the water, the high frequency squealing overlaid with fancy electric clicks.In fact their sounds are very audible in a very transparent way and one gets a totally different feeling for the vastness of space in the ocean.It's like their echo sounding gives you a full 3D rendering.It was a large pod and we encountered dolphins swimming under and besides us for quite a while. My kids came very close once or twice. They said they came up to 30cm, but hey, kids love to brag a bit, don't they? 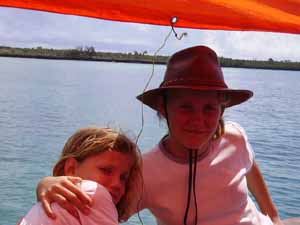 The Kiddos on the Dolphin Tour

Zanzibar is well busted now and a stretch of some 350km of Indian Ocean has been gifted in this sensitive and important area. According to Judy, Dar Es Salaam also already looks quite good due to the gifts we have sent to Dean some time ago.Obviously there's lots of work still to be done in Tanzania and Kenya. Kenya has at least 2 CBs now and so has Tanzania, but what's lacking is a full coverage of the area with TBs. There are still lots of un-busted death force transmitters and underground bases.Our East African associates are all lacking the resources needed to do such a job quickly by car, so orgone delivery is a slow process of filtering through, passing from hand to hand and the occasional outing with busses or minibus group taxis.Judy has put the second CB up in Northern Kenya where the monstrous New World Odor was busy engineering one of its famous drought emergency crises, complete with refugee camps, emaciated babies and the usual horrible footage blasted into the homes of mind controlled westerners to enhance the view that Africa is a hopeless continent...As we all know by now, a few CBs and a few hundred TBs can stop all this nonsense forever. Wherever such a manufactured crisis shows up, it can be quickly reversed and the place turned around, creating paradise on earth in the process.So, while we are still waiting for the big sponsor to show up, who will give us 5 million US dollars (as long as these un-backed "Federal Reserve Notes" still buy anything) to sort out Africa, the next best thing is to help us with smaller contributions or by massively ordering he good stuff from us.Sponsorships are available on our website (see below) and these sponsorships enable us to send orgonite to our partners in Africa in order to ever intensify the network of gifted areas and make manufactured droughts ever more difficult to materialize. Eventually, we believe, massive orgone gifting will help Africa to awake from her century old trauma induced slumber and take her rightful place among the continents of the world, in full command of her creativity, spirituality and abundance of mental and material resources.Friederike and Georg Ritschl