Global Warming not happening either

The next of the crumbling pillars of the current NWO mind control script is the dual complex of  "Global Warming" and the expected (read: planned) "Wars over Water". Very recently I read that powerful figures in the US openly propose to make it a criminal offence (aka "hate speech")  to question or doubt the alleged fact of Global Warming. Will the crime be called "Global Warming Denial"? This would then put it o the same level as the Holocaust dogma of which not a single detail may be questioned however well documented the contrary evidence may be. (The end of history as a science based on free enquiry of fact) After all: The post WWII order of Europe and the world rests on blind acceptance of this dogma. Let us enjoy our last moments of free speech, which is after all the true foundation of freedom and prosperity. You will notice the difference when it's finally completely lost. OK, most of the world that I know is presently rather fighting to get away from the water... Even ordinary people who normally believe the official story are now wondering "if the scientist's haven't got it wrong" about the global warming. What a joke! The Northern Hemisphere covered in record snow falls with crisp clear frost, the Southern Hemisphere innundated in water. Water tables and surface water boodies being replenishedeverywhere.

So, where is the global warming?

Warmists are a shifty, slippery bunch, so they'll tell you now that all the extra precipitation and with it the chilly (not warmy!) weather comes from the melting of the pole caps that has released additional water into the atmosphere... Har, har, har! Whenever they want to shoot down anything we (the dissidents) say, they talk of the famous "Occam's Razor". What it means is that you should not accept a complicated explanation when a simple one does explain the observed facts perfectly well. The simple explanation - Occam's razor - is of course that there is no global warming. You may have already noted the irony when the attendants of the second last climate summit went about their dreary business in one of the coldest European winters in Copenhagen about a year ago. And now again: The Northern hemisphere covered in super sized snow falls, while the Southern part of the globe is experiencing record rains. 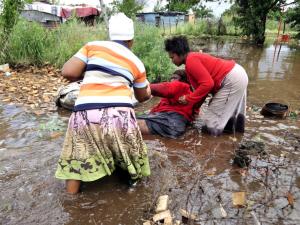 Record rain falls where I live: People struggling with flooding 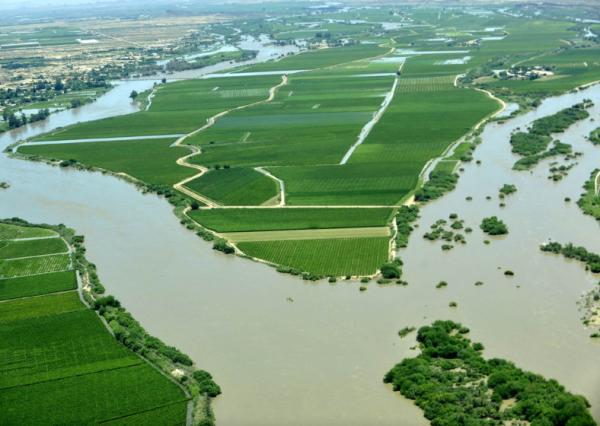 Record rainfalls in "semi arid" South Africa lead to flooding of Vaal and Orange River. This is the semi desert Karoo a few days ago 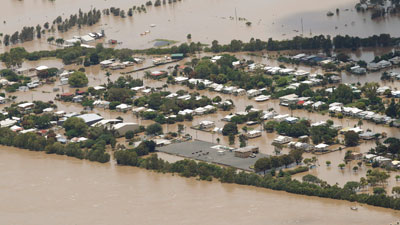 No Global warming in Queensland Australia either, it seems, rather global chilling.

Surely, all this will now be chalked down to "climate change" and attributed to the same complex of alleged consequences of rising CO2 levels in the atmosphere. It is exactly the opposite of all the "predicted" scenarios that were giving us the picture of a dryer and dryer planet with ever more dwindling fresh water resources. The water tables have not been higher in decades here in South Africa. So, despite the individual suffering that the floods may mean for those affected, I see it as a healing process on a planetary level.

So, is Global warming happening? It is possibe that they tried for it with all their atmospheric heaters, HAARP, the cellphone towers, all the secret military ENMOD weaponry. Most of that is by now neutralized with the orgone movement having become virtually a worldwide phenomenon. I think, the massive infusion of positive energy starts to overrule the negative agenda on many more fronts than we can imagine at present. Orgonite is tipping the scales. There are areas where the darksiders still enyoy free reign and that's the high seas and the arctic and antarctic regions. I'm sure they do a lot of damage there. We have long said that the sea is the new frontier for orgone gifting and we stick by that. Get on whatever long distance cruises you can book andthrow 100s of little orgonites each time you're out at sea. You won't see dramatic results immediately but you're helping to tip the scales. There are cruisesinto arctic waters as well along the Nowegian and Alaskan coastlines. Do that!

The "Green Agenda" is the corporate agenda now

But why is warmism so important to them: The green agenda which may have started or at least fed from a genuine protest potential and a wide spread wish for harmony and healing has long become the corporate agenda, the agenda of global control. Presently this agenda presents itself in first world countries as what I call "fascism light", political corrrectness and an increasingly strangulating web of microregulation of our lives instead of rifle butts and concentration camps. They're trying it in a sweeter package this time. They let the banks do the job directly, since we're all hooked into their money scam. Fascism is commonly defined as the rule of the corporations through a more or less militant opressive oligarchy. The degree of visible militancy may change, the agenda is the same. Surely our opressors now allow us to wear colorful T-shirts instead of brown or black uniforms and promote outward individuality. As long as all of you do more or less the same, (consume, produce and distract yourself) they love it when your uniformity comes themed in shockingly different styles. We now know that the Bolshevik Russian "revolutionaries" were also owned by the corporationsso there was never a difference. They just experimented with differend styles of oppression for a while and now it's funky Coca Cola fascism ("be all you can be!") for a while but the Gulag or KZ are always an available option to them. (concentration camps for 2-3 million people are ready for action in the US + lots of modern guilloutines to make a lot of dissenters a head shorter) Not far from their heart either. Don't be mistaken.

Wars over water - the next wave

The present wars are unfolding according to the battle plan laid out by Samuel P. Huntington's book "clash of civilisations" 20 years ago. This book was seminal in justifying and preparing the post cold war strategy for the corporate world order. It basically proposed that after the falling away of the to large blocks of communism and capitalism, conflicts would break out along the old cultural divides, naming 4 main cultural blocks: - Western Christianity (Euope, Anglosaxon world, The Americas) - Eastern Christianity (Russia, Serbia etc) - Islam (aren't they all terrorists anyway?) - Asian cultures, the Hindu-Confucian-Buddhist world And don't you see it unfolding exactly that way? I have made it a habit to read these "prognostic" books, written by elite think tank members like S.P. Huntington, Robert Kagan & Co. rather as battle plans then prediction. Try it for a while and you'll have sudden insights into the greater lines of what's happening in the world around you. Replace the word "prognosticated" and all it's synonyms with the words "planned" or "intended". You will see how things suddenly make sense: So, instead of reading: "It is expected that the next wars will be fought over access to dwindling water resources", you can now get the proper meaning as: "we shall orchestrate and propagandize scarcity of water resources in many parts of the world such as to incite wars over water in order to further our overall agenda of drastic population reduction." Of course this will mainly target third world populations who have been marked for extreme thinning long time ago and branded as "useless eaters" by no other than the notorious Henry Kissinger.

It all ties in nicely: - AIDS (a fake pandemic, mostly a ruse in order to make the mass distribution of extremely toxic poisons sold as the medicine for the pandemic palatable to the target population) - climate change (the name that's going to replace "Global warming" in a fallback operation to save face after no warming is really happening) - The "war on terror" - The imminent collapse of the financial system We live in interesting times indeed. These times of change are of course full of chance, for example the chance for us to leave all this behind and decide on a much better trajectory for the future of humankind on this planet. I will talk more about the financial system next time as it's the next crumbling pillar to look at. Read more of my blogs on global warming and related issues!