Orgonite gifting: What's been done and what's left to do

The picture below shows the distribution of orgonite cloud-busters in Southern Africa.Every flag is a CB. There may be others, unbeknownst to us, but we doubt it. About 50% of these CBs where put in their position by Orgonise-Africa, mostly as a gift to the respective community. Some of these where generously sponsored by friends from all over the world.The others were purchased by individuals either for deployment on their own property or in a selfless effort to contribute to our common goal of defeating weather manipulation and it's major result, drought, in Southern Africa. This is particularly true for one individual who wishes to remain unnamed, who has single-handedly covered the whole of Botswana with 14 orgonite CBs so far and gifted countless DOR-Transmitters (cell phone towers) with orgonite TBs. 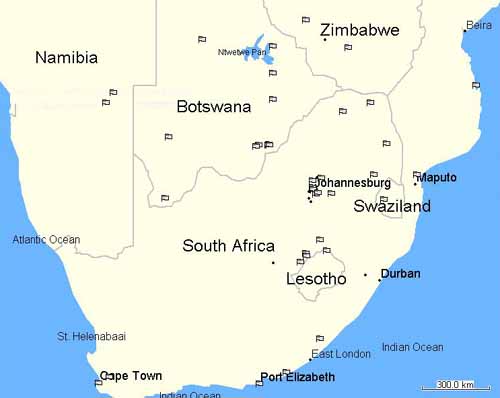 Distribution of orgonite CBs in Southern Africa as of August 2004

The Picture below shows the tower-busting effort so far. Blue dots are busted sites.The yellowed resp. darkened areas are indicating zones we consider fairly well orgonised for now.Sometimes this does not coincide with the distribution of blue dots. In this case it indicates that other teams have attended to the area with our knowledge. 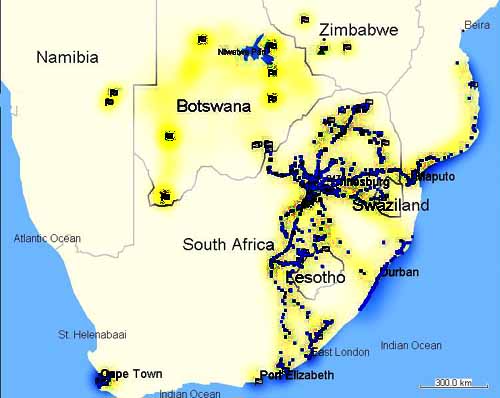 Orgonised areas in Southern Africa.Naturally, because of our own location, our efforts have concentrated in the eastern part of the subcontinent. This has been added by the massive deployment of CBs and TBs in Botswana and the Sale of 2 CBs into Namibia.The western coastline of South Africa and Namibia must however still be considered an emergency zone.Rainfalls there have been far below average and that in an already arid and ecologically fragile environment.This is the reason why Namibia and the west coast of southern Africa are so high on our agenda now. To complete the coastal orgonisation project, the part from Cape Town to Port Elizabeth will have to be included. Our recent experience shows the importance of the coastal areas for the free flow of orgone or life energy and the unhindered influx of moisture to the interior. 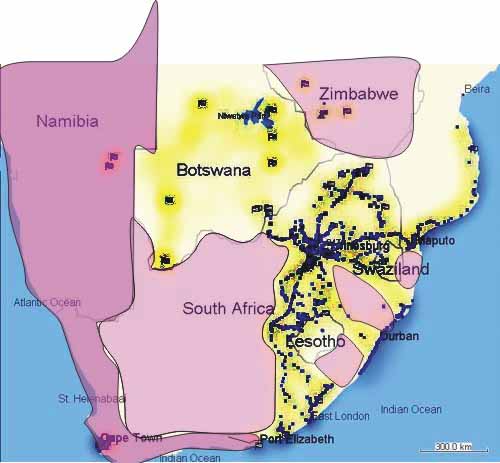 Map of priority busting zones.The darker purple indicates our priority targets, to be completed in the next 4-6 months. The lighter zones are also important but will have to wait somewhat longer, if nobody else takes initiative there.Especially the arid zone of the central interior (Karoo/Kalahari) will be interesting to watch, as we are confident that we could easily reverse the centuries of desert forming influences and change the climate characteristics there back to the fertile, lush environment it once was, in not even prehistoric times.You can help us complete this herculean task by sponsoring a cloud-buster or contributing any amount affordable to you as a donation or simply by sourcing your orgonite, zapper and general healing needs from us.